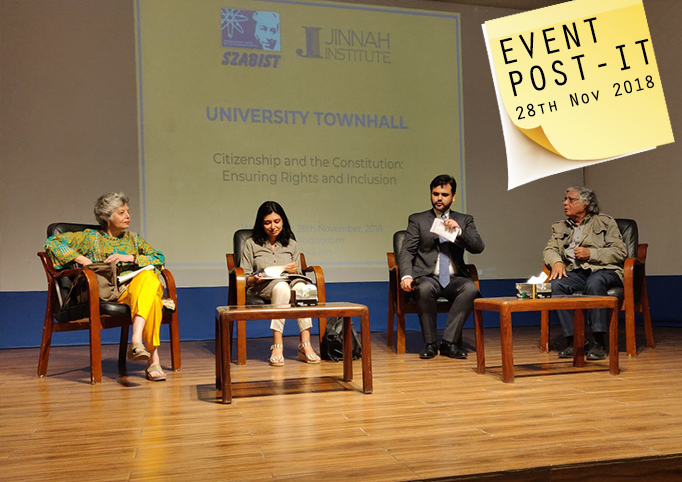 Citizenship & the Constitution: Rights and Inclusion

With ever increasing human rights violations and curbs on fundamental freedoms, it is important to reassert the notion of citizenship in a democratic polity and underscore the demands that citizens can make of the state, emphasized experts at Jinnah Institute’s University Townhall held at SZABIST Karachi on 28th November, 2018 titled ‘Citizenship and the Constitution: Rights and Inclusion’. Prominent human rights activists and practitioners Zohra Yusuf, Ghazi Salahuddin and Sara Malkani spoke at the panel discussion moderated by Jinnah Institute’s Salman Zaidi.

Ghazi Salahuddin stated that fundamental rights enshrined in the Constitution have to be reinterpreted in every era to give them new meaning according to current social and political transitions. This is best done by citizens themselves who possess rights in return for civic responsibility towards the state and fellow citizens. However, this cannot be achieved without developing a sense of empathy, which is lacking in contemporary Pakistani culture. He related how student unions once formed the critical link between political parties and youth, but this link was severed during General Zia’s dictatorship and created a huge loss for political participation. Salahuddin reminded the audience that citizens have the right to protest, make their grievances known, and demand protections from the state. He also pointed out that the consumption of fake news leads to intolerance, strife, bigotry and prejudice in all societies, and students should be conscious of this trend while making decisions about the causes they support.

Drawing on her experience as a human rights activist and former chair of HRCP, Zohra Yusuf provided an overview of freedoms that Pakistan’s constitution guarantees its citizens, including the freedom of thought, conscience and religion. She explained that some of these rights are subject to the conditions of public morality or state ideology, which means that the state gives certain freedoms to its citizens on the one hand, and takes away those very freedoms on the other. Citing the Asma Jilani case, Yusuf touched on the history of Pakistan’s civil rights movement that successfully overturned draconian laws through consistent, decades’ long struggle. Until recently, the blasphemy laws were discussed in the public domain, but have become politicized to an extent that any open discourse over blasphemy runs the risk of endangering lives, she stated. Yusuf underscored that public accountability on human rights must be ensured by engaging political parties, so that governments do not lose sight of their responsibility towards citizens and international commitments.

Sara Malkani explained that the state often violated the Constitution itself by withholding rights from citizens. There was a fine distinction between rights guaranteed to citizens, and right for all persons. By virtue of being a citizen of the state, recourse to the law can be taken to demand an end to rights’ violations. Malkani observed that those in power have been reluctant to grant the full measure of freedoms to people, and it is through the dedicated political activism of rights leaders that we enjoy citizenship as it is today. She cautioned those who question Malala Yousafzai’s role as an international icon for girls’ education, stating that by vilifying Malala they unwittingly undercut the cause she represents.

The panel discussion was punctuated by casual opinion polls the moderator took by asking participants to raise their hands on issues they supported to get a sense of participants’ ideas of citizenship. The panel interventions were followed by several rounds of question and answers, followed by a vote of thanks to the panelists and SZABIST University.

This event is part of Jinnah Institute’s countrywide discussions at university campuses seeking to engage youth in policy debate and practice.