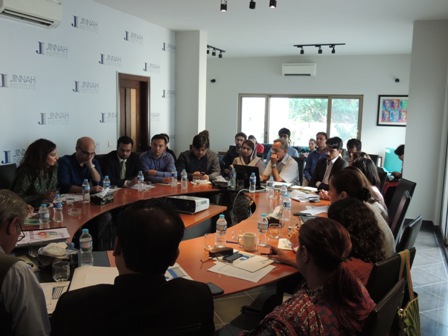 During the course of the two-hour discussion, senior education expert and former teacher Dr. A.H. Nayyar presented select findings from his research on textbook content and curricula reform in Pakistan. Dr. Nayyar began his presentation by discussing the alarming quantity of religious content discovered in English, Urdu and Social Studies textbooks across Pakistan, and cited the indirect inculcation of concepts of jihad and religious intolerance across schools as a growing and worrying trend. He added that the current state of the country’s curricula violated the constitutional safeguards given to non-Muslim students in Pakistan.

Speaking on the occasion, former Ambassador to the United States and Jinnah Institute Executive President Sherry Rehman observed that the alarming rise in religious content in Pakistan’s textbooks coincided with a growing disparity between public and private education. She said that growing intolerance posed a danger to the nation as a whole, and that the issue of curricula reform had to be addressed sensibly and with great maturity. She also added that such initiatives would face serious challenges once they were made into bills, and that efforts would have to be made to drive through the required legislation to ensure the safety and security of future generations.

During the course of the roundtable, JI Senior Fellow Raza Rumi pointed out that the 18th Amendment had afforded the provinces with a historic opportunity to touch upon education, but quickly added that reformists were under tremendous pressure not to institute changes where religion was concerned. He did, however, praise some positive developments including a growing middle class and increasing urbanization, both of which had prompted higher enrolment rates and a greater demand for education particularly in Punjab.

Mehnaz Aziz, CEO of Children’s Global Network Pakistan, meanwhile noted that the current curriculum initiative being launched was primarily a top-down effort, and in order to truly make a difference it was important to link the curriculum debate to the grassroots level. “It could be a much more empowering debate if we factor in the parents,” she said, adding that issues such as the treatment of history in textbooks needed urgent review. She added that in an age where market forces determined the dynamics and search for education, issues such as curricula reform became even more imperative.

The roundtable also elicited perspectives from specific provinces, with senior analyst Khadim Hussain noting that textbooks in Khyber-Pakhtunkhwa specifically contained and cited the viewpoints of religious and political leaders, and that history was being interpreted largely through a religious lens. Following from this, PTI leader Shafqat Mahmood pointed to the growing disparity incareer and higher education opportunities for students from English and Urdu medium backgrounds, and argued that the national premium on English was one of the many reasons why a common curriculum was badly needed. Dunya TV anchorperson Mohammad Malick, meanwhile, observed that the officials occupying positions on education boards across the country were rarely educationists, and that politicians without relevant experience all-too-frequently took decisions on matters relating to education.

Other participants also contributed to the debate on the state of curricula reform in the country. It was observed that parliamentarians and media persons in the country were products of a fixed mindset and hailed from the same education system, and went on to inadvertently shape public opinion. The role of powerful religious lobbyists in holding senior education experts hostage was raised as well. The feasibility of common learning objectives – as opposed to curriculum reform – was also discussed during the course of the roundtable. Other attendees also included Kashif Ch, gender specialist Naheed Aziz, Sehar Tariq, and journalists Taha Siddiqi, Mubashir Zaidi, Farman Ali and Tahir Imran Mian.