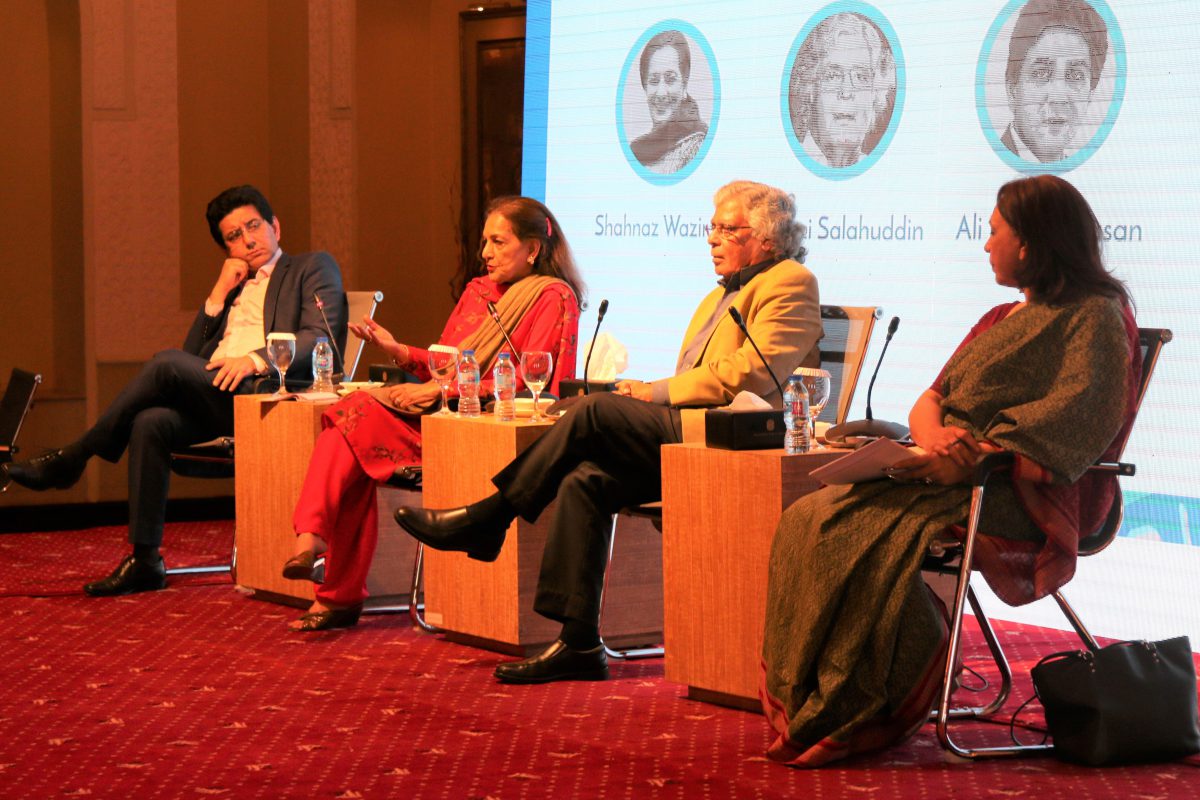 Jinnah Institute held an event in collaboration with DAI-Tabeer on 3rd March, 2020 titled ‘Inclusion and Democracy’. The event brought together diverse stakeholders to debate the quality of democracy, and ways in which democracy programming, institutional reform and policy implementation can be coordinated for the benefit of marginalized communities. The event was aimed at presenting gains made through DAI-Tabeer’s multi-year democracy strengthening process, which has brought about critical shifts on ground, in addition to assessing larger qualitative impacts on service delivery and inclusion of marginalized groups.

Delivering Inclusive Governance: Benefits for Whom?

Encouraging strides have been made in Pakistan’s democratic practices through initiatives aimed at increasing inclusiveness and remedying structures that have historically excluded minority groups from decision making processes. Assessing the milestones achieved by the DAI-Tabeer project, speakers asserted that the contribution of key institutions such as the Election Commission of Pakistan, NADRA and parliament must be acknowledged for their positive role in helping marginalized groups overcoming hurdles in political participation. Although the gains seem modest when seen against the backdrop of multi-dimensional exclusions experienced by women and other marginalized groups, speakers agreed that these policy course corrections were hard won achievements. The mobilization of over 300,000 women and socially excluded persons, and the registration of over 184,000 women’s CNICs were highlighted as significant gains of the process. Other initiatives such as the training of over 370,000 ECP officials and polling staff in improved election practices, and more than 150 political party officials on the Elections Act 2017 (prior to the 2018 elections) were also mentioned. The effectiveness of a gender and disability group constituted by the ECP was instrumental in increasing the voter turn-out and registration of women, transgender persons, and persons with disabilities.

Several shortfalls still remain, and speakers cautioned that development programming must be taken over by state authorities hereafter. It was noted that the voter registration gap between men and women is at least 12.5 million owing to cultural barriers and issues of mobility that hinder many women from obtaining CNICs, a prerequisite for voting. The NADRA Ordinance, 2000 shifted the onus onto citizens to register for their identity cards and hence, also to vote. This allowed NADRA to operate as a commercially viable institution, but speakers advised that the organization must be retooled and its strategic priorities redefined to reach out and facilitate citizens in registering as voters obtaining identity cards. Other speakers noted that exclusionary practices against women and minority groups are quite evident within political parties, especially during election cycles. Citing an example from the 2018 elections, speakers elaborated that several women candidates were allotted party tickets to contest the general elections, but only 16 of them won as they were made to run from heavily contested constituencies where even stronger male candidates could not have succeeded. Exclusionary mindsets towards women and minorities’ political participation need to change, and institutional interventions are one way of bringing that about.

It was agreed that Pakistan does not lack the capacity to bring about inclusion or democratic strengthening in its political system, given its strong bureaucratic practice and institutional procedures that can commendably carry out implementation of strategic objectives when needed. It is unfortunate that Pakistan lacks all commitment towards this end, as the state does perceive a benefit from programming inclusion or democratic values. Speakers noted that currently three of Pakistan’s major governance institutions, namely the bureaucracy, military, and judiciary, are run by officials who have permanent appointments. As they are not elected, they are neither obliged nor incentivised to be accountable to citizens. For democracy to flourish in Pakistan, it was agreed that institutions must run according to constitutional safeguards and principles, and new incentives should be offered to stakeholders who can bring about meaningful procedural reform. Speakers pointed out that this had been done successfully in other sectors like education and rule of law, where international donor support had helped turn around both policy and implementation processes with markedly improved outcomes.

In a conversation with human rights defender Ali Dayan Hasan, Senator Sherry Rehman discussed Pakistan’s major trends for the next decade, focusing on the climate crisis, the demographic boom, and food insecurity, amongst other governance and rights challenges. She pointed out that Pakistan will have absolute water scarcity by 2025, adding that the climate crisis will hit women and the poor disproportionately. At least 60 percent of Pakistanis suffer from food insecurity and if the dangerous nexus of poverty, climate stress, and the demographic boom is not addressed Pakistan will surely struggle to remedy the country’s destitution. Pakistan is witnessing the impacts of climate change everyday. Putting statistics on climate change in perspective, Senator Rehman revealed that from being the 7th most vulnerable country to climate change, Pakistan is now the 5th most vulnerable. More concerted efforts at an institutional level are the need of the hour, said Senator Rehman, lauding civil society organizations on mobilizing community support and creating awareness among citizens.

Countries face a serious crisis when their population and growth rate curves collide, a fate soon to befall Pakistan if its population growth of  2.4 percent is not contained. With the population boom and the food crisis coinciding, Pakistan is proving the Malthusian trap correct, observed Senator Rehman. Drought like conditions in Pakistan are likely to worsen till at least 2024, according to global advisories. Pakistan must look at countries in the region, particularly Bangladesh and take lessons on how the country has controlled its population. The Senator pointed out that Pakistan would have had at least 40 million less people in poverty today had its population growth rates resembled those of Bangladesh in the last three decades.

The need to improve human development outcomes through investments in young people was also noted. Pakistan’s youth demographic, one of the largest in the world, is considered to have immense promise and potential for providing the country with economic gains similar to those received by South Korea and other nations that had large youth populations. However, the Senator pointed out that Pakistan can only benefit from this demographic if it makes appropriate and timely investments in healthcare, education, training and employment. 4.5 million jobs need to be created in Pakistan over the next five years to ensure that Pakistan experiences a demographic dividend. This is a tall order and requires concerted efforts by all private and public institutions, she explained. Statistics reveal that currently less than 40 percent of the country’s youth is employed, out of which only 7 percent are women.

Senator Rehman noted that population, climate, and food security are very often dismissed as ‘NGO subjects’ that even legislators fail to question governments over, or bring up in parliament. These themes form the bedrock of governance in any democracy, especially ones that are transitioning through a crisis of governance. How far are the policy elite willing to go with changing their own water consumption habits? Or bring about behaviour change in their constituencies and communities of influence? She stated that the climate crisis highlighted Pakistan’s worst governance tendencies, whereby vulnerable population groups are daily suffering the impact of polluted environments and damaged ecosystems, and policy leaderships are withholding public data on water and air quality for fear it may be used for nefarious ends. The need of time is to generate informed public discourse, and utilize platforms where concerned stakeholders can help each overcome these challenges. The Climate Council was meant to perform this role but has not been established four years after the Climate Act was passed by parliament. She stated that generating anger and fear is not productive. Instead, bringing attention to critically important challenges is both a duty for governments, and right to information for citizens.

Pakistan has fared moderately well in increasing space for marginalized groups in its electoral process. Being eligible to vote through virtue of a CNIC should be the minimal benchmark of a functioning democracy that can provide many other benefits to its citizens. Panelists speaking in the final session of the day stated that democratic strengthening must realize outcomes such as health coverage, socio-economic opportunity, population welfare and social protection as indicators of a responsive political system. Being a voter is only meaningful if the system can provide egalitarian access to institutions, decision making and benefits.

Population, healthcare, and other socio-economic issues that have historically been relegated to the ‘development sector’ must be reclaimed by the state as these have significant repercussions on citizen well-being. Additionally, the panelists said that any initiatives aimed at increasing inclusion must constantly consider structural and systemic forces behind exclusion as the two issues go hand in hand. It was recognised that Pakistan’s institutions have always experienced an elite capture, with elections constantly throwing feudals and elites back into power. For initiatives to make significant gains in inclusion and democratic strengthening, it is important to realign governance priorities to consider the needs and voices of those at the lowest rungs of society.

Challenges like food insecurity and demographic stress constitute the most basic litmus test for democracy. With so many denied basic food, shelter and health services it is likely that mass non-cooperation and resistance movements will emerge. Citing statistics, panelists stated that currently 60 percent of Pakistan’s population lacks access to a nutritious diet. They added that Pakistan has one of the highest unemployment rates in the world, the largest gender wage gap, rapidly depleting water tables, and worsening food security. All these issues pertain to inclusion and human rights, and it is vital that initiatives aimed at democratic strengthening take these into account. What happens before and after the vote is of immense importance, said the panelists. Institutions need to be equipped with the expertise to remodel themselves and provide basic services to all persons, starting from those who are at the margins- that is the only way that the country can hope for a representative government and inclusive society.

Panelists pointed out that Pakistan’s institutions have been operating on exclusionary frameworks heavily influenced by a neo-liberal and patriarchal ethos, shutting out underprivileged groups. The panelists explained that there is an inherent hierarchy in agenda setting, resource allocation, and resolution of public issues corresponding with groups wielding power, influence and resources. When these relationships are questioned or scrutinized, their reaction is often brutal and violent. It was agreed that Pakistan must focus on making institutions more inclusive, increasing representation at all levels, and undertaking economic reforms that benefit the marginalized in better ways.