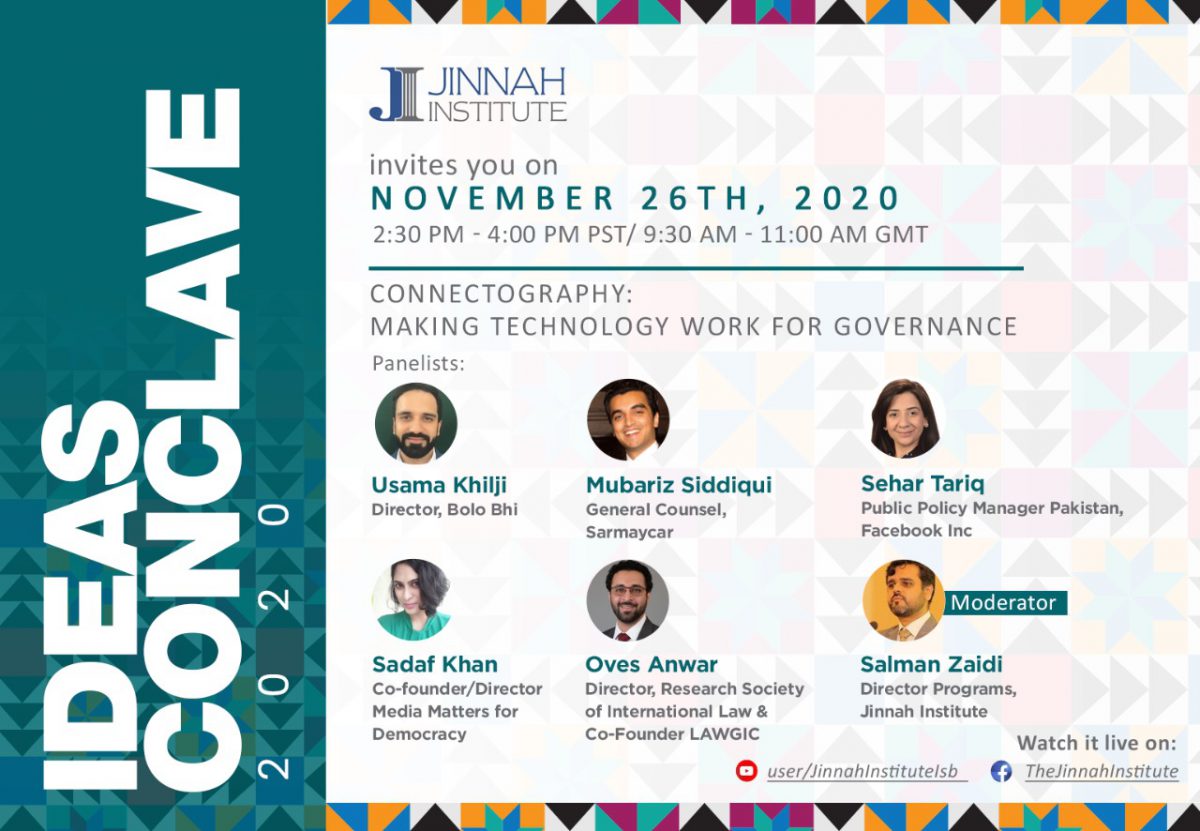 2020 was a year of “historic disruptions” which made it all the more important for states to rely on technology for efficient governance. “While we rebuild our way out of this pandemic, we technology will remain the instrumental resource that we use to shine a light on how we can rebuild, repair, reduce losses, reduce vulnerabilities, sustain our ecosystems,” stated Mr. Zaidi. Conversely, there was also a need to take a hard look at data as governments came to terms with how technology functions and how to control online behaviour and prepare a novel set of rules. Salman Zaidi went on to state, “we have also learned in this process that technology is no monolith. It is neither intrinsically good or bad. It’s what you make of it.”

One of the key points the session touched upon was the idea of “digital Pakistan” and progress the country had made on this front over the course of the last few years. Ms. Sehar Tariq argued that Pakistan was not as well-connected technologically as it was often perceived. According to the “Inclusive Internet Index” a report that assessed the rank of countries in internet readiness, affordability, connectivity the and availability of online resources, Pakistan was 76th out of 100. It was ranked “24th out of 26 Asian countries.” “When it comes to the numbers for Asia, we’re at the very bottom of the pyramid there,” stated Ms. Tariq. Even if the numbers pot forth by the state were to be relied on, 60-70 million people with access to the internet in a total population was a “large gap” of those not yet online.

Ms. Sehar Tariq continued, “Pakistan ranks poorly because of its infrastructure and network…(and) actually because we have one of the biggest gender gaps in the world. Women disproportionately do not have access to the Internet in Pakistan.” Beyond this, Ms. Tariq also highlighted the problem of digital literacy and its impact on digital divide in the country.

Discussing the impact of lockdowns on the use of technology for better governance, participants argued that if anything, the decision to close businesses, government offices and schools—even if temporarily—only further shed light on the growing chasm between the stated connectivity in Pakistan, versus the reality. This was particularly evident in the educational sector, where students from far-flung areas could not make the shift to online classes and were at risk of having lost out on acquiring important information. This dichotomy between regions in relation to internet access directly overlapped with the provision of rights and freedoms as well, because a lot of these liberties, such as the rights to information and education and the freedoms of speech and association were often directly connected to the internet in this day and age.

In response to this, the government could potentially resolve some core issues of access by steps such as “installing public Wi-Fi hotspots in public areas where Internet is available for free for people,” explained Usama Khilji. But beyond these “stop-gaps”, the government needed “to increase access and infrastructure and there’s existing mechanisms available for that,” said Mr. Khilji.

Mr. Oves Anwar offered his expertise from the legal sector to assess how technology could be included in the judicial process. He stated, “When we’re looking at governance through the rule of law lens, we’re looking at issues of accountability. We’re looking at issues of inclusiveness and how the judiciary plays a role in how the justice sector really functions.” Endemic issues in Pakistan’s justice system, such as “delays or lack of credibility in criminal investigations” or the capacity of prosecutors, investigations or even judges had solutions that were “very viable, very workable.” Not using technology at all levels of the judicial system had “really impacted the experience that litigants, common people who have to interface with the judiciary are suffering from,” said Mr. Anwar.

Mr. Mubariz Siddqui agreed with the comments of other panellists and added that there was a need for governance models to try and include technology for the improvement of service delivery. He cited the example of the current government’s ongoing accountability drive, and highlighted that it was imperative that technology was used to assess discretionary powers and keep a check on them. Transparency in the procurement process and the disbursal of funds could go a long way in the government achieving its goal to clampdown on corruption. “When everything is on paper, it’s very easy to forge records. It’s very easy to procure items worth crores without anyone noticing.”

Ms. Sadaf Khan elaborated on the regulatory mechanisms currently in play in Pakistan’s internet landscape, and argued that the main objective of the state “was very limited”. She elaborated, “The view for technology that’s being taken is to simply create an environment which is more conducive to certain narratives… when you start thinking about the political boundaries that exist, the political red lines that exist, and then start using those to define where technology should go and who should connect and who should not, then your whole worldview regarding technology becomes limited to one particular aspect of technological use.”

On the issue of banning mobile applications and platforms such as YouTube and TikTok, participants asked the stakeholders to consider this problem from both the economic and socio-political angles. Both were adversely affected by the discussion to blanket ban a platform that had a large number of domestic users.

“The development sector cannot do much unless the public stands behind them. There is a need to have a discourse on how human rights and civil liberties are not opposed to patriotism or the progress of Pakistan,” stated Ms. Khan.