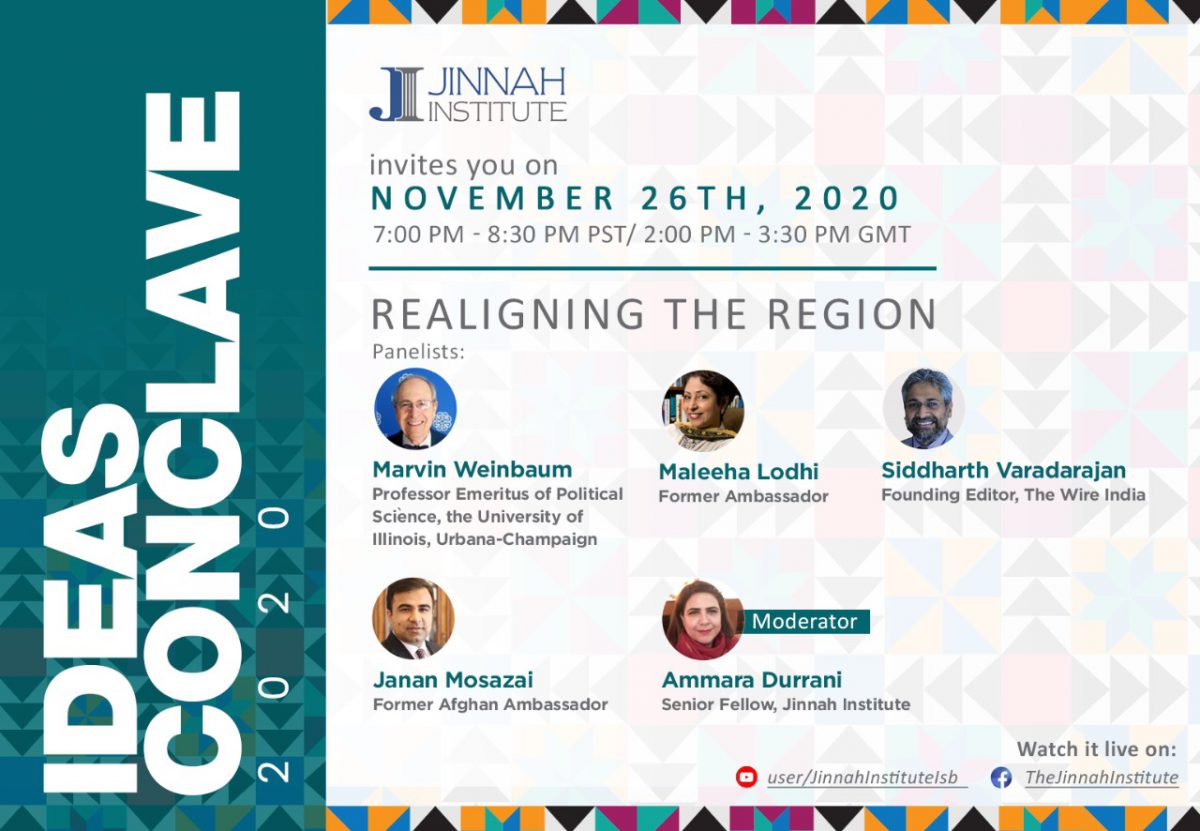 The final session of the second day of Ideas Conclave 2020 witnessed an important bilateral engagement. ‘Realigning the Region’ moderated by Senior Fellow Jinnah Institute Ammara Durrani, included participants Ambassador Maleeha Lodhi, former Afghan Ambassador Janan Mosazai, Professor Marvin Weinbaum and Editor, The Wire (India) Siddharth Varadarajan and saw the debate on the Afghanistan question take new trajectories to discuss the challenges still present in finding a resolution to the lingering conflict. The conversation began with an analysis on Pakistan’s shifting geo-political focus as a result of events close to home. The rising powers of China and India, alongside the US’ potential exit from a long and drawn-out conflict in Afghanistan necessitated a discussion on what shape the region would take moving forward.

At the outset, it was important to lay out Afghanistan’s internal context and where the public stood in reference to the negotiations process. The participants agreed that the “unbearable and untenable” violence demanded an immediate ceasefire and complete cessation of hostilities on Afghan soil, which was also the number one priority of its neighbours. The consequences of a proxy war—brought about by hasty withdrawal of US troops without talks coming to a successful conclusion in Afghanistan—would be “horrendous for the people of Afghanistan”.

The panellists also looked to assess the current Pakistan government’s positive engagement with its counterpart in Kabul and explain Islamabad’s stance on the peace process taking place. Pakistan’s commitment to peace and stability was indicated with Prime Minister Imran Khan’s recent visit to Kabul. But ultimately, as the talks in Doha got underway, it was up to the Afghans themselves to find a peaceful resolution to the conflict.

Panellists took a close look at India’s role in Afghanistan since 9/11. It was clear that India had rather deep reservations about the prospects for dialogue with the Taliban and the prospects for that kind of negotiated solution, especially if it came along with an “artificially hastened timeline” for the withdrawal of US forces.

When the discussion moved towards regional stakes in the peace process, Pakistan’s reservations on Pak-Afghan transit trade and New Delhi’s ambitions in Afghanistan, India’s actions in Indian Illegally Occupied Kashmir and the “crisis” that had erupted in South Asia as a result took centrestage. Ultimately, all other minor issues would take a backseat until there was resolution on Kashmir and its future.