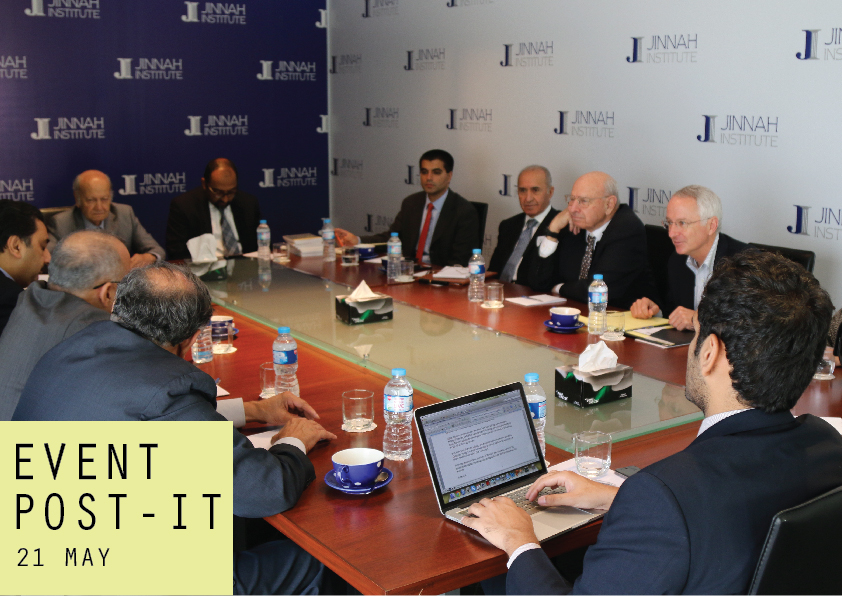 Roundtable held with The Century Foundation’s International Working Group on Pakistan
On May 21,the Jinnah Institute held a roundtable on ‘Reform in Governance: Leveraging Pakistan’s Potential’ to discuss recommendations put forward by TCF’s International Working Group on Pakistan in their report titled ‘Jago Pakistan’, launched in Islamabad and Washington DC. Senior experts participating in the discussion at Jinnah Institute commented on different aspects of the report, which span key regional security challenges, violent extremism, internal governance reform, South Asian integration and political transitions within Pakistan. The report comes after two years of deliberations between American, Pakistani and other international experts, who were present at the roundtable discussion.

They felt Pakistan’s policymakers must prioritise internal governance to surmount geopolitical challenges in the region, and address core issues related to public financing, institution building and social service delivery.Public institutions were necessary for systemic durability, but it was just as critical to create public interest in democratic continual, which was lacking due to leadership deficits and overall governance failure. Participants likened this to a prolonged “tragedy”, wherein changing decision makers committed the same mistakes over time that led to wastage of precious human resource.

While recently released statistics on the economy were encouraging, participants commented on the vast informal sectorthat was both supplementing and undermining the formal economy. Participants spoke about the need to graduate beyond heavy dependence on assistance and adopt economic approaches that enable prosperity rather than survival.
It was pointed out by some participants that the 18th Amendment had devolved key sectors to the provinces, and recommendations related to security, economic management, energy, education and agriculture fell squarely within provincial purviews. They also commented on a certain level of executive paralysis that exists in the public sector, explained by one participant as an indicator of judicial monitoring over civil servants’ decisions. This heightened level of monitoring – with dozens of civil servants charged for corruption by the courts – had caused bureaucrats to avoid decision-making. This was debated by participants, who felt that auditing the performance of civil servants was crucial. It was agreed that civil service reform was thoroughly needed, particularly within an overburdened judiciary.

In the context of changing geopolitical conditions, participants agreed that Pakistan has an essential role to play, and that the support of the international community would be of vital importance in the coming years. Two major changes characterise the region: the rise of China as an invested stakeholder, and internal transitions within Pakistan. Ensuing chaos in the Middle East should serve as a reminder to Pakistan of the fragility of states, and prompt concentrated appraisal and introspection. Participants observed that the Arab Spring showed how heavy a toll reform failure can take, and that none of the countries are better off now compared to before 2010 when the upsurge took place, except perhaps Tunisia where the violence began. It was stated that ISIS had taken root and made inroads where no effective governance existed in the Middle East; the present worry was the newly taken city of Ramadi in Anbar province by the militant group.

Participants spoke about the impasse Pakistan has reached with India, and how New Delhi’s political thinking will shape Prime Minister Modi’s policy towards Pakistan. They expressed the hope that Modi will be able to lead India’s foreign policy, notwithstanding the demands of political survival at home, rather than be led by its compulsions. They agreed that reopening dialogue was necessary and concerned governments were quietly advising that this be undertaken soon. In addition, they stated that it was possible to find new ways of approaching intractable issues; the resolution of Kashmir may not require a solution to Sir Creek first. It was pointed out that nuclear CBMs marked a successful domain within Indo-Pak relations, and had remained unaffected by broader tensions in the bilateral relationship.

While the US was in the process of withdrawing from Afghanistan, it was seen that policymakers in Washington had tempered the pace of withdrawal so that an unplanned drawdown may not bring about electoral backlash at home, nor trigger alarm and chaos in Kabul.