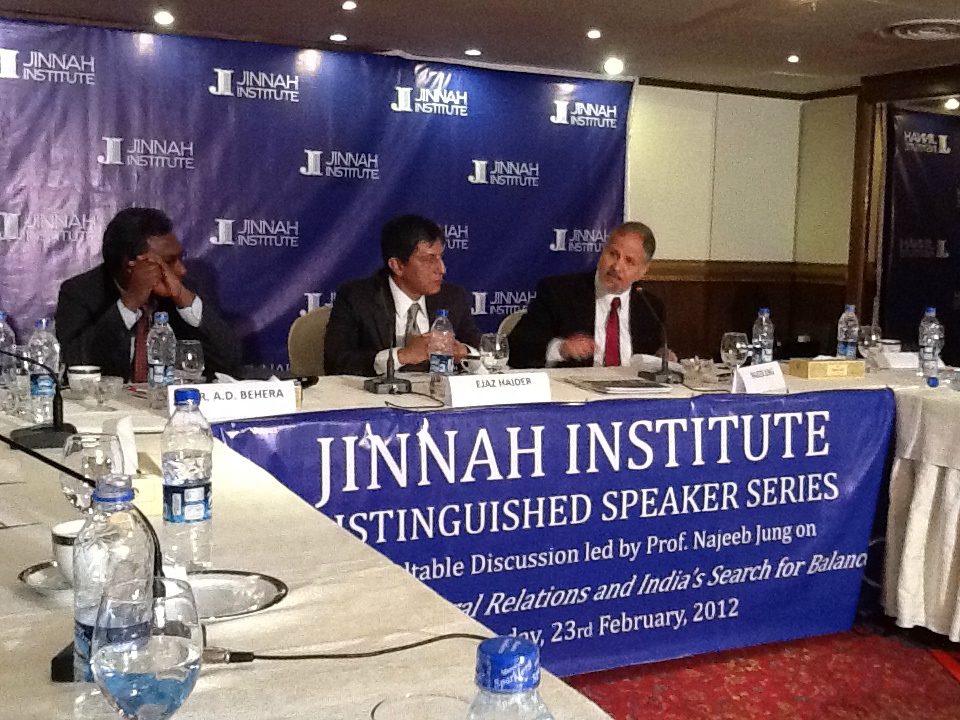 “Most of India wants peace with Pakistan”: Professor Najeeb Jung

Islamabad February 23, 2012: “A shared future of prosperity lies ahead of us in Indo-Pak relations” stated Professor Najeeb Jung, Vice Chancellor Jamia Millia Islamia Delhi and a former IAS officer,  at the Islamabad Marriot on Thursday. Prof. Jung was speaking at the round-table panel discussion titled, ‘Indo-Pak Bilateral Relations and India’s Search for Balance’, organized by the Jinnah Institute. “Despite a checkered past, India’s future is linked to Pakistan’s future and most of India wants peace with Pakistan,” he emphasized in his lecture before a group of policy experts, adding that there is a pressing need for a more extensive exchange of students, academics, journalists and civil servants between the two countries. Prof. Jung spoke about the status of religious minorities in India , particularly the Indian Muslims  and explained that his country’s economic growth had not compromised democratic pluralism.

Mr. Jung has been invited as part of Jinnah Institute’s Distinguished Speaker Series, an Indo-Pak Track-II initiative. Also speaking at the event was Dr. Ajay Behera, Coordinator for Pakistan Studies Program at Jamia Millia Islamia, who talked about taking practical steps that bring people from both countries closer. He lamented that existing MoUs between Indian and Pakistan universities that were non-functional and pointed out the limitations within which peace constituencies could work in both countries. He acknowledged that both India and Pakistan have a youth dividend to capitalize on, and that the future economies of both countries depend on this constituency.

Ejaz Haider, Executive Director Jinnah Institute acknowledged that there is a dearth of Indian experts on Pakistan, or of Pakistani experts on India. Mr. Haider appreciated how the distinguished speakers helped bridge this asymmetry of understanding, and felt that peace movements in India and Pakistan were unable to rise vertically and challenge the policies of their respective states. “It is the two states who have to decide the future course of our bilateral relationship”, Mr. Haider said, “and it has been seen that when the states pull back, the peace process falls apart”.

During the question and answer session, participants of the round-table posed queries regarding water, terrorism, and climate change, among other issues that impact bilateral relations. Questions regarding the Gujral doctrine, sub-regionalization in the Indian subcontinent, and India’s relations with the U.S. and China also came under discussion. Prof. Jung dealt with the local, bilateral, and global aspects of the questions posed in the interactive session, and offered suggestions and solutions from his own experience as an Indian Muslim, a former bureaucrat, and an academic policymaker.

Jinnah Institute is an Islamabad-based public policy think-tank that leads two institutionalized Track II processes between India and Pakistan. JI has partnered with the Australia India Institute (AII) for Distinguished Speaker Series and plans multiple interactions between policy experts and audiences on both sides of the border. Prof. Jung is the third speaker of the Jinnah Institute’s Distinguished Speaker Series, which has hosted Dr. Shashi Tharoor (Member of Lok Sabha and former Indian Minister of State for External Affairs) and Mr. Mani Shankar Aiyar (Member Rajya Sabha and former Union Minister for Petroleum, Panchayati Raj and Youth) in the past. It was founded by Sherry Rehman, now Pakistan’s ambassador to the US.