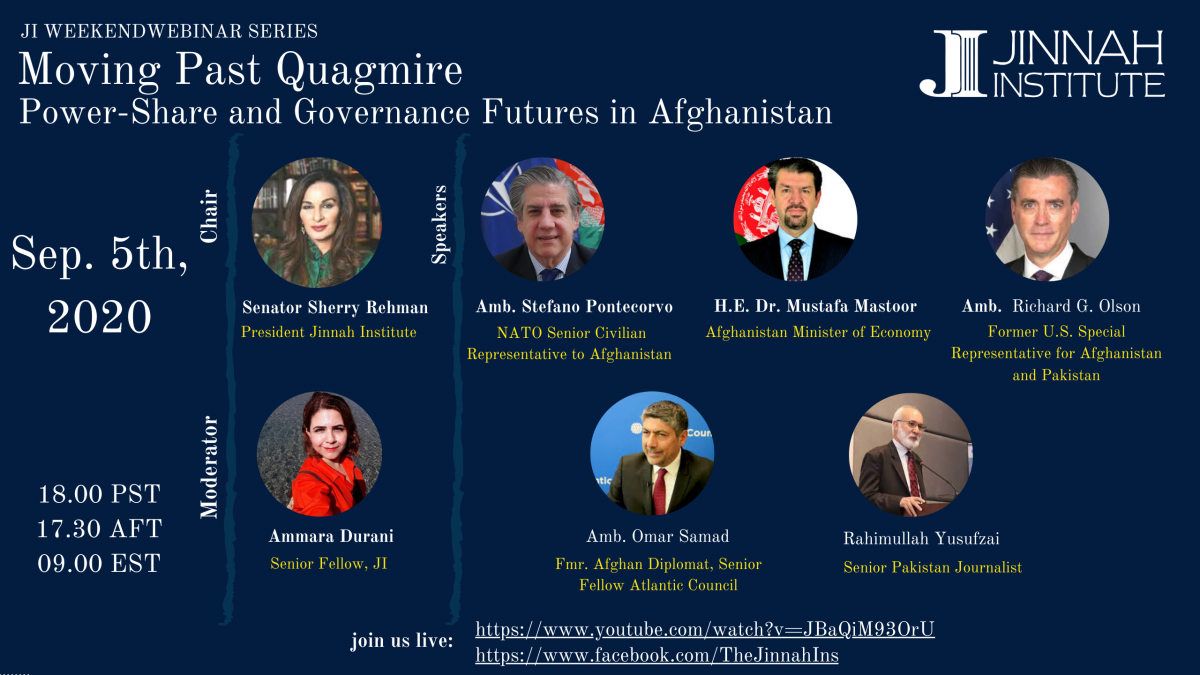 Moving Past Quagmire: Power-Share and Governance Futures in Afghanistan

“How long will the US commit its time and resources to this peace process, and what sustainability will there be to its engagement in Afghanistan?,” asked Senator Sherry Rehman, at Jinnah Institute’s policy roundtable webinar titled, ‘Moving Past Quagmire: Power-Share and Governance Futures in Afghanistan’ on September 5, 2020. The February deal between the Taliban and the US is undoubtedly a milestone agreement, and it has been met with great relief from many quarters. The commencement of the intra-Afghan dialogue is a historic occasion; however, the timing and commitment to progress will be crucial in this process as the balance of power on either side may shift, impacting the dynamic of the talks. Additionally, Senator Rehman raised concerns about a possible hasty exit on part of the US and how that could adversely impact the inclusivity  of the political bargain which will define the peace process.

Public enthusiasm for the war in Afghanistan has waned in the US domestic sphere. Former US Special Representative for Afghanistan and Pakistan Ambassador Richard G. Olson explained that counter-terrorism is no longer the organizing theme in US foreign policy; that has now been superseded by great power competition, primarily with regards to China and Russia. “There is no doubt that the US is looking to exit from Afghanistan. However, the key question is whether it will be a clean or dirty exit?” If a new administration comes in following the US general elections, it will then face the challenge of evaluating whether the conditions of the Doha Agreement have been met in order to proceed with the complete withdrawal of US forces from Afghanistan. Ambassador Olson further added that the debate in the US has primarily revolved around troop levels, and that is perhaps an unfortunate way to cast the question since it parallels very much the Taliban’s approach to US presence in Afghanistan. The crucial question would be regarding the level of US engagement in terms of assistance, and not the number of troops on the ground.

During the first round of peace talks in Doha, the two sides are expected to discuss the framework of the negotiations going forward. According to Afghanistan’s Minster of Economy Dr. Mustafa Mastoor, discussing a possible ceasefire will be a top priority for the Afghan government. Kabul has voiced legitimate concerns about the Taliban’s ability to enforce a comprehensive ceasefire over the territory it controls, since its commanders are trained to be autonomous. Mr. Mastoor further added that there is uncertainty regarding what issues the Taliban will table during the talks since Kabul has not been in direct contact with the group’s leadership thus far.

The negotiation process will not be an easy one, and the degree of compromise from both the parties will define the success or failure of these negotiations. The common denominator must be the search for a “dignified” peace for all the Afghan people, and both the sides need to exhibit flexibility and good faith, stated NATO Senior Civilian Representative to Afghanistan and former Italian Ambassador to Pakistan Ambassador Stefano Pontecorvo. Popular support is required for a durable outcome, and peace can only be lasting if it safeguards the gains of the last 19 years that the Afghans have worked so hard for under the security umbrella that NATO has provided. These gains made with the help of the international community have taken the form of high life expectancy, lower child mortality, more children in school including girls, freedom of expression, and significant participation of women in the public sphere. Ambassador Pontecorvo further added that, “NATO has a vested interest in sustaining the Afghan National Defense and Security Forces. These institutions exemplify the unity of the Afghan nation, and will continue to be a crucial pillar for Afghanistan’s long-term stability, security, and sovereignty.” He also revealed that NATO had been invited by President Ghani to observe the intra-Afghan negotiations, but stressed that NATO is cognizant that this is an Afghan-led process, and its involvement in the process will be contingent on the situation on the ground and if it can have a meaningful impact on the process.

The intra-Afghan dialogue marks a new chapter in the Afghan conflict; the outcome is uncertain still because the dialogue is punctuatued by a number of “unknowns”. While the endgame is clearly looming, there is little anyone knows about how long or difficult this process will be, stated Former Afghan Diplomat and Senior Fellow Atlantic Council Ambassador Omar Samad. The first meeting will primarily consist of formalities and photo-ops. “For the US, there is a desire to send the message that the talks are moving along with the US general elections approaching soon.” He added that Kabul wants to project itself as representing and defending a certain set of values which sum up the popular will of the Afghan people; whereas the Taliban, emboldened by the Doha Agreement, would be coming to the table with the mindset that it is an entity that cannot be ignored considering the control it holds over its territories.

Concerns were also raised regarding the Afghan government’s ability to present a united front during the talks in light of recent disagreements between President Ghani and Dr. Abdullah Abdullah. “It will come down to whether there is sufficient political will to achieve durable peace”, stated Ambassador Omar Samad. Chiming in, Ambassador Olson explained that polling data in Afghanistan reveals that the republic system of governance has more public support compared to the Taliban, and that the idea of voting for a government is preferred by the Afghan people. What is important is not so much the negotiating team, but the Reconciliation Council back in Kabul. “If the Council can come together and overcome its differences, then there is hope for a strong deal.”

While there was consensus on the fact that a reduction in violence was necessary to instill confidence in the peace process, several panelists expressed a clear degree of skepticism about the possibility of a comprehensive ceasefire. Senior Pakistani journalist Rahimullah Yusufzai reiterated that a comprehensive ceasefire has been an old demand of the Afghan government, but that it was unlikely that the Taliban would agree to one at this point. “It is possible that Taliban later agree to a reduction in violence, as they did a week prior to signing the peace agreement with the US in Doha earlier this year. There could be a reduction of violence in installments as well, but that depends on a variety of factors.” Mr. Yusufzai further added that working towards a comprehensive ceasefire is expected to be a long process which will require a lot of trust building among the two negotiating parties.

Speculation over a possible ceasefire also raised the question of whether the Taliban leadership is capable of enforcing one, and if it can eventually transition into a political force. Regarding the former, Mr. Yusufzai noted that 65 percent of the Taliban negotiating team members are part of the Rahbari Shura (Leadership Council), which means that the members participating in the talks are sufficiently empowered to provide such guarantees. Transitioning into a political force will however be a significant challenge for the Taliban since fighting as a tactic has proven to be incredibly successful for them. “Since 1994, the Taliban have been operating as fighting force, and the group’s political wing has always been undermined and superseded by the military wing.” He explained that the Taliban’s stance on democratic norms such as voting continues to evolve. Eventually, the Taliban will have to decide if they want to become a democratic power-holder in this arrangement, and if they are willing to accommodate concerns regarding human rights and women rights.

The role of regional actors was also discussed in light of reports about certain hardline Taliban commanders – who oppose the peace talks – having close links with Iran. Ambassador Olson stated that such reports should not come as a surprise as regional actors maintain such ties to guard their own interests. While the state of bilateral relations between the US and Iran makes it difficult to have any meaningful engagement on the issue of Afghanistan, it is important to remember that the two countries do not have divergent interests on the matter. He further added that there is need to “convene a regional dynamic that can draw in Iran as well.”

President of Jinnah Institute, Senator Sherry Rehman, concluded by saying that while there are concerns about the fact that violence continues to escalate in Afghanistan, all stakeholders are clear that there is no substitute for a negotiated peace on the ground. She added that Pakistan is a key stakeholder in regional stability, which is impossible without a peaceful Afghanistan. However, if conditions deteriorate, and Kabul is unable to exercise control over its territory following a reduction in US security commitments to Afghanistan, Pakistan will not be in a position to guarantee peace; the responsibility for that outcome, as well as the preservation of gains lie within Afghan terrain and its leadership. Pakistan will do everything it can to support an inclusive and broad-based peace process, but would like to see enhanced international engagement on issues like the reduction of the narcotics war economy as well as violent power-struggles that spill over into Pakistan. She hoped that more Afghan women would be meaningfully mainstreamed in the negotiations, and that Pakistan’s concerns about the growth of terrorist redoubts housing TTP and Daesh will be addressed by the international community.

“We have paid a very high price in combating terrorism in extremely challenging conditions for a decade, and have been successful to a great extent, but history has taught us to watch out for conflicts that spill over, and this time we don’t want our sacrifices against terrorists to become yet another footnote to history. The United States has crafted so far a withdrawal agreement with the Taliban, not a peace agreement with Afghanistan. We look to a better future for our war-ravaged neighbouring state, and hope that both the Afghan leadership and the international community have a long-term commitment to staying engaged in the path to a sustainable peace in Afghanistan.”

Follow the link to watch a recording of the full webinar here: