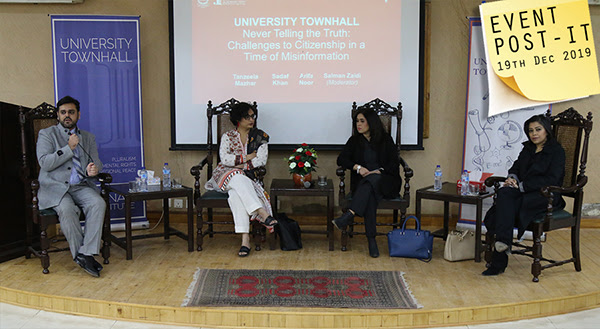 Never Telling the Truth: Challenges to Citizenship in a Time of Misinformation

“The flipside of media credibility is that news organizations must be able to make money, as they are business ventures before all else,” stated journalist and anchor, Arifa Noor at Jinnah Institute’s University townhall on the theme Challenges to Citizenship in a Time of Misinformation. The media industry has structural constraints that make it excessively dependent on government advertising revenue to keep it going. Across the world newspapers have found it challenging to stay afloat, as there is shrinking offline subscription, and advertisement revenue is generated for online versions only. This impacts salaries, time devoted to fact-checking, and editorial quality, she stated. “As mediapersons, we also harbor biases that are reflected in the composition of headlines, in space devoted to news items, in what is published on the front page. We struggle with this ofcourse, and it is a choice to work with organizations where editorials are not dictated,” she said.

For many decades, print and electronic media have maintained a monopoly over information, but the advent of new information technologies such as the internet have altered this. Social media breaks the news instantly, and its users consume both misinformation and disinformation in equal measure, explained Sadaf Khan, co-founder of Media Matters for Democracy. She cited an incident from the 2018 general elections, whereby a viral Whatsapp message misguided voters on how to mark their ballot papers, rendering them invalid if the instructions were followed. Media literacy amongst Pakistanis is deficient, particularly among older age groups who are more susceptible to disinformation. She stated that Pakistan’s information ecosystem has evolved in ways that information can easily lend itself to conflict; it turns into an instrument of control or weapon of war. Sadaf stated that journalists working honest jobs are forced to prove their credibility and loyalty whereas a tiny minority of anchor persons become the face of media in Pakistan. Journalists operate under industrial pressures that are never considered by outsiders demanding credibility. “It is not the job of journalists to formulate solutions to problems, that demand must be raised with the policymakers,” she said.

Mediaperson and social activist, Tanzeela Mazhar, stated that social media has enabled young people to engage in political discourse but their bolstered numbers should not be taken to mean an informed participation. Critical thinking is not taught in most schools, and the State’s many narratives over time have compounded ideological confusion among the electorate. It is without surprise that we lurch from one political experiment to the next. She explained that the State is a composite of its institutions, its people and laws that govern their interaction, but unfortunately this idea needs to be rehashed every few years with greater emphasis, because the State has been diminished to the handiwork of a few groups. No state is so weak that it cannot withstand criticism, neither should progressive criticism be interpreted as anti-state activity. “Patriotism is not a box to trap people in. How is it that citizens immediately turn into anti-state elements if they place one foot outside the box?” she asked. Tanzeela advised the participants of the townhall that their greatest advantage was their education, which gives them the ability to verify news from disinformation.