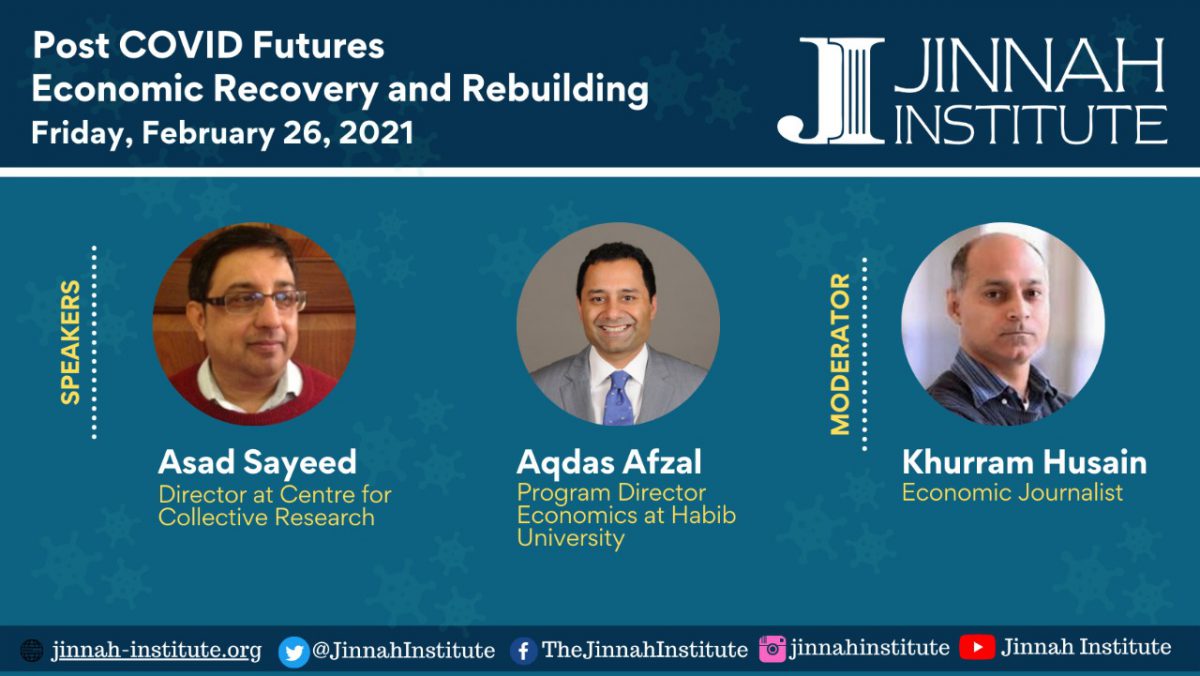 The Jinnah Institute is compiling a research report on Post-COVID futures which evaluates the economic response to the ongoing pandemic, what the prospects are of an economic recovery, and whether the recovery will be a robust one considering Pakistan’s structural constraints. In anticipation of the launch of this report, JI brought together the authors of the report to discuss their findings and recommendations.

Prior to the onset of the pandemic in March 2020, the Pakistani economy was not faring that well as it was in the throes of an economic adjustment program. Dr. Asad Sayeed explained that for the last decade and a half, the economy has lived through a boom-bust cycle on a macroeconomic level. Even before COVID, growth was down, so was investment, inflation levels were rising, and tax revenue collection was at a historic low. It is important to underline that this has been a recurring pattern for our economy. Dr. Sayeed noted that there were several structural factors that had not been addressed for the past decades because of which Pakistan was ill-prepared for the kind of lockdown that was mandated by the global pandemic.

Some of the recent economic indicators have been positive when considering the current account surplus and the improvement in high frequency indicators according to the State Bank of Pakistan. Despite this, Mr. Aqdas Afzal expressed skepticism regarding the prospects of a robust recovery. The primary reason for this is the general type of economic planning and thinking that has been adopted by the current government. The focus of the government has been on fiscal consolidation as a result of the IMF programme. He added that the focus on budget balancing has been misplaced considering Pakistan’s current context. Unlike other countries, Pakistan has shied away from employing fiscal policy measures to alleviate the crisis. The only measures we have witnessed thus far have come from the State Bank in the shape of injecting liquidity in the market; however the impact has not been as desired.

On the subject of whether it is possible to separate the impact of COVID on the economy from the longstanding structural bottlenecks that have plagued the economy, Dr. Sayeed pointed out that the economy was slowing down even prior to the pandemic. The core problem is that Pakistan lacks levers for growth. One of the structural issues we face is the inability to incrementally formalize the economy and broaden our tax net. This leaves the government with limited avenues for achieving sustainable growth. He further added that Pakistan has struggled with allocating resources to productive sectors over the years; and to our dismay this is still not on the government’s radar.

In light of these vulnerabilities, how much room does the government have to craft a policy for economic recovery? Mr. Afzal argued that as long as real incomes do not go up, subsidies are not going to bring about an economic revival. He lamented that the focus has been on going down the same failed avenues of hand-outs and relief packages. Moreover, when it comes to hard constraints, governments can borrow funds in their own currencies and repay the loans, however the real solution lies in questioning the allocation of resources and having a discussion within the confines of the political economy to determine who is going to get what.

The NCOC recently announced the withdrawal of COVID mitigation measures; moving forward, it remains to be seen what sort of political economy takes shape and how the government responds with regards to the economy. Mr. Afzal raised the pertinent question of how the State Bank will afford the incentives it offered through lower interest rates and subsidies. As it is, the government is under increasing pressure from the opposition and cannot afford any further economic deterioration. Therefore, it is likely that the government will try to maintain whatever minimum level of performance it can muster. He further lamented the fact that the private sector did not pick up the slack post-liberalisation. Going forward, with the structural bottlenecks firmly in place, it seems that the government’s focus will remain on the budget deficit while keeping the economy constrained.