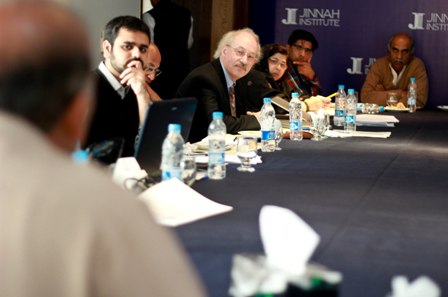 SLAMABAD. March 4, 2013 – The media, civil society, NGOs and policymakers must demand the implementation of citizens’ constitutional right to information. This was the opinion of participants at a dialogue – “Right to Information: Applying Global Lessons to Pakistan” – organised by the Jinnah Institute on Monday.

Participants, including politicians, social scientists, researchers, civil society activists and journalists, agreed that if implemented correctly, Right to Information (RTI) laws can empower the public to monitor the government and both public and private organisations, and also promote a culture of accountability.

Toby Mendel, an expert on Freedom of Information legislation and the keynote speaker at the event, said that there have been very few instances of civil society demanding the right to information from the government in Pakistan. He attributed the weak demand to underdeveloped RTI laws, lack of public awareness, and insufficient media coverage of the issue. Mendel has worked extensively with NGOs and governments on this issue in Asia, Africa, Europe, the Middle East and Latin America.

Former information minister Anisa Zeb highlighted the importance of education in raising awareness in civil society to understand and demand their right to information. TV anchor and columnist Farrukh Pitafi added that implementing RTI was vital to creating a culture of accountability.

Pakistan’s National Assembly in October 2011 which has still not become a law. Under the draft bill, civil society members could request access to documents issued by public bodies.  Furthermore, public bodies could not block a user’s request to information, ensuring transparency and accountability in various government departments. The bill is still with a Standing Committee of the National Assembly for further discussion.

Mukhtar Ahmed from the Citizens Voice Project highlighted a major problem concerning the supply side of RTI. Citing his own experience, he pointed out that government officials deny this right primarily because they feel insecure divulging information to the public for fear of being punished by their leadership.

Raza Rumi, Director of the Jinnah Institute, said that the route to realisation of the right to information was provincial legislation followed by the establishment of local government institutions. The ultimate goal of this right is to promote the welfare of citizens so that they can demand critical information which affects their daily lives such as public service delivery.