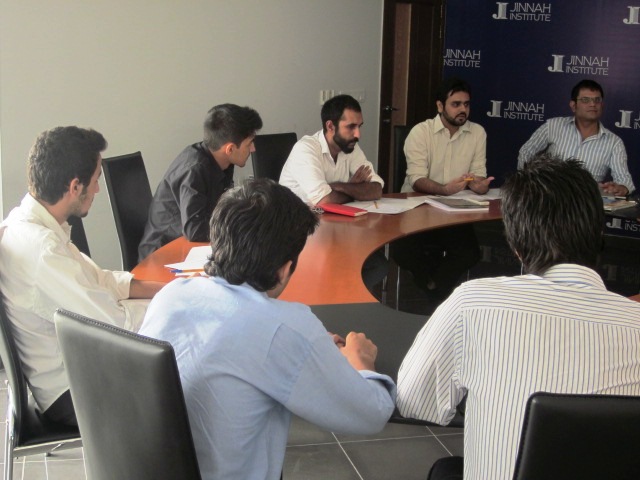 Islamabad, August 2, 2012: Young Pakistanis can be seen taking an active interest in electoral politics and given Pakistan’s growing youth cohort in the national populations; Pakistani youth will play a decisive role in shaping the politics of the country in the years to come.  Young intellectuals, activists and professionals are often under-represented in the policy discourse. In order to correct this imbalance, Jinnah Institute has embarked on a project to regularly solicit the views of young Pakistanis from various walks of life in order to develop a deeper understanding of the drivers of youth politics, ideologies and aspirations as they will shape the future political and developmental narratives in Pakistan.

The upcoming elections in Pakistan have provided us with a window of opportunity to inquire about what drives the political thought process and decision making patterns of young Pakistanis. Given that the youth can decisively influence the outcome of the upcoming elections, it is important to seek and understand their view.  In the pursuit of these views, Jinnah Institute organized a roundtable that brought together a small group of young Pakistanis to solicit their views on the upcoming democratic transition.

“Out of 84 million registered voters, almost half are below the age of 35”

There was consensus amongst participants that the Pakistani youth today are more informed about and engaged in political debates today due to the media and social media in particular. However, views were divided on if this interest would translate into actual participation in politics or even votes on Election Day.

Several participants agreed that the primary cause for young people not casting their vote was the belief that their votes do not translate into actual change or make a difference to the system of governance.  Young people representing urban areas also noted that there is a dearth of information on voting procedures among urban youth and this factor might contribute to low voter turnout amongst urban youth.

It was also noted that in the upcoming elections, we might see an uptick in the number of young male voters but young female voters would lag behind in representation at the polls. Participants agreed that issues of gender based discrimination continue to plague the cu

rrent generation and young women, particularly in rural areas, will remain at a distinct disadvantage in the political and electoral process.

Representatives from rural constituencies in Punjab, Balochistan and KPK held that traditional allegiances and biradri/tribal affiliations will continue to play a decisive role in the voting patterns of rural youth. Young people from rural areas were off the view that issues of service delivery, local infrastructure and employment at the district level have and will continue to majorly influence their voting preferences. The urban youth were more concerned about national and ideological narratives including foreign policy issues such as drone strikes and macro-level corruption.

The young professionals and students also highlighted the challenges of converting political consciousness into active electoral participation and the fact that there were serious doubts about the efficacy parliamentary democracy as a suitable system to govern Pakistan. A few participants even went to the extent of supporting a presidential system as a more suitable form of government.

Overall, there was a consensus that the political parties except a few, had deficient mechanisms to engage with youth and involve them in party politics as well as policy making at all levels.  Raza Rumi, Director Policy and Programs at Jinnah Institute concluded by stating that Pakistan’s democratic evolution had entered into a new phase due to the demographic transformation  and there was a dire need for political parties, federal and provincial governments as well as civil society to work towards a more meaningful engagement strategy with young men and women in Pakistan.