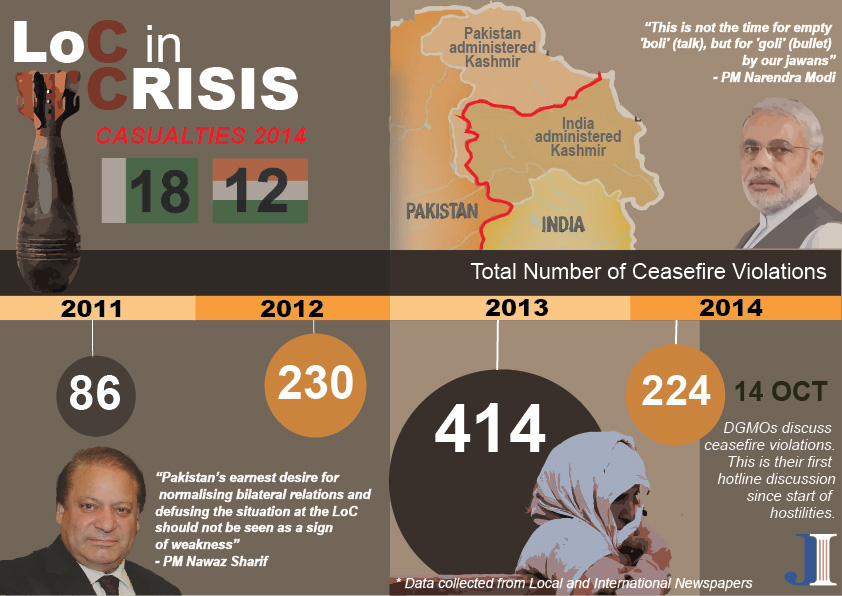 *The figures quoted above have been collected from local and international newspapers. The number of ceasefire violations may vary across sources.

Why is this time different?

The resumption of hostilities has displaced an estimated 30,000 villagers, who have fled their border homes in anticipation of further violence. This year 42 violations have taken place on the Working Boundary, unprecedented given that this boundary is not disputed and is marked by densely populated settlements on the Pakistani side. With a population of almost 2 million in Sialkot district alone, the risk of Pakistani civilian collateral damage in the event of such violations is significantly greater. It is also worth mentioning that, unlike previous escalations, this time it is civilian casualties on either side that have been taking the biggest hit.

The exact cause of the deadly exchanges has still not been determined. According to independent news sources, the confrontation was triggered by the explosion of an IED in the first week of October in the Balnoi sector in the Poonch district of Occupied Kashmir, claiming the life of an Indian soldier.

The most immediate provocation seems to have been Prime Minister Nawaz Sharif’s recent attempts to internationalize the Kashmir issue at the September UNGA session. The uptick in violence and climb by both India and Pakistan up the escalation ladder sequentially follows from India’s unilateral rupturing of ties after the Pakistani High Commissioner’s meeting with Hurriyat leaders in August. This prompted Foreign Secretary Sujata Singh to cancel her scheduled meeting with Pakistan Foreign Secretary Aizaz Chaudhry in Islamabad. A marked shift from the Congress government’s policy of strategic restraint, bordering on strategic indifference, is now evident. This hardline shift under the incumbent BJP government permeates both the foreign office and the NSA office, and has been unwittingly reaffirmed duringPrime Minister NarendraModi’s recent trip to Washington, which included joint Indo-US statements against terrorist networks operating out of Pakistan and Afghanistan.

The overriding assumptions in New Delhi, as per the editorial line of major Indian newspapers including The Hindu and The Times of India – i.e. the border crisis is a political ploy to buttress the standing of a beleaguered Pakistani Prime Minister, or that the Pakistan Army is sabotaging Nawaz’s overtures with India – hold little water. This is because it is after a year of savage wrangling on the TTP issue that the Pakistani leadership has finally launched a belated go-for-the-kill counterinsurgency operation in the tribal areas. Three months into Zarb-E-Azb, opening up a second front on the east precludes successful completion of the first. At this point in time, it will be an uphill task for the Army to scramble its resources and mobilize its troops from the western front to an eastern one. With the TTP and its splinter branch the JuA still active in Bajaur, Orakzai and Mohmand agencies, fresh threats posed by IS and Al-Qaeda only make a divided security focus in Pakistan an unattractive prospect.

According to a Reuters report this week, this August new Indian NSA and counterinsurgency strongman AjitDoval gave the go-ahead for Indian BSF and ground commanders in Jammu to exercise a free hand on the border – ‘no-holds-barred’ retaliatory permission, and a significant emboldened departure from previous government policy. Against this backdrop, New Delhi’s new-Kashmir policy is also becoming clearer. Asking the United Nations Military Observer Group (UNMOGIP) to vacate its offices in the Indian capital this summer is matched by a consistent refusal to allow UN relief agencies carry out rescue and relief efforts after the Kashmir floods, or allow UN reps to visit the Indian side of the LoC to inspect damage. It should be noted that New Delhi’s increasingly virile foreign policy rhetoric is also directed to China’s role in the Asia Pacific – evident from Prime Minister Modi following the American line on the issue of the South China Sea territorial disputes despite Beijing’s efforts for better ties with the new Indian government.

Prime Minister NarendraModi is seeking to bring a paradigm shift in India’s treatment of the Kashmir issue, increasingly aimed at excluding Pakistan from a final settlement. With the ruling BJP moving towards dismantling Article 370, which accords ‘special status’ to Indian Kashmir on its ‘accession’ to India, BJP policymakers are now focused on employing a 3P (Prakash, Paryavaran, Paryatan or energy, environment and tourism) development strategy to bag a BJP-led majority – i.e. 44 seats in an 87-member assembly. The results of such an outcome could be far-reaching: IoK could end up having its first ever BJP chief minister, while New Delhi would move to provide union territory status to Ladakh, separate Jammu from the Valley, and facilitate the return of Hindu Pandits who had fled the Valley. An auxiliary issue – restrictions on Indian citizens from purchasing land or property in Kashmir – can only be decided by the J&K assembly, since this prohibition flows from a local Dogra-era law that the central government has been unable to overturn thus far.

How India’s emboldened generals are complicating the situation

Previous and present Indian army chiefs have talked of adopting a tough line towards Pakistan, reflecting the growing role of the Indian army in shaping India’s Pakistan policy, especially after the advent of the BJP to power. But as India contemplates repealing the draconian 1990 Armed Forces Special Powers Act (AFSPA) in order to woo Kashmiri voters, Indian Army generals continue to resist, rejecting proposals that call for the repeal of AFSPA from Srinagar and Badgam, arguing that the J&K Police and the Central Reserve Police Force protecting these districts provide only one layer of security, and that the AFSPA is needed to counter an omnipresent threat of militancy.

The need to maintain peace along the LoC is equally critical for the Indian establishment. As winter sets in, the BSF will be desperately looking to plug infiltration into the Valley. With the border in heat, that becomes significantly harder to do. India must also realize that contests of one-upmanship on the LoC are the single-biggest driver of militant payrolls for networks looking to derail the Indo-Pak peace track. But with the red-lines for Pakistan’s nuclear threshold (purposely) ambiguous, even India cannot afford to push Pakistan to the brink; instead, it is resorting to what has been described as ‘calculated escalation’. The latest telephone exchange by the two DGMOs (almost two weeks after violence first broke out) lends some credence to this theory.

Since April, the situation on the LoC has been steadily worsening: violations in the Poonch and Samba districts increased in frequency through the summer. The attitude of the Indian government towards surrendered militants and the continued harassment of ordinary Kashmiris have also hurt counter-insurgency efforts. In May three Kashmiri students were abused and beaten for refusing to chant anti-Pakistan slogans. 100 Kashmiri students staged a protest after the incident against the university’s failure to provide security. The armed insurgency in Kashmir is also gradually changing course to thrive on more homegrown militants, rather than foreign fighters, taking advantage of social media tools such as WhatsApp and Twitter. This year, infiltration by foreign insurgents dropped to an all time low: less than 40 militants infiltrated the Valley – the lowest number figure in the history of the Kashmir militancy according to the Times of India. Instead, the shift towards local recruits and the HizbulMujahideen (which has greater local affinity than the Lashkar-e-Taiba) helps not only cut costs but also creates a gulf between these militants and the Pakistani government.

For Islamabad, this year’s violations are more detrimental than last year’s, given the unconditional overtures that the civilian government in Islamabad has made to New Delhi since Prime Minister Modi came to power in May. Fighting along the LoC thus marks an unwelcome departure from a string of Track I and IIs that have spent the past year-and-a-half chugging from status quo to stalemate in spite of friendly moves by Islamabad. There was no meeting between the two Prime Ministers on the sidelines of the UNGA either, even though such encounters are the norm. The lack of reciprocity from New Delhi, ostensibly over the delayed Mumbai trials and Pakistan’s inability to satisfy Indian concerns vis-à-vis terrorism, has caused upset in Islamabad, with many centrists asking the government to moderate its unrequited plea for friendship in light of Indian indifference to these overtures.