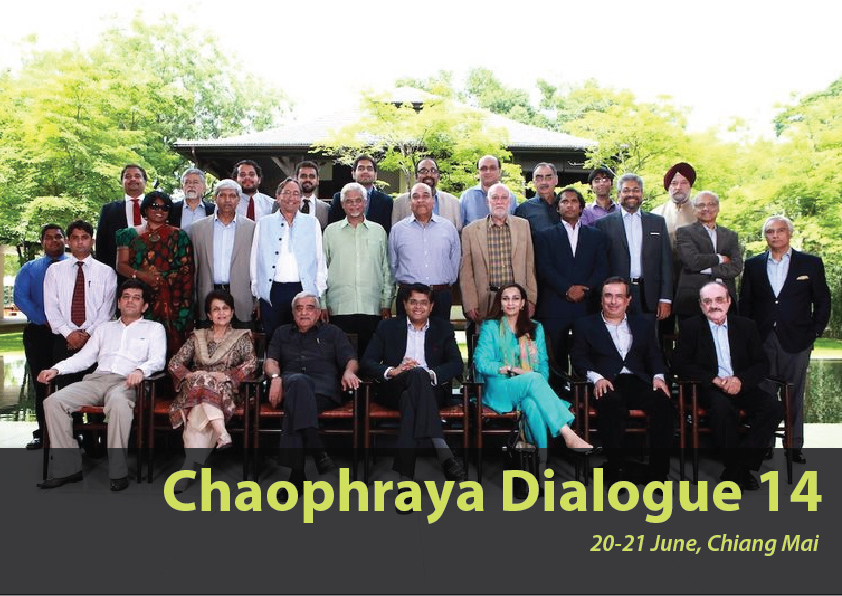 Chiang Mai, Thailand: Key opinion makers from India and Pakistan, including parliamentarians, former diplomats, former military officers, mediapersons and policy experts met in Chiang Mai for the 14th round of the Chaophraya Dialogue from 20 – 21 June 2014, organized by the Jinnah Institute (JI) and the Australia India Institute (AII).

The Chaophraya Dialogue is the longest consistently running Indo-Pak Track-II jointly administered by the Jinnah Institute (JI) and Australia India Institute (AII) to encourage informed policy dialogue on Indo-Pak relations. The process is now in its sixth year and has so far led to 14 rounds of dialogue.

The 14th round of the Dialogue focused on the significance of a new government in New Delhi and the opportunities it creates for Indo-Pak relations, particularly in trade and economic integration. Special focus was given to the ongoing election in Afghanistan and the prospects for peace and security in the region following ISAF’s drawdown towards the end of 2014.  Participants agreed to the following:

·         They welcomed the May 27, 2014 meeting between the Prime Ministers of India and Pakistan in New Delhi and the decision to task the Foreign Secretaries with finding ways to move the bilateral relationship forward;

·         They expressed the hope that the two Foreign Secretaries would meet expeditiously and would be able to produce a credible roadmap so that when the two Prime Ministers meet next, the dialogue process can resume in earnest;

·         They hoped that this dialogue process should cover all bilateral issues as has been indicated by both Prime Ministers;

·         They recommended that affirmative steps need to be taken for additional confidence-building measures (CBMs) to lessen the trust deficit, particularly the establishment of a hotline linking the two PMs. Other CBMs could include meetings between the two Army chiefs as well as the heads of intelligence agencies  and more frequent interaction between DGMOs;

·         They urged that measures agreed to during past dialogue processes be revived and steps  taken to implement them in letter and spirit;

·         As part of the revitalization of bilateral relations, they urged the two governments to liberalize the visa regime for students, academics and journalists, in particular for correspondents to be stationed in each other’s capitals;

·         Recalling the 7th round of trade talks in Islamabad in September 2012, as well as the joint press statement of commerce ministers made on 18 January, 2014 in New Delhi, they welcomed the commitment of both countries to expeditiously establish normal trading relations;

·         They expressed satisfaction at the two PMs’ recent interaction in New Delhi on May 26, 2014, and noted their resolve to carry forward the process of trade normalization. They hoped that the Commerce Ministers would use the opportunity provided by the meeting of SAFTA Ministerial Council in Thimpu on July 2014, to arrive at an early conclusion of discussions on the subject;

·         They emphasized the importance of trade in facilitating economic growth in South Asia;

·         They welcomed the Afghan electoral process and expressed the hope that the current controversies will be resolved amicably;

·         They expressed the hope that a smooth political transition would lead to a peaceful and stable Afghanistan;

·         They urged the international community to fulfill all pledges made at Chicago and Tokyo and, where possible, to augment resources committed to ease Afghanistan’s economic transition;

·         They reiterated the recommendation that India and Pakistan should explore the possibility of joint projects identified by Afghan authorities, in IT, training and education, telecommunications, healthcare, agriculture, etc., and consider the setting up of a collaborative fund for this purpose.

·         They expressed the hope that Afghanistan could become a hub for regional trade and energy flows.

·         They recommended that India and Pakistan should commit themselves to non-interference in the internal affairs of Afghanistan and urged that Afghanistan should not allow the use of its soil for actions prejudicial to peace and security in the region.

·         They recommended that India and Pakistan should make constructive efforts towards an Afghan-led and Afghan-owned reconciliation process that is inclusive and upholds the constitutional rights of all Afghans. In addition, they urged that women’s voices be included in decision making fora.

·         They underscored that this process was key to preventing civil strife following the ISAF drawdown and recommended that all parties support the reconciliation process and work for its success.