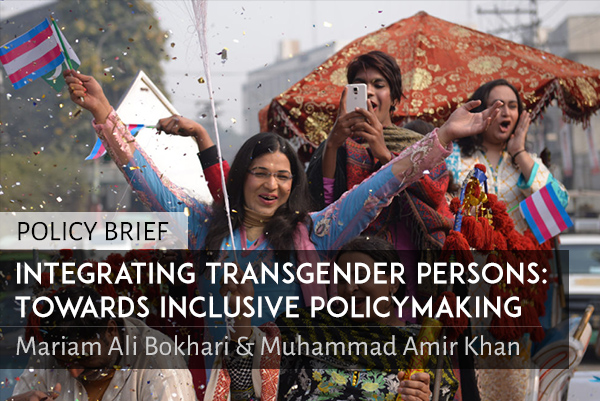 Giving transgender persons a fuller measure of their citizenship rights in Pakistan has been a staple objective of political party manifestos since the last three elections. Several legislative and policy measures allowing for the socio-economic uplift and political participation of transgender persons have taken place over the last decade, overturning a modicum of their civic and political marginalisation. These policies have so far followed medium term ‘provision’ models where transgender beneficiaries stay at the receiving end of resource allocations and power dispensations. They are patronised, never fully empowered, and longer term measures to transform the political economy of their marginalisation are not initiated. Transgender persons share this patronage with other disenfranchised groups receiving state hand-outs, but their integration in society is far more challenging owing to deeply ingrained social prejudices that prevent a normalisation of their presence and participation in everyday life. With due recognition to the steps taken by successive governments and judiciary, whose combined efforts have improved the quality of citizenship enjoyed by transgender persons in recent years, it is worth setting the bar higher on provision of entitlements and their planned outcomes. To ensure the welfare of citizens is a duty of the state, in addition to dismantling the barriers that prevent them from accessing it.

This requires periodic stocktaking of policymaking and governance to gauge if any benefits have accrued. One way to do this is to look for evidence for the “participation of marginalised groups in existing representative processes, institutions and decision making with the aim of creating equitable access, ownership and recognition.”1We know that evidence on this is thin, as later sections of this brief will show. We also know that participation is a necessary but insufficient measure to integrate marginalised communities; among other things, it lays the onus of integration on marginalised groups to become part of unrepresentative and often hostile processes and institutions. Another way to create greater entry points for them and normalise their participation, is by way of supporting social cohesion. This aims at fostering common value systems across the ‘whole of society’ which enable acceptance and mutual empowerment among all citizens.2 The policy learnings from social cohesion are still being tabulated, but its major advantage is focusing on social majorities rather than problematising minorities.