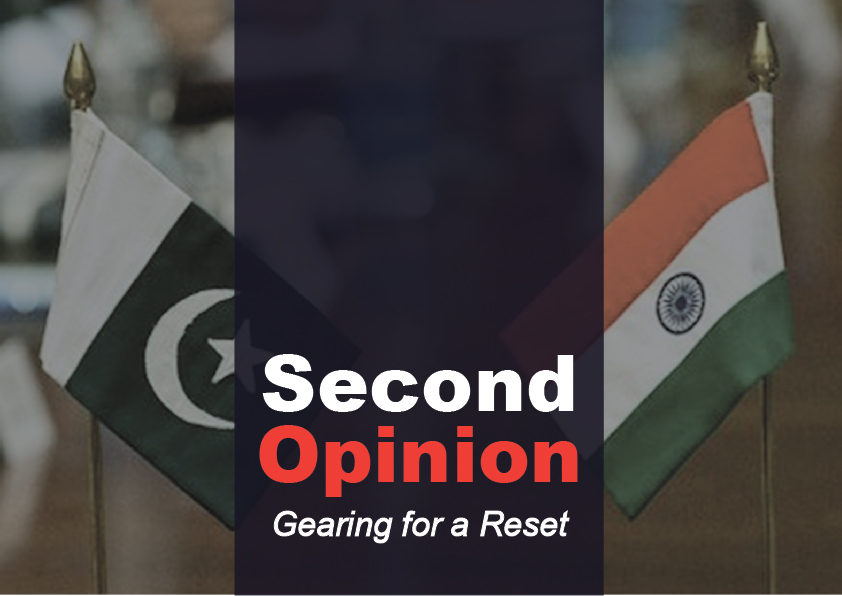 In the wake of a tense quarter for Indo-Pak relations and continuing violence on the Line of Control (LoC), the two Foreign Secretaries are finally set to meet this week – a first since talks were suspended in January 2013. On the side-lines of the fourth Islamabad Dialogue, Jinnah Institute asked a select panel of policy experts and journalists from Pakistan and India to share their views on Indian Foreign Secretary S. Jaishankar’s visit to Islamabad on March 3, prospects for building peace and overcoming existing roadblocks in the bilateral Indo-Pak relationship.

an unequivocal good at this juncture in Indo-Pak relations, but added that hope for improved relations cannot remain minus a plan indefinitely. Seeing New Delhi retrace its steps to the well tread path of dialogue, one has to ask: where is the Modi sarkar’s roadmap for engaging with Pakistan? Have six months of going it alone enabled retrospective rethink, or will it entail a return to the familiar demand of controlling terrorism? If terrorism remains the only condition from New Delhi, and the Working Boundary remains a site of new bloodshed, then the signal is clear: the fight is expanding. That is certainly not something the nuclearized region can afford.

Meanwhile, Pakistan’s Foreign Office has to spell out its redlines and clearly relate the government’s major role in actively rooting out terrorist traffic across the LoC . Exchanging chapter and verse with the other side is necessary to lower heat on this issue; both sides have strong suits to bear, but Pakistan must attempt to tell its story clearly behind the headlines if it wants the headline to change.

Pakistan also needs to ask New Delhi for strategic clarity on the issue of resumption of talks. The Pakistani team will have to sell sustained engagement as pre-requisite for regional order and stability. With the US troop withdrawal schedule in Afghanistan now in a state of flux, both capitals will have to find a way of avoiding the shadow wars that played out in the ’90s, instead working together to ensure that Kabul’s democratic and security gains are not undone. India will also have to recognize that in a changing geopolitical landscape, not engaging Pakistan is no longer smart policy. More crucially, bypassing Pakistan to access Western Asia will only undermine trust, of which there is already short supply.

The two Foreign Secretaries will also have to chalk out a roadmap for enhancing business and trade, and maximising on social capital. True, India continues to grow in spite of a strained relationship with its western neighbor, but businessmen and investors on either side of the border agree that the dividends of a healthier relationship will percolate growth numbers. A huge youth dividend on both sides offers greater opportunities for cooperation on a host of fronts, including employment, social protection and inclusive participation, and the two diplomats meeting tomorrow should be actively mindful of these other facts on the ground.

Amb. Najmuddin Shaikh, former Foreign Secretary, said that while the visit of the Indian Foreign Secretary has been termed a ‘SAARC Yatra’, the announcement by the Indian Foreign Office Spokesperson that talks with Pakistan would cover all issues including Jammu and Kashmir indicates that there is a willingness on India’s part to resume discussions on all the issues that form part of the Composite Dialogue.

From Pakistan’s perspective, the first priority will be ending the breaches of the 2004 ceasefire agreement along the Working Boundary and the Line of Control (LoC) – a necessary prerequisite for winning the internal battle that Pakistan is waging against terrorism and in the step-by-step success of which India has a stake.

While definitive finalisation of agreements or implementation of existing agreements on Sir Creek, Siachen and NDMA may not be on the cards, an understanding on dates for meetings on these issues can be expected.

There would be an exchange of ideas on how the ‘Kashmir’ dialogue is to be resumed. As a small step there may be an agreement on the proposal for opening additional crossing points across the LoC and on deployment of equipment to ensure that only legitimate items form part of the cross LoC trade.

Positive developments on these issues can pave the way for substantive discussions on the advancement of regional integration that the ‘SAARC Yatra’ will seek to promote and segue into the contribution that such integration would make to advancing peace and stability in Afghanistan. The Pakistan side while highlighting the efforts it is making to promote reconciliation in Afghanistan will ask India to join other regional countries in using their influence to promote this objective.

Indian concerns about the slow pace of action against the alleged perpetrators of the Mumbai incident and Pakistan’s concerns about Indian activities in Baluchistan will be raised, but will hopefully not be the centerpiece of the dialogue.

Slow incremental progress and the creation of a more positive ambience rather than spectacular breakthroughs should be the optimal expectation.

Amb. Jayant Prasad, former Indian Ambassador to Nepal, Afghanistan and the United Nations Conference on Disarmament, felt it would be

better to remain sober and realistic in expectations of quick returns from Foreign Secretary Jaishankar’s visit to Islamabad next week. While there has been a degree of continuity in India’s regional foreign and security policy approach over the last decade, the present BJP government in India certainly has more space to seek solutions to many of the bilateral issues between the two neighbours. Dr. Manmohan Singh had maintained that while borders could not be changed, they could become irrelevant, and Prime Minister Modi has echoed this sentiment at Kathmandu when he said he was determined to convert borders into bridges, not barriers.

At the same time, peacemakers in India and Pakistan need to pick up the threads from the Simla Agreement and the Lahore process. The essential components of future exchanges will have to include a comprehensive dialogue on all outstanding issues, including Jammu & Kashmir and the issue of dismantling infrastructure that assists cross-border terrorism. Crucially at this juncture, with the Foreign Secretaries’ meeting less than a day away, now is not the time to second-guess how they should go forward. In the short term, India and Pakistan need peace and tranquillity on the Line of Control (LoC) and the international boundary, and more confidence building measures, especially those facilitating people-to-people contacts across the LoC in J&K. If these can engender greater trust in the medium term, the comprehensive dialogue process could lead to possible resolution of issues. In the long term, both sides will have to build regional integration and connectivity, linking the Indian subcontinent to Iran and Central Asia.

Mariana Baabar, Diplomatic Correspondent with The News, said it would be naïve to expect any tangible breakthroughs or concrete outcomes from the upcoming Foreign Secretary talks, simply because there had been no formal interactions between officials from either India or Pakistan since 2013. Months of sustained engagement was a vital precursor for big takeaways. Secondly, India’s Ministry of External Affairs had made it clear that the visit to Pakistan was part of a larger ‘SAARC Yatra’ – therein implying that many of the themes that would be discussed would be remnants from discussions and deliberations that had taken place between SAARC counties at Kathmandu in November. Notably, there are no high expectations in either the media or in the respective Foreign Office establishments of the two countries, and this would hopefully take the pressure off the two Foreign Secretaries allowing them to explore areas of common ground and discuss the feasibility of picking up the threads of the dialogue. Ms. Baabar further suggested that a free and frank discussion on the issue of terrorism will be beneficial between the two countries as long as such discussions are not burdened by ‘Made in Pakistan’ allegations. Terrorism continues to be a global threat, and India should appreciate Pakistan’s role since 9/11 in helping foil a series of major terrorist attacks. Cognisance of this will be a healthy start for the two countries, allow for a build-up of trust and confidence, and put old suspicions to bed.

At the same time, it is worth noting changes in India since talks were last called off in August. Pakistan has maintained a consistent position since 2014: that the onus for talks lies on India, and that talks would have to cover all issues including Kashmir as per the Simla Accord.The big change across the border was in the way that India has reacted in different ways to nine-month old ‘Modi sarkar’, with many quarters objecting to the ‘ghar wapsi’ programme and Prime Minister Modi’s initial silence on the persecution of minorities, which could perhaps explain the recent amicability in New Delhi’s posturing towards Pakistan. Recent elections in Jammu & Kashmir have also seen the PDP win concessions from the BJP where talks with Pakistan and the Hurriyat have been accepted.

Suhasini Haider, Diplomatic and Strategic Affairs Editor of The Hindu, felt that a roadmap offering a direction for future engagement might

be the best possible outcome from the Indian Foreign Secretary’s visit to Islamabad. Officials in both India and Pakistan are keen to manage expectations surrounding the upcoming Foreign Secretaries’ meeting, given that Pakistan is the only SAARC member country which India did not have a dialogue process with at present. During the upcoming meeting, the two Foreign Secretaries will in all likelihood assess the ground realities in both countries, and search for common ground, which could provide a basis for future conversations.

At the same time it is important to recognise that the bilateral environment is not roadblock-free. India’s cancellation of Foreign Secretary talks in August have altered the dynamic between the two countries, and many in Pakistan viewed the decision as a redrawing of lines in New Delhi. It is now felt in India that Pakistan, too, has subsequently hardened its position on Kashmir. It has also become clear that events on the LoC have a dynamic of their own, and it is a matter of concern that the biggest CBM between Pakistan and India – the ceasefire – is in danger. In this context, it is hoped that if talks between the two counties go well, the LoC will also see a reduction in tensions. Another challenge for peace is likely to be terror: while it was clear that the Pakistani government and Army were fully engaged in fighting terrorism, India is still waiting for real action against terror groups that threaten India. Allegations that India might have had a role in the Peshawar attack will be equally damaging to rapprochement efforts.

The views in this publication do not necessarily reflect those of the Jinnah Institute, its Board of Directors, Board of Advisors or management. Unless noted otherwise, all material is property of the Institute. Copyright © Jinnah Institute 2015