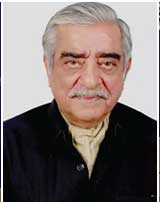 He obtained degrees of B.Com from Sindh University and an M.A. from the Fletcher School of Law and Diplomacy. He is a political and security commentator, and is regularly published in international relations journals, and featured in local and foreign media.