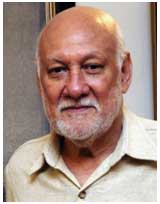 Ambassador (rtd) Aziz Ahmad Khan is a career diplomat who is consultant at the National Defence University in Islamabad. He travels extensively at the international level to lecture at strategic security conferences with particular reference to Pakistan’s foreign policy challenges. He has served as Pakistan’s High Commissioner to New Delhi from June 2003-2006, and was Additional Foreign Secretary (June 2000 to June 2002).

Khan joined the Pakistan Foreign Service in 1969 and has distinguished himself in high posts such as Pakistan’s High Commissioner to Malaysia (’95-’96) and Pakistan’s Ambassador to Afghanistan (Nov 1996 to June 2000).
Khan has also served as Spokesman of the Ministry of Foreign Affairs from November 2001 to June 2003. He was Director General of the Foreign Service Academy from June 2002 to June 2003. Apart from his role as Deputy Chief of Mission at New Delhi and Consul General at Los Angeles, he has also served in various capacities in Pakistan Missions in Buenos Aires, Brasilia, Maputo, Vienna and Lisbon.

He is also Executive Advisor to the international relations quarterly, “The Criterion”. He has served on Jinnah Institute’s Board of Advisors through 2010-2011.