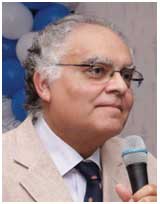 Dr. Akmal Hussain is an economist and specializes in development and institution-building for overcoming poverty. Currently, he is the Chairman of the Working Group on Poverty Reduction Strategy and Human Resource Development for the 10th Five Year Plan, Planning Commission, Government of Pakistan and a Professor of Economics at the Beaconhouse National University in Lahore.
Dr. Hussain has worked as the honorary CEO of the Punjab Rural Support Program (PRSP). He has also helped to establish the Pakistan Poverty Alleviation Fund and LEAD (Leadership for Environment and Development, Pakistan) as the founding member of the Board of Directors of both institutions. In 2004, he was a member of the Prime Minister’s Task Force on Poverty Alleviation and Employment Generation in 2004, member of the President Musharraf’s Economic Advisory Board during 1999-2002 and earlier a member of the Prime Minister’s Economic Affairs Committee as an independent economist working on an honorary basis, until May 1998. He was Chairman of the working group on Poverty Alleviation for the preparation of the Ninth Five-Year Plan 1998-2003 and has also contributed to the Report of the National Commission on Agriculture. Dr. Hussain has been working for regional cooperation in South Asia as a member of the Board of Governors of the South Asia Centre for Policy Studies (SACEPS) and the Independent Group for South Asian Cooperation (IGSAC).
He has authored three books on economic policy and co-authored/contributed chapters to 27 other books, 29 publications in journals and contributed over 100 newspaper articles on economic and social issues; has also undertaken research for international agencies, including the World Bank, United Nations University, ILO/ARTEP, Swiss Development Corporation, Dutch Government and CIDA.