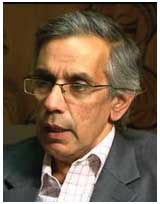 Dr. S Akbar Zaidi is an independent economist based in Karachi, with specialisation in political economy. He is currently a Visiting Professor at Columbia University, with a joint position at SIPA, the School of International Public Affairs and at MESAAS, the Department of Middle Eastern, South Asian and African Studies. His research has focused on development and governance issues concerning South Asia.
Dr. Zaidi taught economics at the University of Karachi from 1983 to 1996 before becoming a visiting scholar at the University of Oxford (1998) and later a research fellow at the University of Pennsylvania’s Institute for the Advanced Study of India in New Delhi (2002–03). From 2004 to 2005 he was a visiting professor at SAIS at Johns Hopkins University, and since 2010 has been at Columbia University.
He has written more than sixty academic articles and book chapters, and has authored or edited over a dozen books, including, Pakistan’s Economic and Social Development: The Domestic, Regional and Global Context (2004), Issues in Pakistan’s Economy (2005), and most recently, Military, Civil Society and Democratization in Pakistan, (2011).