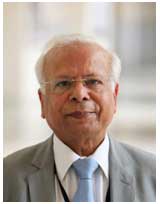 Ishrat Hussain Ishrat Husain is a renowned economist and former Governor of the State Bank of Pakistan. A recipient of Hilal-e-Imtiaz, Husain has served as Chairman, National Commission for Government Reforms reporting directly to the President and Prime Minister of Pakistan. He has also held the office of Dean and Director, Institute of Business Administration Karachi, the oldest graduate business school in Asia.

Mr. Husain has maintained an active scholarly interest in development issues. He has authored 18 books and monographs and contributed more than three dozen articles in refereed journals and 27 chapters in books. His book “Pakistan: The Economy of the Elitist State” published by Oxford University Press enjoys a wide audience in Pakistan and abroad.