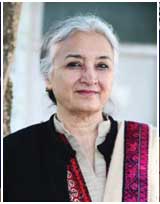 Ms. Khawar Mumtaz is currently serving as Chairperson National Commission on the Status of Women (NCSW). She brings almost 30 years of experience in advocacy on human rights, women’s empowerment and development issues. As one of the earliest members of the Women Action Forum (WAF), Ms. Mumtaz has played a pivotal role in shaping discourse on democracy and women’s rights in the country.

Ms. Mumtaz has served as CEO of Shirkat Gah Women’s Resource Centre and has been a member of ARROW, UNEP International Resource Panel, Punjab Rural Support Programme, and the PANOS South Asia Board among others.
She has authored several books which include Women’s Rights and the Punjab Peasant Movement (2012), Informal Economy Budget Analysis Pakistan study (2009), Beyond Risk Management: Vulnerability, Social Protection and Citizenship in Pakistan (2008).

In 2006, Ms. Mumtaz was awarded the Sitara-e-Imtiaz for social service and promotion of women’s rights. She has also been nominated for the Nobel Peace Prize in 2005 as one of 1,000 collectively nominated women from around the world.