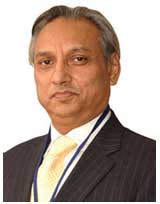 CEO and President of Tameer Bank

Nadeem Hussain is CEO and President of Tameer Bank, Pakistan’s first private sector microfinance bank and world leader in branchless banking. Hussain’s model bank has impacted over a million people by extending credit and mobile banking to the poor and the unbanked Pakistan, and has introduced the first health insurance program in rural areas to protect poor households from trauma.

Hussain has been on the Board of Governors of Institute of Business Administration, and is currently Vice-Chairman of Pakistan Microfinance Network, Trustee of Indus Foundation, and Member of the Renewable Energy Task Force for the Government of Pakistan. He has been in international banking for 27 years in Citibank/Citigroup in seven different countries and all major financial centers of the world. Mr. Hussain has, during his Citibank Career worked in Corporate Banking, Consumer Banking, Risk Management, Insurance, Transaction Banking and Treasury and member board of the Honk Kong Commodities Exchange.

Hussain has been chair of the United Nation’s MDG Session on Financial Inclusion in New York in September 2010, and is a frequent speaker at international forums on branchless banking for the unbanked. He writes and broadcasts frequently in Pakistan’s mainstream media on social policy, low-cost housing, and sustainable growth.