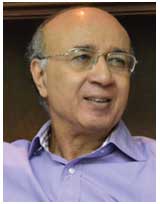 Governor of the State Bank of Pakistan

Shahid Hafiz Kardar is an economist and currently serving as the 16th Governor of the State Bank of Pakistan. Mr. Kardar had also served as Minister for Finance, Planning & Development, Excise and Taxation and Industries & Minerals Development, Government of Punjab from November 1999 to January 2001.

Mr. Kardar has also served as Chairman of the Punjab Education Foundation from June 2005-October 2008 and a Member of theNational Commission for Government Reform (2006-2008); Banking Laws Review Commission; the Advisory Board of Kashf Microfinance Bank Ltd.; and several government Committees and Task Forces set up by the Federal and Punjab Governments. He has been a visiting lecturer at Pakistan School of Public Policy, National Defence College, Pakistan Administrative Staff College, NIPA and Civil Services Academy. He is also a regular guest speaker at seminars organized within the country and abroad by academic institutions, multilateral and bilateral financial institutions and NGOs. He has also advised international institutions such as the World Bank, ADB and DFID on economic issues. He has authored three books and several papers on economic matters pertaining to Pakistan.