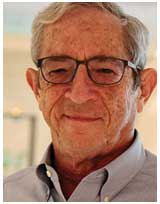 Stephen Cohen is senior fellow in foreign policy studies at the Brookings Institution. He is an expert on Pakistan, India, and South Asian security.

He is an emeritus professor at the University of Illinois at Urbana-Champaign. He has published extensively on the politics of South Asia and on security issues in the region. His books include; The Idea of Pakistan (2004); The Compound Crisis of 1990: Perception, Politics and Insecurity (2003); India: Emerging Power (2001); The Pakistan Army (second revised edition, 1998; Chinese edition, 1998; Urdu edition, 2001); The Indian Army: Its Contribution to the Development of a Nation (second revised paperback edition, 2001).

Dr. Cohen was a faculty member at the University of Illinois from 1965 to 1998. In 1992-93 he was Scholar-in-Residence at the Ford Foundation, New Delhi, and from 1985-87 a member of the Policy Planning Staff of the U.S. Department of State where he advised on matters pertaining to South Asia, security, and proliferation issues. He has appeared on national radio and television, including All Things Considered and Nightline, and is a regular contributor to BBC radio and television. He has served on study groups examining Asia sponsored by the Asia Society (1994), the Council on Foreign Relations (1996), and the Asia Foundation (2001); he is currently a member of the National Academy of Science’ Committee on International Security and Arms Control and is a member of the board of trustees of the Washington D.C.-based Public Education Center. Dr. Cohen was the co-founder and chair of the Workshop on Security, Technology and Arms Control for younger South Asian and Chinese strategists, held for the past eight years in Pakistan, India, Sri Lanka and China, and was an original member of the Research Committee of the South Asian strategic organization, the Regional Centre for Security Studies, Colombo.