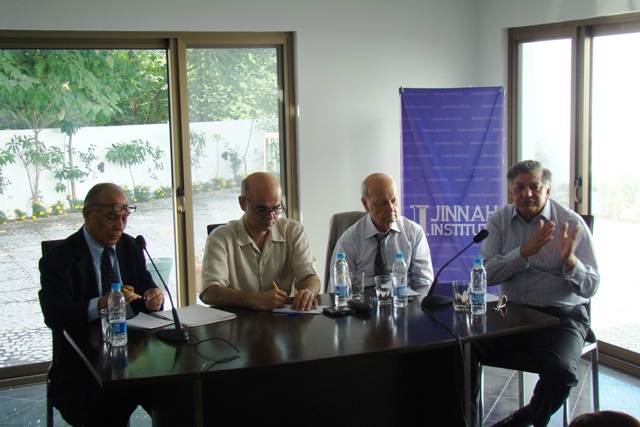 4th Policy Debate: “Pakistan-U.S. relationship must be rescued before it ruptures”

Islamabad, May 24, 2012: The Pakistan-U.S. relationship took a “nosedive“ last year, and must be rescued before it ruptures. These views were expressed at the fourth policy debate on “Re-evaluating Pakistan-U.S. Relations” held at the Jinnah Institute (JI). It was agreed that Pakistan as a nation must define its national interests through democratic means and address the strategic asymmetry that exists in Pak-U.S. relations. The discussion panel comprised  Lt. Gen. (retd) Talat Masood, defence analyst; Tanvir A. Khan, former Foreign Secretary; Riaz Khokhar, former Foreign Secretary, and was moderated by Mohammed Mallick, senior journalist and editor for The News. The policy debate was attended by former diplomats, academics and members of the policy and media communities.

Lt. Gen. (retd) Talat Masood was of the view that the Pak-US relationship is an important one, but suffered immensely in 2011. He believed serious measures need to be taken to arrest the declining levels of trust, or the bilateral relationship may rupture irreparably. In his view, transactional or not, the relationship should be made enduring. He recommended that Pakistan should keep its own interests in mind, and evaluate the way forward in Afghanistan as a supportive ally and not as a hindrance.

Riaz Khokhar stated that Pakistan’s response to the Salala attack was understandable and stopping the NATO supply routes was a legitimate step in that context but the review of bilateral relations with the U.S. and of Pakistan’s foreign policy in general, should have been completed within two weeks at maximum. Mr. Khokhar added that the governments of Pakistan and the U.S. should take concrete steps to reduce suspicions and distrust between the armed forces and intelligence agencies of the countries. “When I was Foreign Secretary, all substantive agreements with the U.S. were verbal; the Foreign Office was not part of them”, he said, and urged that all future agreements between the two allies must be transparent and must be owned by the peoples of both countries.

Tanvir A. Khan stated that the Pak-U.S. relationship has always been transactional and the Pakistani people feel that the U.S. is being appeased. “What we are seeing is a mutually contrived orchestration of what to do”, he said. He added that the Pakistan Army viewed anti-Pakistan sentiments in Washington as part of a propaganda barrage with the intent of reconfiguring the country’s armed forces and their security role in the region. On the issue of the NATO attack on the Salala check post, Mr. Khan’s stance was that Pakistan took a bold but unsustainable step and inevitably will have to re-open the supply routes. Mr. Khan feared that the Pakistan Army had also lost its “gusto” with respect to primacy in critical aspects of the country‘s foreign policy. “There is another crisis that may loom larger than the current impasse in Pak-U.S. relations and that is the loss of Pakistan‘s leverage vis-à-vis the endgame in Afghanistan“, he added.

The event was open to media persons and there was a lively discussion on the future of the Pak-US relationship. The issue of Dr. Afridi’s sentence was also raised and the panelists agreed that this was a new complication in the bilateral relationship. Raza Rumi, Director Policy and Programs, Jinnah Institute reiterated that the Institute was attempting to promote an informed discourse on foreign policy in the country. He concluded the discussion by saying that improvement in Pak-U.S. relations was crucial for regional stability; and more nuanced debate was needed to counter the emotional narratives on policy issues.