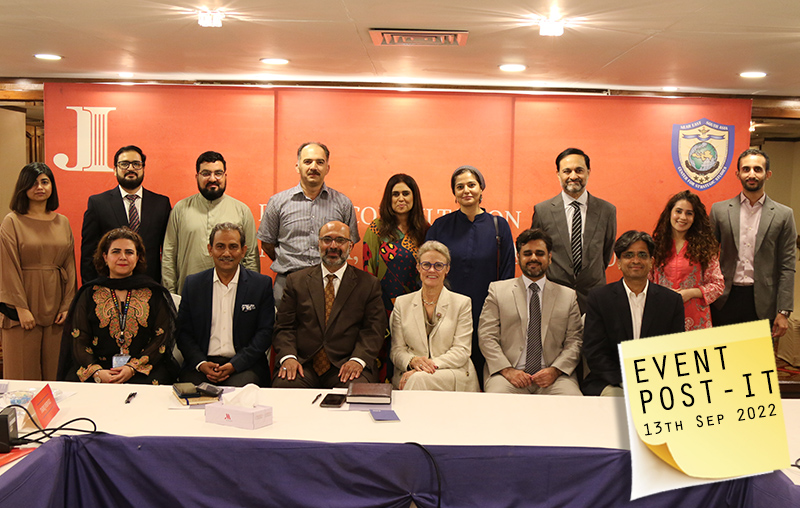 Jinnah Institute in collaboration with Near East South Asia (NESA) Centre convened a day long conference on 13th September, 2022 titled ‘Academia, Media and National Security’. The conference brought together policy practitioners, academics, mediapersons and opinion leaders to weigh in on the role of policy stakeholders who implement and audit national security frameworks. There are multiple actors and institutions at work in the security sector, whose collective efforts have yielded a series of reforms in policy procedures, as well as delivery mechanisms over the last decade. However, policy reform is a continuous and painstaking process that needs greater coordination, transparency and communication between state institutions to achieve desirable policy outcomes. The conference aimed to create dialogue between state institutions and civil society organizations to help review procedural gaps, best practices, shared opportunities and limitations that determine the course of national security, and security sector reform. Participants highlighted the historically limited role assigned to academia in shaping Pakistan’s national security policies. The academics who did enjoy influence over policy usually came from traditional security backgrounds, and helped constitute a specific policy outlook and security architecture. However, participants were encouraged by the National Security Division’s more recent outreach towards academics and policy experts in the preparation for the National Security Policy (2022), which ran several consultations with groups of experts to frame the latest policy document. Participants underscored that national security was still not an inclusive domain, particularly for women or marginalized groups, and there is a long way to go before policy prescriptions can adequately reflect emerging realities on ground, such as the mounting occurrence of sexual and gender based violence.

They also discussed an institutional bias within state bodies against independent scholars and researchers, whose work is regarded with distrust and their recommendations never well received, even if backed by evidence. Participants discussed that conducting field research on security related themes had always been challenging, and now with added state scrutiny over civil society organizations’ research agendas, sources of funding, and project activities, there is shrinking space for producing credible research.

They saw that the mushrooming of state sponsored think tanks has not created a ‘research culture’ within the sector, rather a proliferation of policy writing that is geared towards deliberate narratives. Participants also felt that educational institutions had to share the blame for not encouraging critical thinking and open inquiry among student bodies, especially in public universities where radicalization and religious extremism is fairly commonplace.

It was pointed out that research was largely dependent on donors’ assistance, which skewed the private sector research agenda towards narrow project interests. In the absence of alternative funding, it was difficult to sustain research initiatives. However, participants stated that private think tanks and civil society organizations had a unique opportunity to contribute towards the national security discourse as they were unhindered by state or governmental stances, and could create a credible niche in research, policy advocacy and inter-agency dialogue. Participants described successes in police reform over two decades, which had gradually transformed civilian law enforcement institutions, as well as police officers. They shared that evidence based reform had inculcated a culture of objective learning within the policy academy, and there was need to further consolidate approaches based on evidence, as opposed to anecdotal knowledge or personalized methods towards improving delivery. They cited that the induction of police officers into doctoral programs had been a game changer for research, knowledge creation, and management practices. Senior practitioners emphasized that police reforms must be community-based and aimed at achieving community satisfaction, in addition to reducing the gap between duty bearers and citizens.

Participants regretted that civilian law enforcement finds a passing mention in the National Security Policy announced earlier this year; police officials were not consulted in the drafting of the policy framework, and the responsibility to safeguard citizens’ lives and state interests appears to rest solely with the military. The fact that the elements of internal security are not discussed with the police department is alarming. They emphasized that civilian law enforcement has shouldered a greater burden of combatting terrorism and extremism over the last two decades, as most often it has occurred in the form of localized, everyday violence. Unless Pakistan Police are given their due recognition as an institutional partner in the country’s security, a dichotomy of mandate and responsibility will persist, they stated.

On the subject of the police’s common perception as a corrupt and inefficient force, participants highlighted that there have been improvements in attitude and behaviour, especially among departments that deal with citizens on daily basis. There have been trainings to build capacity and to sensitize officers on gender and child issues. However, the lack of a coordinated communication strategy makes it impossible to share any successes. Participants cited examples from official websites that were not maintained or updated, as well as the absence of any official statistics that could be published for public interest. While the police department can benefit from public interfacing through digital platforms, it has limited interest and capacity in doing so.

The police department’s relationship with media is characterized by mutual distrust. Mediapersons stated that the interaction with police officials is often heavy handed, whereas police officials pointed out a constant ‘maligning campaign’ by media in spite of attempts to assist them. They agreed that efforts have been made to improve police-media ties, but these have been sporadic and dependent on individuals. Participants also suggested that the institutional ‘friction’ between media and police need not be seen as a disadvantage, as some degree of conflict can be beneficial for both. Police and media were never meant to be on the same side, and an effective audit of performance can only happen if both institutions maintain distance, and a manageable level of friction.

Role of Media in National Security Participants stated that national security priorities across the world are determined through consultation and consensus of multiple state bodies, as well as private actors, but in Pakistan this mandate is disproportionately skewed in favour of certain institutions. National security frameworks also appear to have shifting goal posts, but whose substance carries more of the same.

They observed that media does not enjoy many of the freedoms that it did a few years ago. Mediapersons have been subjected to intimidation, harassment and torture, especially in cases involving national security and human rights. Participants with media backgrounds stated that their top ask from state institutions is a degree of transparency in procedure. While media does not seek ‘unchecked freedom’ in reporting news that runs contrary to national security goals, the ability to refuse embedded journalism is the bare minimum it is entitled to.

Participants discussed that state representatives are seldom exposed to discussions on civic rights and their centrality to national security. While it is appreciable that national security policies are paying attention to vulnerable communities, reportage on the quality of their citizenship and the demand for rights turns into an inconvenient truth.

Participants questioned whether a structured nexus exists between institutions that produce knowledge, the national security establishment and media; if it were to be strengthened, what could be the relational framework? They stated that the quality of scholarship being produced did not serve the media’s purpose, nor the State’s. The media too, needed to question its ethics and examine its willingness to channel progressive discourse. In a time of political polarization, resurgent militancy, climate stress and economic breakdown, was the media capable of becoming an agent of positive change, they asked.