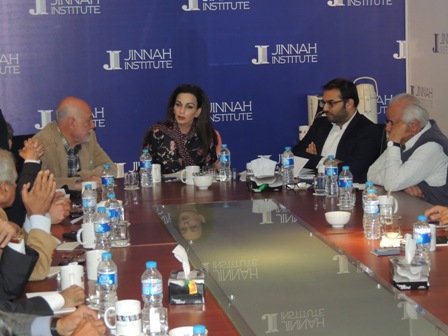 ISLAMABAD, 14 November, 2014: Afghan President Ashraf Ghani’s first state visit to Pakistan on Friday, and the accompanying political and security transition in Afghanistan, offer a rare and historic opportunity for both countries to hit reset in relations; this was the conclusion arrived at by a senior policy and media experts gathered for a Jinnah Institute roundtable entitled, “Weathering New Regional Challenges: Pakistan and the Neighbourhood” on Friday.

Participants at the roundtable, chaired by Jinnah Institute President and former Ambassador to the United States Sherry Rehman, noted that Pakistan’s position on Afghanistan has been defined by a security-centric policy for over two decades, and it was important to develop a prism for engaging Afghanistan that could transcend narrow security metrics and leverage economic, fiscal and social interests. Participants further observed that the advent of new technologies and infrastructure also offered the potential for greater regional connectivity and an unbridled opportunity to cash in on regional hydrocarbon projects.

Taking stock of the takeaways from the Afghan President’s first day in Islamabad, roundtable participants welcomed the new unity government in Afghanistan, and agreed that the difficulty in cobbling together a political cabinet in Kabul demonstrated the challenges still confronting democratic rehabilitation. Participants further noted that Afghanistan’s neighbours including China are looking to contain negative spillover, and are seeking opportunities to reset relations with the new Kabul government.
It was also noted at the roundtable that President Ashraf Ghani’s visit to Islamabad came in the wake of high-profile visits by National Security Advisor Sartaj Aziz, Army Chief Raheel Sharif and DG ISI Rizwan Akhtar to Kabul, indicative of the mutual desire to turn a fresh page in bilateral relations.

While a receding US footprint in the region is ongoing, it was suggested that Pakistan should look to broaden diplomatic engagement and outreach with Afghanistan. In this regard, China’s recent initiative for Afghan reconciliation was welcomed by participants who suggested that Pakistan should support such outreach by Beijing. The importance of President Ghani making his first presidential visit to China was underscored, and China’s search for a greater role in Afghanistan after 2014 was flagged as opportune for Pakistan.