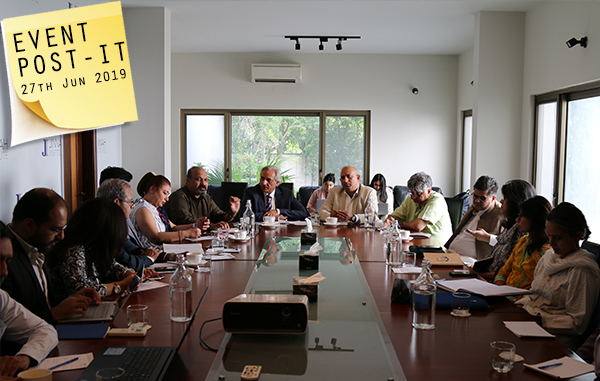 Austerity Budget: Assessing the Impact on Development and Pro-poor Growth

The federal budget 2019-2020 and the government’s economic policy will have disastrous consequences for Pakistan’s middle income groups, who are expected to face a 40 percent compression in disposable income while taxes, inflation, and unemployment increases. This was the key takeaway at Jinnah Institute’s policy Roundtable titled ‘Austerity Budget: Assessing the Impact on Development and Pro-poor Growth’, moderated by Nadeem Hussain, CEO of Planet N Group.

Former member of the PM’s Economic Advisory Council, Sakib Sherani shared Pakistan’s macro-economic indicators, highlighting the accumulated financing gap over previous years. He explained that the rising current account deficit and an overvalued rupee have resulted in a severe debt trap. Simultaneously, the formal economy which drives investment, generates tax revenue and employment, is shrinking in size. He also informed that Pakistan’s exports that currently stand at 8 percent of GDP are the lowest among all emerging markets and constitute a dwindling portion of Pakistan’s GDP. Overvaluation of the rupee over the last five years has meant that Pakistan ran a huge current account deficit, the largest in all emerging markets, and the rupee has been falling because the external financing gap was over $23 billion in 2018. This is the first time that Pakistan has started facing a currency crisis of the magnitude experienced in Argentina and Zimbabwe. “Despite periodic and short lived success at macro stabilization, the environment for long-run economic growth remains challenging. Stabilization is a necessary condition, but not a sufficient one,” Mr. Sherani stated.

Dr. Faisal Bari, academic and member of the Economic Advisory Council said that the government is underestimating the consequences of the Budget 2019-2020. Jobs are vanishing, inflation is hitting people very hard and utility prices are pushing people in debt. There is absolutely no guarantee that some years of pursuing stabilization policies led by any government will yield benefits or create a growth path. Pakistan needs over 7 percent sustainable growth but there is little appetite for the kind of institutional arrangements and policies needed to make that growth occur. “Citizens enduring pain for stabilization” should mean that some relief will be afforded to them eventually, but the level of competence to bring about systemic overhauls across the system leaves little room for optimism. In the meanwhile, people will continue to experience difficulties caused by vicious cycles of stabilization that outrun the government’s term. Dr. Bari also stated that other countries in the region like Bangladesh and Sri Lanka had made critical investments in human capital and social sectors that were paying economic dividends now. “Even if Pakistan were to enable growth trends internally do we have requisite human resource and skills available to take growth forward?” he asked.

Dr. Ijaz Nabi, member of the Economic Advisory Council, also drew attention to the economy’s structural problems that create inconsistent growth patterns, and regular trends of regression after momentary stabilization. He recalled that many economies of the Far East found their wealth disappear in a matter of months after the Asian Financial Crisis, and resorted to lending from the IMF. There have been similar moments in Pakistan’s economic history, like 1971, when the rupee had crashed but the economy found other ways of bouncing back. He stated that without addressing economic fundamentals, such as gross systemic inefficiencies and corruption across institutions, there is little chance that governments will be able to break out of the stabilization rut they find themselves in. Pakistan too must realize that its governmental expenditures outstrip its capacity to raise revenue and lending from the IMF becomes inevitable.

Former Board Of Investment Chairman Haroon Sharif observed that the budget is a clear reflection of Pakistan’s policy priorities, devoid of a medium or long term vision. The current budget is geared towards stabilization and social protection measures. Business interests dictate the drafting of budgets whose review process is poor and there is clear elite capture over budgetary approvals. The allocations made for social protection reflect the government’s intention to undertake ‘corporate social responsibility’ encouraged by IFIs, with no real plans to alleviate poverty or tackle issues that necessitate social safety or financial inclusion. The Benazir Income Support Program is known to assist poor households but should not be taken as a sufficient measure to address Pakistan’s rampant poverty. He stated that decision makers must consider the strategic opportunities for stabilization provided by CPEC and think of ways Pakistan can enable growth in key sectors with critical investments in human capital. It is essential that we conceive the kind of economy we want and develop competencies to achieve that objective.