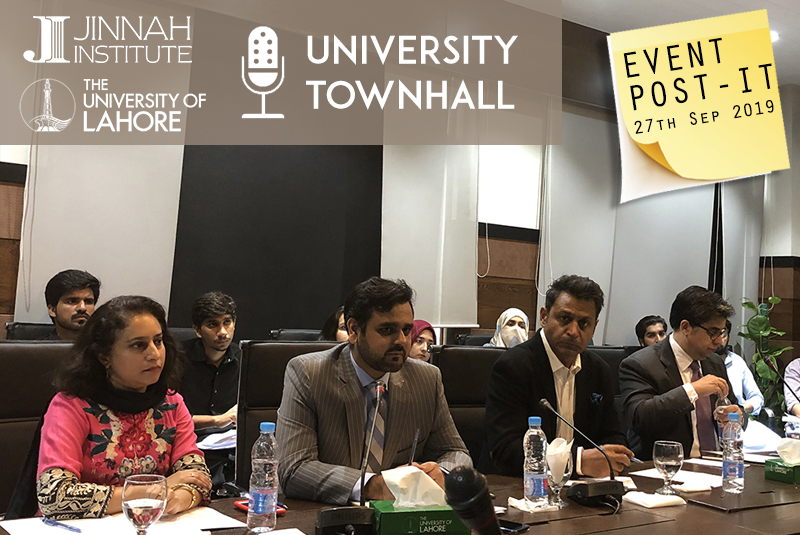 Changing Nature of State & its Relationship with Citizens

Jinnah Institute held a university townhall on 27th September 2019 with students and faculty members at the University of Lahore on the ‘Changing Nature of the State and its Relationship with Citizens’. Speakers at the event included veteran journalist and anchor Fahd Husain, prime time talk show anchor Munizae Jahangir, prominent lawyer and legal expert Feisal Naqvi. Salman Zaidi, Director Programs at Jinnah Institute moderated the discussion.

Munizae Jahangir gave her opening remarks by outlining the idea of the state, and the rights and responsibilities of citizens. She argued that there is a fair degree of vagueness in what the state appears to be, given its shifting priorities that frequently undermine fundamental freedoms. The ambiguity in the Pakistani state’s posture towards citizens arises from an unwillingness to subscribe to its own constitutional mandate and the international conventions it has ratified. One example is the unwillingness to define a child’s age at 18 years as per the UNCRC, which results in thousands of deaths of young girls every year through child marriage. Jahangir observed that state claims its citizens are all equal before the law, but the law is interpreted and meted out not on the basis of equality but political expedience. She suggested that citizens must find ways to agitate their demands from the state, particularly on its delivery of constitutional entitlements. There is a distinguished history of Pakistani citizens demanding their rights from the state, whose foremost reaction was brutality and use of force against them. What citizens articulate as their right will eventually find voice and representation on media.

Fahd Husain noted that the state and its relationship with citizens is well defined in the constitution, but paid scant attention to by those responsible for implementing it. There is a gap between promises made by the state to its people and the duties it successfully undertakes, resulting in a “do-say gap” that undermines the social contract. Ensuring fundamental rights is a duty of the state, not a favour, and if these rights are not given then the social contract is broken. He brought up the recent example of Rahim Yar Khan’s Salahuddin Ayubi, who died in police custody after extreme torture. What kind of state allows this in the name of law and order? He observed that the state often justifies policy brutality by listing the limitations it faces in terms of training, forensics and improved methods of investigation. The Pakistani state will not come forth and say how it will secure rights, but will justify why it cannot, he stated, adding that it is extremely difficult to bring about reforms to a state unwilling to admit its own complicity in undoing its constitution. He also added that engendering democratic ethics among citizens is just as important as making demands for rights, whereby citizens themselves uphold the law and bear responsibility for their actions. If developed countries present citizenship models to aspire for, then Pakistanis themselves have to adopt that course and find ways to get there.

Feisal Naqvi pointed out that the relationship between citizens and state has significantly evolved since the constitution was drafted. The rights promised in the 1973 Constitution outline ‘negative freedoms’, whereby protections from certain socio-economic and political ills are desired, such as freedom from poverty and tyranny. The expectations and demands of Pakistani citizens have changed over time to ask for positive freedoms, such as the right to education. The constitution has an error correction mechanism – the legislature – that allows new laws to be enacted, and respond to issues like child marriage. He emphasized that citizens must not look towards saviours in the judiciary or other institutions of the state to improve the quality of rights. Systems need to be reformed and repaired by citizens themselves, who have far more access to information now through the rise of social media, in addition to the means of demanding reform.

The session ended with a vote of thanks to the faculty and students of University of Lahore, who participated in the discussion and shared perspectives through questions and comments.

The event was part of Jinnah Institute’s town hall series under the Open Democracy Initiative, which brings Pakistan’s top experts to interact with youth on policy issues.