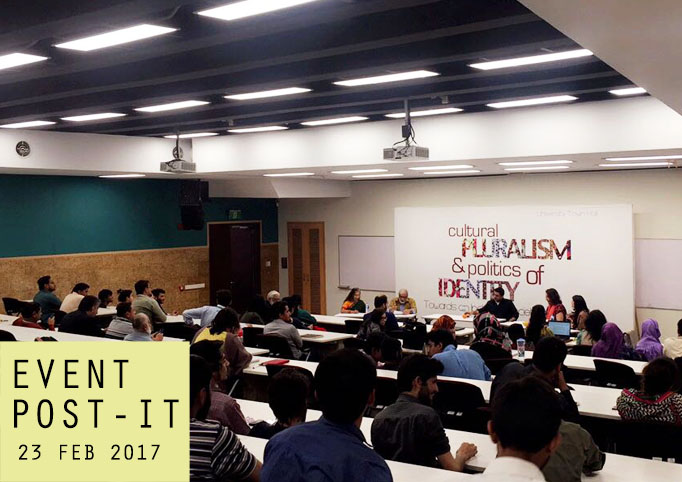 Cultural Pluralism & the Politics of Identity

On 23/02/17, Pakistan as a society must question the contemporary manifestations of ethnic discrimination, religious intolerance, and extremism by resuscitating the pluralistic vision of its inception.  This was the main focus of speakers at the university town hall on ‘Cultural Pluralism and the Politics of Identity’, held in Karachi on Thursday by Jinnah Institute and Habib University.

Starting the dialogue, Dr. Charles Amjad-Ali discussed the historical evolution of Pakistan’s societal structure, saying that we began as a hybrid, pluralist society in the post-colonial stage. He identified the impact of historical factors that have influenced Pakistan’s social challenges. By identifying different ethnic groups that have different ethos, Bina Shah furthered his comments by addressing the multiple identities that all Pakistani’s have, including gender, religion, and tribal. She indicated that while many advocate for unity as a means to reach an alternate vision for a pluralist society, there is also strength in diversity.

Sheema Kermani, founder of Tehrik-e-Niswan, discussed the link between cultural pluralism and heritage. While much of it is inherited, she focused on how individuals can also cultivate heritage. She noted that identities cannot be purely defined by religion, and such collective identities are not inherited, but have been created over the years. Farieha Aziz of BoloBhi further discussed the rise of divisive politics, where differences in ethnicity and religious affiliations are defined as being either right or wrong. She advocated for freedom of expression and religious beliefs as granted to citizens under Pakistan’s Constitution.

The policy dialogue was followed by an interactive Q and A session. Audience members discussed the State’s role in alienating ethnic groups through profiling, stereotyping, and implementing bans. Students questioned the protection of culture from radical change, the role that language plays in dividing or unifying communities, and how heritage can promote pluralism.