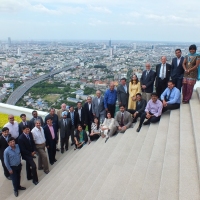 Bangkok, Thailand: Key opinion makers from India and Pakistan, including parliamentarians, former diplomats, military officers, and mediapersons and policy experts met in Bangkok for the 12th round of the Chaophraya Dialogue from 17 – 18 July 2013, organized by the Jinnah Institute (JI) and the Australia India Institute (AII).

The Chaophraya Dialogue is an Indo-Pak Track-II initiative jointly undertaken by the Jinnah Institute (JI) and Australia India Institute (AII) to encourage informed discussion of bilateral relations and enhance stakes in peace. The dialogue is primarily meant to give an opportunity to opinion makers from India and Pakistan to interact with each other on a sustained basis.

The Chaophraya Dialogue is credited with providing much- needed space for a non-official dialogue when the official dialogue process between India and Pakistan had frozen, following the 26/11 attacks in Mumbai. Since then, the Chaophraya Dialogue has brought together senior interlocutors from India and Pakistan together twelve times. The Dialogue encourages participants to share the conclusions of each round with their respective governments.

There was a consensus that India and Pakistan both need to build on emerging opportunities that could well provide space for sustained improvement in their bilateral relations.

Given that the completion of the electoral process in Pakistan has been marked by the commitment of the leadership of both countries to reinvigorating bilateral relations and building a climate of mutual trust and cooperation, it was noted that the electoral process in Pakistan was marked by a wide consensus to improve relations with neighboring India. The Prime Minister of India, Dr. Manmohan Singh, congratulated Mr. Nawaz Sharif on his electoral victory, and a Special Envoy, SatinderLambah, was sent to felicitate him even before he assumed office. Mr. Nawaz Sharif, in turn, sent a Special Envoy, Mr. Shahryar Khan, to reiterate his commitment to building a constructive and cooperative relationship with India.

This has revived interest in an early resumption of a fruitful dialogue process. In addition, there has been unprecedented interest in both countries and within the governments to expand economic cooperation in trade, investment, energy and other related areas.

Participants of the 12th Chaophraya Dialogue agreed upon the following:

• They agreed that the time is propitious to resume back-channel dialogue on issues mutually agreed upon, including Jammu and Kashmir;

• They recommended that functioning of the ministerial-level India-Pakistan Joint Commission created in 1983 be revived and that its working groups should meet regularly as envisaged;

• They urged that differences on any issue should not act as an impediment to people-to-people contacts and regretted that despite past efforts, visas for academics, journalists, students, artists and other sections of civil society were not being adequately and satisfactorily facilitated. This should be immediately addressed by the two governments;

• They noted that group tourism as envisaged in past agreements has not taken off and recommended that tourism to places of pilgrimage and tourist interest, including through designated private tourist operators, should be organised. In addition, they recommended that movement across the borders, through rail road and air should be facilitated and expanded at the earliest;

• They recognised that terrorism and extremism pose a grave threat to any democratic society and urged the two countries to devise specific measures to cooperate in fighting the scourge of terrorism in all its forms and manifestations;

• They recommended that procedures on trade and travel across the Line of Control be reviewed, which have been found to be restrictive and time-consuming in their implementation;

• They noted that a meeting between the Prime Ministers of India and Pakistan at the sidelines of the UN General Assembly would give an impetus to a productive dialogue on all issues of mutual interest;

• They recommended that periodic MoD to MoD dialogue must be held with adequate military representation;

• For more effective crisis management and stability, they recommended that the existing DGMO to DGMO direct hotline should be made more interactive and substantive. A similar system could be upgraded and extended to other services and higher officials;

• They recommended that threat perception issues and nuclear concerns should be discussed at the Track 1 level for greater clarity on respective positions;

• They recommended that the provision for allowing five journalists from each country under an existing bilateral agreement be pursued. Names should be nominated by media houses where required, and visas granted immediately;

• They recommended that multiple entry visas without city restrictions and exemptions from police reporting should be made available to the above, as well as other journalists from both countries;

• They recommended that the respective governments facilitate journalists to broaden their coverage to human interest stories pivoting on different aspects of society and culture;

• They recommended enhanced interaction between legislators at the national level and multiple level contacts be enhanced by increasing state/provincial level exchanges through reciprocal visits and issue-based collaborations on appropriate areas of governance;

• They urged the two governments to work together to create conditions for a summit meeting of the two Prime Ministers at an appropriate time and to explore the possibility of having them address each others’ parliaments;

• They recommended that both governments support think tanks and educational institutions in offering fellowships, scholarships and other research opportunities for students and scholars from the other country;

• They recommended that the scale of existing youth and students exchange and visit programmes be enhanced and facilitated;

• They encouraged increased collaboration between non-government human rights organisations and activists from both countries;

• They urged the two governments to treat civilian prisoners and detained fishermen in a humane manner. For this purpose, they recommended that oversight for their management be handed over to legally constituted National Human Rights Commissions;

• They urged that the two countries allow roaming cellular services and unhindered transmission of text messaging;

• They recommended that private airlines should start operating between the two countries as per the earlier bilateral agreement;

• They recognised that the transition in Afghanistan impacts the interests of both Pakistan and India, and urged both governments to urgently exchange views on the evolving situation in Afghanistan through appropriate mechanisms, in particular over the political, developmental and security situation;

• They recommended that Pakistan and India make constructive efforts towards an Afghan-led and Afghan-owned reconciliation process that should be inclusive and uphold the constitutional rights of all Afghans. They urged that women’s voices in particular be included in decision-making forums;

• Given that stability in Afghanistan is a necessary prerequisite for regional cooperation, they urged India and Pakistan to support Afghanistan in its quest for stability during the forthcoming period of transition;
• They recommended that the Afghan economy must be assisted in becoming self-sustaining by allowing greater connectivity throughout the region in terms of trade, energy and telecommunications, etc;
• They recommended that India and Pakistan should commit themselves to non-interference in the internal affairs of Afghanistan and Afghanistan’s soil should not be used for actions prejudicial to peace and security in any country; and

• They recommended that India and Pakistan should explore the possibility of undertaking joint projects in Afghanistan on IT, training and education, telecommunication, healthcare, agriculture, capacity building, etc.