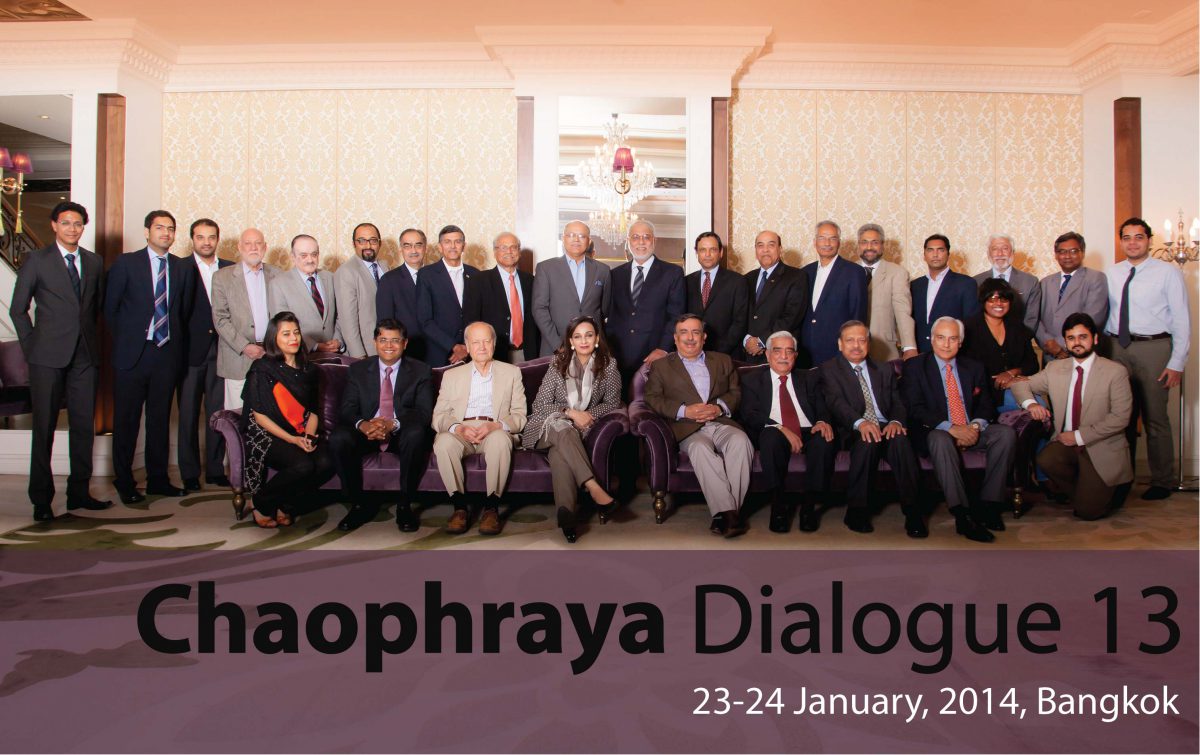 Bangkok, Thailand: Key opinion makers from India and Pakistan, including parliamentarians, former diplomats, officers of the armed forces, academics, mediapersons and policy experts met at Bangkok for the 13th round of the Chaophraya Dialogue from 23- 24 January, 2014.

The Chaophraya Dialogue is an India Pakistan Track-II initiative jointly undertaken by the Jinnah Institute (JI) and Australia India Institute (AII) to encourage informed discussion on bilateral relations and enhance stakes in peace. The dialogue is primarily meant to give an opportunity to members of the policy, media communities and other groups in India and Pakistan to interact with each other on a sustained basis.

The Chaophraya Dialogue is credited with providing a forum for Indo-Pak diplomacy when the official dialogue process between India and Pakistan had been stalled, following the 26/11 attacks in Mumbai. Ever since, the Chaophraya Dialogue has brought together senior interlocutors from India and Pakistan on several occasions.. The Dialogue encourages participants to share the conclusions of each round with their respective governments.

The 13thChaophraya Dialogue reviewed the state of bilateral relations, nuclear stability, the issue of Afghanistan and stabilization of the Line of Control. Participants agreed to the following statement, after two days of deliberation:

i. They noted that the Prime Ministers of India and Pakistan had met on the sidelines of the UN General Assembly after the 12thChaophraya dialogue in July 2013, and reiterated their commitment to stable and cooperative relations between the two countries. They urged that even as India holds a general election, contacts between the two countries should continue and intensify in 2014;

ii. They welcomed the recent DGMOs meeting and urged regular contact at the DGMO level as well as flag meetings along the LoC. They recommended that such meetings should be formalized in an agreement and encouraged military to military contact at the highest level;

iii. They welcomed recent decisions taken during the meetings of the commerce secretaries and commerce ministers, and hoped for an early normalization of trade relations between the two countries;

iv. They urged that the visa agreement of September 2012 be implemented in letter and spirit, while appreciating the announcement to grant visa on arrival for senior citizens and multiple entry visas for businessmen. They also urged the need for a liberalized visa regime for media persons, students and academics as well as easier visa facilities for citizens of the two countries. They hoped that restrictions on points of entry will be removed, allowing entry through all international airports;

v. They urged for all CBMs agreed so far between India and Pakistan to be fully implemented in letter and spirit;

vi. They recommended that efforts be made to establish a student exchange program with a view to developing greater understanding between the two countries;

vii. While expressing concern at the lack of connectivity between the two countries, participants recommended unhindered roaming cellular services as well as improved access for international airlines;

viii. They recommended that both India and Pakistan reaffirm their commitment to global nuclear disarmament as well as to the Nuclear Security Summit process;

ix. They recommended that new CBMs designed to promote overall strategic stability in South Asia should be explored and noted that the Lahore Declaration and MoU of 1999 provide the basis for pursuing further nuclear and conventional CBMs;

x. They recommended that efforts be made to mitigate a potential crisis through a process of constant engagement on nuclear issues;

xi. They recommended a bilateral dialogue to address each other’s strategic nuclear concerns;

xii. They recommended strengthening efforts at developing a common strategic lexicon between India and Pakistan;

xiii. They recommended that those areas of transparency in nuclear matters which can contribute to strategic stability be examined.

xiv. They urged that India Pakistan Expert Level Talks on Nuclear CBMs be held on a regular basis.

xv. They recommended a bilateral exchange of information on experiences and best practices with regard to nuclear safety and peaceful uses of nuclear energy, in addition to working modalities relating to the early notification of nuclear incidents.

xvi. They recommended the commencement of bilateral discussions that address the flight testing of cruise missiles as part of the existing pre-notification regime.

xvii. They urged the strengthening of secure communication for nuclear risk reduction.

xviii. They encouraged the interaction and cooperation of institutions dealing with nuclear emergency in India and Pakistan.

xix. They recognized that the interest of the region would best be served by a sovereign and stable Afghanistan at peace with itself and its neighbours.

xx. They urged greater consultation among Afghanistan’s neighbours for promoting stability and enhancing the country’s economic role in the region. They also welcomed indications that Pakistan and India could jointly bolster economic development in Afghanistan, recognizing that greater regional connectivity, in which Afghanistan has a key role to play, would contribute to stability in the region.