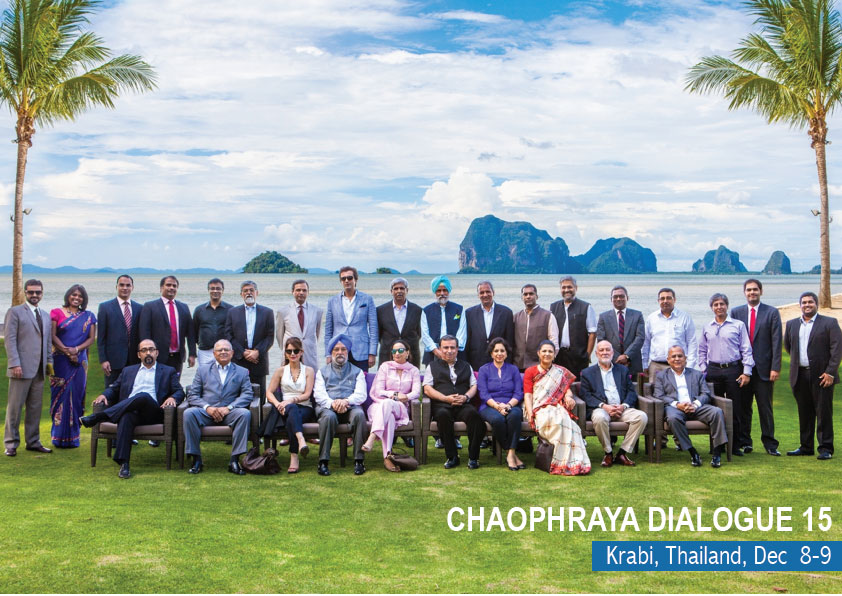 Krabi, Thailand: Key opinion makers from India and Pakistan, including parliamentarians, former diplomats, former military officers, mediapersons and policy experts met in Krabi, Thailand for the 15th round of the Chaophraya Dialogue from 8–9 December 2014, organised by the Jinnah Institute (JI) and the Australia India Institute (AII).

The Chaophraya Dialogue is the longest consistently running Indo-Pak Track-II jointly administered by the Jinnah Institute (JI) and Australia India Institute (AII) to encourage informed policy dialogue on Indo-Pak relations. The process is now in its sixth year and has so far led to 15 rounds of dialogue.

The 15th round of the Dialogue focused on recent bilateral developments, the issue of Jammu & Kashmir, tensions along the Line of Control and Working Boundary/International Border, terrorism and extremism, trade and development, and the future of Afghanistan. A special focus was given to and the role of Track II diplomacy as an instrument of conflict prevention and peacebuilding. Participants agreed to the following statement:

Bilateral Relations
They emphasized the importance of dispelling pessimism surrounding the prospects of India- Pakistan relations, inter alia by:

Taking effective steps to stabilise the situation on the LoC and WB/IB;

Resuming engagement at the official level so that bilateral dialogue on all issues, including Jammu &Kashmir, terrorism, trade, etc can be restarted at the earliest;

Addressing humanitarian issues such as that of prisoners and detained fishermen on both sides as a matter of priority;

Giving active consideration to a reset of Pakistan-India relations.

J&K, Violations across the LoC and WB/IB
Jammu and Kashmir was discussed at the dialogue. No common ground could be found on the issue at this juncture.

They expressed their concern at the increase in violence along the LoC and IB/WB, particularly at the loss of innocent civilian lives, and considered this to be detrimental to bilateral relations;

They reiterated the need for both governments to follow up by enforcing the existing cease-fire and restoring the non-violent nature of the border;
They emphasized that maintenance of peace along this line would not be possible without the resolute demonstration of political will on either side;

They recommended that two militaries should discuss modalities of strengthening the ceasefire including SOPs regarding its maintenance, and preventing recurrence;

They stressed, in the interest of transparency, the need for developing a mechanism for information-sharing on incidents along the border;

They recommended that the two sides work in good faith to negotiate the ceasefire into a formal agreement;

They called for more assured, secure, efficient and reliable means of communication at appropriate levels for the purpose of effective management of peaceful conditions.

Terrorism and Extremism
They urged that the perpetrators of 26/11 and Samjhauta Express and other incidents of terror be brought to early justice on both sides;

They recommended that both countries ensure that actions or statements inciting violence against a neighbour be disallowed;

They urged that India and Pakistan abide by past commitments not to allow their soil or use of any other territory to be used for an act of terrorism against the other;

They recommended that a mechanism more empowered than the JATM be devised;

Recognizing the common threat to South Asia from new transnational organizations like IS, Al Qaeda and their affiliates, they called for enhanced bilateral cooperation between intelligence and investigative agencies;

They recommended that the heads of intelligence agencies establish periodic contact with each other, so as to generate greater public confidence.

Trade and Development
They recommended commissioning a study that mathematically models welfare gains thatcan be yielded through normalization of bilateral trade between India and Pakistan;

They welcomed the recent SAARC agreement on Energy cooperation and looked forward to the finalization of agreements on rail and road transport as scheduled in the coming three months;

They welcomed Pakistan’s assumption of SAARC leadership for 2015 and looked forward to further SAARC level co-operation on trade and connectivity;

They observed that the preparatory work of granting NDMA and removal of NTBs should continue;

They proposed that the two countries co-operate on social policy issues that can benefit from a shared social and institutional environment as well as learning from each other’s experiences. In this regard, it was suggested that exchangingparliamentary delegation should be initiated;

They welcomed the announcement of the SAARC business traveller card by India and encouraged all SAARC members to do the same. Furthermore, to facilitate trade and connectivity, mobile phone roaming in either country should be allowed.

The Future of Afghanistan
They complimented the leadership in Afghanistan for showing sagacity and wisdom in forming a national unity government, and expressed the hope that the same spirit of consensus would be applied to governance and development;

They welcomed the continued engagement of the international community with Afghanistan and hoped that this would be sustained over the medium to long term;

They welcomed the Afghan government’s reiteration of its commitment to the reconciliation process;

They recommended that India and Pakistan should engage in order to support peace, stability and economic development in Afghanistan;

They recommended that India and Pakistan should consider joint projects on agriculture, education, health, infrastructure development and connectivity;

They recommended that appropriate conditions should be created in Afghanistan for the refugees in Pakistan to be repatriated and resettled;

They expressed concern over the growth of poppy cultivation and drug trafficking, and called upon their governments to intensify their cooperation to control this menace.