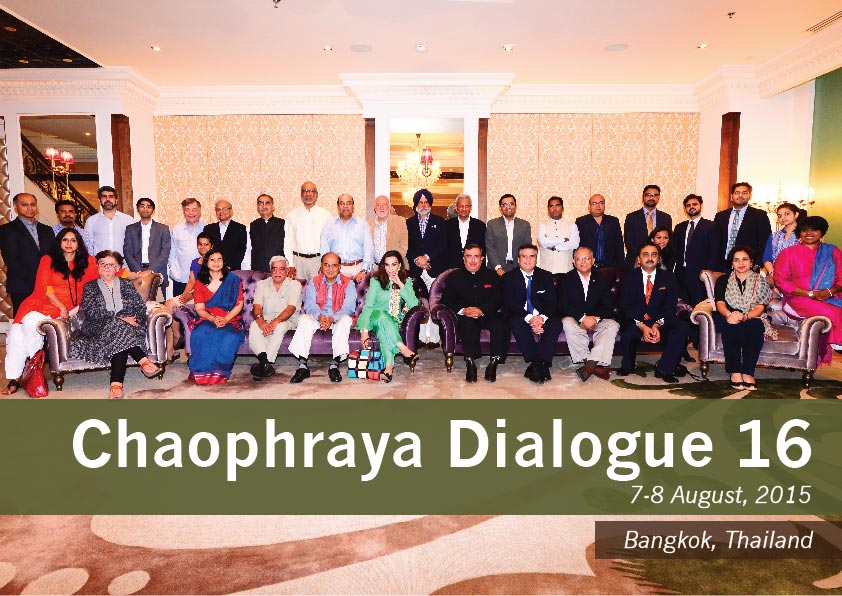 Bangkok, Thailand: Senior interlocutors from India and Pakistan met in Thailand for the 16th Chaophraya Dialogue and discussed issues of mutual concern and interest. At the end of the two-day dialogue, participants arrived at the following joint resolution.

Bilateral Relations
They welcomed the Ufa meeting and the resumption of bilateral engagement, and expressed the hope that the forthcoming meetings would be positive and productive, leading to a fuller engagement on matters related to cooperation and the resolution of all outstanding issues;

They also welcomed the fact that the Indian Prime Minister has accepted Pakistan Prime Minister’s invitation to participate in the forthcoming SAARC summit in Islamabad;

They emphasised the need to sustain the ceasefire along the LoC and IB/WB and hoped that meetings between the NSAs, DGMOs, DG BSF and DG Pakistan Rangers would eliminate ceasefire violations and contribute towards maintenance of peace and security;

They called upon the two governments to enhance people to people contacts in cultural, educational, scientific and other areas;

They emphasised the importance of carrying out more research and consultations on important issues such as energy, trade and climate change.

Terrorism
They welcomed the Joint Statement issued after the PMs meeting at Ufa, which conveys an agreement to cooperate with each other in eliminating terrorism from South Asia. The proposal for a meeting of the NSAs to settle their respective concerns through dialogue was also welcomed;

They hoped that the planned meeting of the NSAs would be successful and help establish permanent mechanisms that deal with terrorism, so that bilateral discussions on all outstanding issues are not interrupted by incidents which disrupt the dialogue process;

They recommended that these mechanisms could include, among others, progressively higher levels of bilateral contact between officials dealing with intelligence; law and order; and counterterrorism. In particular,the lack of a quick and ready exchange of intelligence was felt, which can be useful in preventing terrorist acts and punishing perpetrators;

They recognized evolving threats in the region that are acquiring a transnational character, such as new groups like Daesh/ISIS, which highlight the need for cooperation, ideally among all SAARC members;

They encouraged both sides to cooperate on capacity building of law-enforcement agencies, share best practices, and consider if some of these initiatives could be taken up at the SAARC level;

They encouraged the two sides to enter into a Mutual Legal Assistance Treaty (MLAT) in criminal matters based on a model treaty available with SAARC;

They recognized as a general principle that the best defence against radicalization is a robust civil society, rule of law, and moderate public discourse.

Afghanistan
The reiterated their strong support for peace and stability in Afghanistan and urged their governments to independently and jointly promote these shared objectives, wherever possible;

They expressed support for the ongoing peace and reconciliation efforts and emphasized that these should remain Afghan-led and Afghan-owned, receiving support from all external and internal stakeholders;

At this moment of critical transition in Afghanistan, they urged support from regional and international actors to strengthen the National Unity Government and enhance the level of economic assistance provided to Afghanistan;

They welcomed the National Unity Government’s enhanced efforts to protect human rights and advance the participation of women in all spheres of life in Afghanistan;

They expressed grave concern at the increasing presence of the Daesh/ISIS in Afghanistan and the region. Recognizing this as a common threat, they called upon all agencies of India, Pakistan and Afghanistan and other countries of the region to coordinate efforts, including intelligence sharing, joint plans and assistance to concerned Afghan agencies to counter this threat;

Task Force: Alternative Narratives and Histories
They welcomed the widening of the Chaophraya dialogue to include alternate histories and narratives, which will help promote a better, informed and nuanced mutual understanding.

Task Force: Climate Change
They agreed that the multifaceted challenges of climate change on economies and communities in India and Pakistan warranted cooperation and concerted action by their governments in promoting a comprehensive and just global agreement at the forthcoming climate conference in Paris. They felt that this would reduce the negative effect of global warming and climate variability on developing countries including their own;

They recommended that information and best practices should be shared between India and Pakistan on all relevant issues related to the prudent management of ground water in each country. They also emphasized the need for jointly seeking information from China and Afghanistan on glaciers feeding the Indus Basin; and

They recommended that SAARC countries convene a meeting at the appropriate level to evolve coordinated positions at the Paris Summit Conference.