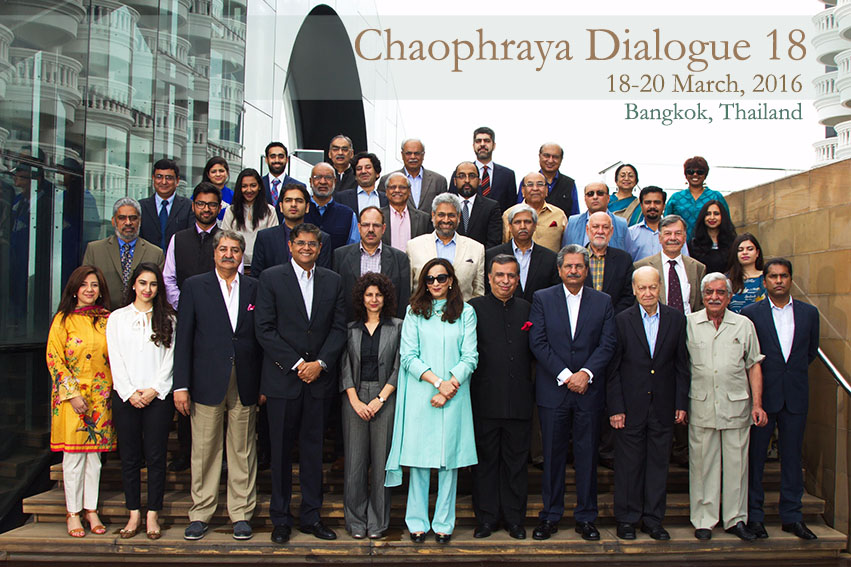 Bangkok, Thailand: Senior interlocutors from India and Pakistan met in Bangkok for the 18th round of the Chaophraya Dialogue from March 18-20, 2016 to discuss the state of bilateral relations, the issue of Jammu and Kashmir, terrorism and extremism, bilateral connectivity, the conflict in Afghanistan, and the shared challenge of climate change. At the end of the two-and-a-half day dialogue, participants arrived at the following joint communiqué.

Bilateral Relations
They noted with satisfaction the recent meeting between the two Prime Ministers in Lahore, and expressed the hope that this would lead to revival of a robust bilateral relationship. The forthcoming Nuclear Security Summit in Washington D.C. provides another opportunity for the two Prime Ministers to meet again.

The recent meeting between the Indian External Affairs Minister and the Pakistani Advisor to the Prime Minister on Foreign Affairs in Nepal is also a welcome step towards regular interaction between the two countries.

The forthcoming SAARC Summit in Pakistan should be used as an important platform for the leadership of the two countries to look at ways and means to give impetus to the bilateral dialogue process.

Jammu & Kashmir
They recalled that discussions had taken place in recent years to agree on a framework to resolve the issue of Jammu and Kashmir, and urged that this process be taken forward.

They stressed the need to devise procedures to facilitate transportation, trade, travel and tourism across the LoC. This had to be accompanied by the development of infrastructure, banking facilities and communication to promote such cooperation.

They recognised that the provision of such facilities across the LoC would create an atmosphere for peace, progress and prosperity for the people of Jammu and Kashmir.

Terrorism
They noted the mature and constructive response of the governments of India and Pakistan to the Pathankot terrorist attack of 02/01/16;

They welcomed the First Information Report (FIR) filed in Pakistan, the detention of some of those believed to be responsible, the formation of the Joint Investigation Team (JIT) in Pakistan, and the announcement that the team will be arriving in India on 27/03/16;

They urged both governments to facilitate the successful process of investigation and trial;

They hoped that both sides could build on the positive momentum witnessed post-Pathankot, and continue to cooperate to counter the common threat posed by terrorism;

They welcomed the fact that the two National Security Advisors (NSAs) were actively engaged with each other on the issue of terrorism, and hoped that this could translate into tangible intelligence sharing in the future;

They took note of the challenges that violent extremism presents on both sides of the border and urged the two governments to find ways of tackling this menace.

Afghanistan
They reiterated their strong support for peace and stability in Afghanistan, and expressed their support for reconciliation efforts in this regard. They urged their governments to independently and jointly promote these shared objectives;

They urged support from regional and international actors to strengthen the National Unity Government and enhance the level of economic assistance provided to Afghanistan;

They underscored the importance of economic development in Afghanistan, and the role Afghanistan can play as a hub for trade, energy and communication corridors between Central and South Asia. In this context they welcomed the signing of the TAPI and CASA-1000 projects.;

They suggested that India and Pakistan consider the possibility of discussions on Afghanistan as part of their bilateral discussions;
They lauded the efforts of the Afghan government to combat extremist militancy in the country;

Phones, Flights & Connectivity
They noted with concern that although there is dramatic connectivity unfolding across the globe South Asia remains one of the least connected regions in the world;

They recognised that both governments have already negotiated roadmaps on trade, visa liberalisation and connectivity between the two countries;

They urged both governments to respond to the popular aspirations of the people on trade and increased connectivity, bilaterally and regionally, and consider taking the following steps:

b. Implement previously negotiated roadmaps on Visa liberalisation and tourism;

c. Additionally, develop a database of pre cleared, pre verified citizens for ease of visa issuance and travel across borders;

d. Create a roster of authorised travel agents that can facilitate religious tourism;

They recommended facilitation of student exchange programs between centers of learning on both sides. They specifically suggested the following:

They emphasised the importance of leveraging new technologies to establish greater people to people contact. They specifically suggested the following:

i. Media practitioners on both sides of the border should collaborate to set up a jointly run South Asia news and opinion portal.

j. Use social media to connect civil society groups to jointly campaign for common issues such as gender issues.

Climate Change
They urged both governments to include climate change in their bilateral discussions.

They urged both sides to enter into cooperation and collaboration to undertake scientifically credible joint studies on common climate change concerns.

They recommended that key water issues be addressed, namely surface and groundwater; agriculture and food security; cryosphere; the water-energy nexus; and protection and preservation of the habitat of species of wildlife, especially the snow leopard.

They called for improvements in the network of observatory stations on hydrology, metrology and groundwater to develop a mechanism for timely sharing of data among the stakeholders.

They urged both countries to strengthen the effective implementation of SAARC commitments on climate change, especially the decisions taken in the 16th SAARC summit in Thimpu.