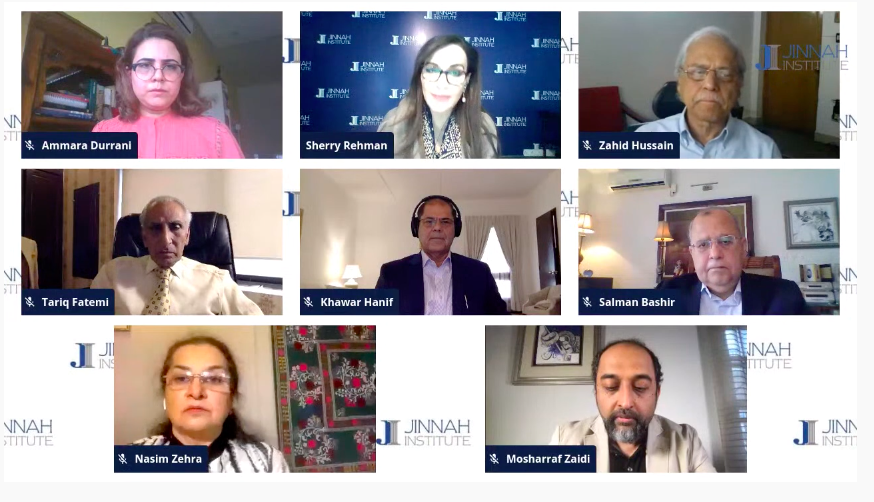 China’s Inclusion into the Kashmir Conflict

India’s unilateral action in Kashmir triggered the Ladakh standoff on August 5, with China now becoming the fourth party to this decades-old conflict, and the disputed region continuing to be the converging point for all stakeholders, stated Senator Sherry Rehman at Jinnah Institute’s online webinar on the ‘State of Pakistan-India Relations and Strategic Stability in South Asia.

The online event was part of Jinnah Institute’s Strategic Security programme, which seeks to build a knowledge base around Pakistan’s key strategic imperatives, in addition to striving for stability in South Asia. Jinnah Institute also leads the longest, consistently running Indo-Pak Track 2; the Chao Track.

Chairing the session, Senator Rehman stated that Indian posturing leaves little room for Pakistan to be unresponsive, and strategic thinkers must urgently review the tactical advantages that have accrued in Pakistan’s favour over recent months. China’s strategic gain over India in Ladakh, and its increasing dominance of the Indian Ocean should be leveraged by Pakistan. The emergence of multi-polarities may create confusion, but Pakistan must avoid falling into the trap of supporting binaries and continue to work for stability in the region. This is a moment for geo-economics and the dots must connect between Pakistan’s rhetoric and action, she stated.

The participants noted that Kashmir means different things to the conflicting parties; Pakistan is looking to safeguard the people while India’s focus is on territory. With Kashmir as a key trigger for Ladakh, the Chinese have acted with typical restraint in this episode and sent a clear message to New Delhi to act likewise. India however, has suffered huge reputational damage, and its isolation is evident in South Asia. Meanwhile, the new Cold War rhetoric emanating from the West regarding China wilfully ignores the weaknesses in Western economies and their receding geo-economic power. China’s Belt-Road Initiative (BRI) is an inclusive global project that Western economies cannot match, and Pakistan should try to maximise its integration within this.

While international commentators have spoken about new strategic alignments akin to the Cold War, participants observed that China’s commercial exchange with large economies must be taken into consideration. Even in the case of India, 70% exports go from China to India and 30% from India to China. The US may actively be containing China’s dominance in the South China Sea, but the quantum of trade between China and its strategic competitors will determine who wins the contest and how. This is why countries would do well to consider multilateralism as the way forward and not overestimate their capacity to win conflicts through border skirmishes.

Participants observed that the Ladakh encounter was a calculated move by China. Resultantly, while there is no popular resentment of India in China, public opinion in India has been stoked against China by a compliant media that cannot afford to question or undercut the strongman image of PM Modi. Ladakh has been a humiliating episode for the Indians, and PM Modi has felt the heat for the first time since assuming power.

The role of Russia as the moderator in this issue was also observed. The participants noted that the Russians recognise their status as an Asian power all too well, and will do everything to preserve this, from safeguarding their $400bn economic investments with China, to cultivating their longstanding political relationship with India.