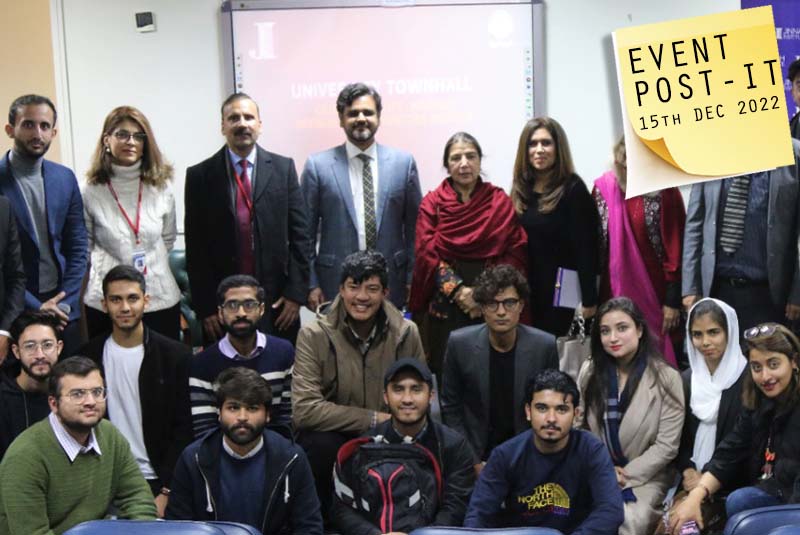 What is the intersection between the science and sociology of climate change, and why is it important to understand? Why has equity emerged as the top question in debates on climate action? More importantly, why have other vulnerable countries managed this crisis better than Pakistan has? Jinnah Institute organised a University Town Hall in collaboration with Bahria University (Islamabad) titled ‘Climate Equity: Making Invisible Communities Matter’ to discuss these themes with an eminent panel of experts including environmental journalist Afia Salam, leftist politician Ismat Shahjahan, and anchorperson Tanzeela Mazhar. The session was moderated by Jinnah Institute’s Director Programs, Salman Zaidi.

Afia Salam explained that the scientific basis of global warming was established decades ago, but its deleterious impact across the globe, especially upon communities with no contribution to climate degradation, was confessed rather late by major emitters. After toiling for 27 years, developing countries have convinced the Global North that their relentless industrial growth is costing lives and livelihoods in the poorest regions of the world, and a Loss & Damage mechanism has been created at the COP forum in acknowledgment of this asymmetry. The concept of climate inequity is finally gaining traction within Pakistan as well, because the recent superfloods have proven how the vulnerable are left to confront climate crises with no safeguards, and become invisible to those situated at a safe distance from the catastrophe. This deep set indifference towards the marginalised needs to be overcome, and this is the hope from Pakistan’s young people, she said.

Ismat Shahjahan stated that Pakistan’s class-system is deeply rooted in social and political injustice, and makes the working class invisible. The climate crisis is a product of the exploitative history of consumerism and capitalism; systems chosen by affluent classes at the expense of blue-collar workers. In Pakistan, the remnants of colonial governance still thrive within our state machinery, and combined with the elite capture over resources, it has exacerbated social inequities and injustices. Where the majority of our national budget is devoted to non-development expenditure to date, it is only natural that Pakistan’s people will be dispossessed from their rightful entitlements. “Pakistan may well be seen as the freest colonial federation in the world,” she observed, adding that three deliberate steps need to be taken to address our challenges: decolonise, demilitarise, and decarbonise.

Tanzeela Mazhar observed that there are glaring differentials between the poor and powerful accessing justice in Pakistan. The climate equity and justice debate provides a useful arena to demonstrate how socio-political privilege is skewed towards certain groups, to the detriment of all others. There are certain groups who cannot even claim their rightful share of citizenship, such as religious minorities, because of the State encouraging discrimination. It is also perceived to be perfectly normal to have certain groups carry a heavier burden than the rest, such as women performing caregiving roles for their household and community, although the same work for their male family members would be viewed as a favour. She stated that social prejudice is deeply embedded in our culture, but it must be called out and corrected. “We cannot sit back and say society will find its balance through the process of evolution. Pakistani media is the best example of evolution gone wrong, if not interrupted through meaningful course corrections,” she stated.