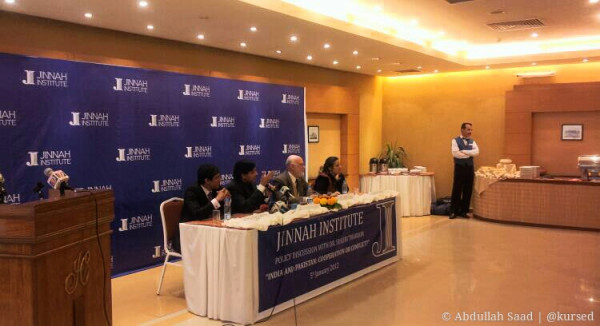 ISLAMABAD, 5th January, 2012: India is genuinely committed to peaceful relations with Pakistan, which is why Prime Minister Manmohan Singh has embarked on yet another round of peace talks, Dr. Shashi Tharoor, Member of Lok Sabha and former Indian Minister of State for External Affairs, said here at the Islamabad Club today. Dr. Tharoor was speaking at a policy discussion seminar titled “India and Pakistan: Cooperation or Conflict?” organised by the Jinnah Institute.Tharoor said that Pakistan defines itself in opposition to India, and while this has coloured India’s perception of bilateral issues, cooperation is the only way forward. He asserted that Pakistanis interested in peace and regional security will find willing partners in India.

Tharoor, who was the United Nations’ Under-Secretary General for Communications and Public Information from 1996 to 2007, and currently represents the constituency of Thiruvananthapuram in the Lok Sabha, argued that terrorists are able to use the instruments of globalisation to drive India and Pakistan apart. “Previously benign forces of religion and culture have become causes of conflict,” he said. Tharoor welcomed the fact that President Zardari has been pushing for trade links with India, because it reflects how important it is for Islamabad to normalise with New Delhi. However, he said that initiatives by Pakistan’s civilian governments are unlikely to take off because of the strategic view of the Pakistani military.

Tharoor is the first among the Jinnah Institute’s Distinguished Speakers, as part of JI’s ongoing Indo-Pakistan Track-II engagement termed the Chaophraya Dialogue. JI has partnered with the Australia India Institute (AII) for the Chaophraya Dialogue and plans multiple interactions between policy experts and audiences on both sides of the border. Among future invitees of the Distinguished Speaker Series are Mr. Mani Shankar Aiyer (former Union Minister of Petroleum, Youth Affairs and Panchayati Raj, and author of several books including ‘Remembering Rajiv’ and ‘Pakistan Papers’) and Prof. Najib Jung (Vice Chancellor Jamia Millia Islamia Delhi and a former bureaucrat).

Tharoor’s talk was preceded by opening remarks made by Mr. Aziz Ahmed Khan, Honorary Vice President Jinnah Institute and former Ambassador, who stressed that it is possible to promote a better understanding between Pakistan and India through the dialogue process. Khan commended the Track-II initiatives in trying to improve the environment between India and Pakistan and emphasised the need to move forward in the spirit of Thimpu and Mohali.

Mr. Ejaz Haider, Executive Director of Jinnah Institute, said that focusing simply on Pakistan’s actions and reactions was likely to miss the point. He argued that India and Pakistan have been locked in a conflictual paradigm and one needs to understand the dialectics of the relationship to get the full picture on Indo-Pak relations. Ms. Nasim Zehra, Director Current Affairs Dunya TV, expressed her dissatisfaction with Tharoor’s narrative and said that any move forward must not be based on fiction or finger-pointing. In terms of the MFN, Ms. Zehra said that the apparent large-heartedness of India is contradicted by reports that refer to India’s non-tarriff barriers being the primary discouragement to bilateral trade. “It is very important that we have a candid dialogue between us,” she said.

The Jinnah Institute is an Islamabad-based public policy think-tank that leads two institutionalised Track II processes between India and Pakistan. Jinnah Institute was conceptualised and set up by Sherry Rehman in 2010. Ms. Rehman has been designated as Pakistan’s ambassador to the US.

Appeared in the following newspapers: