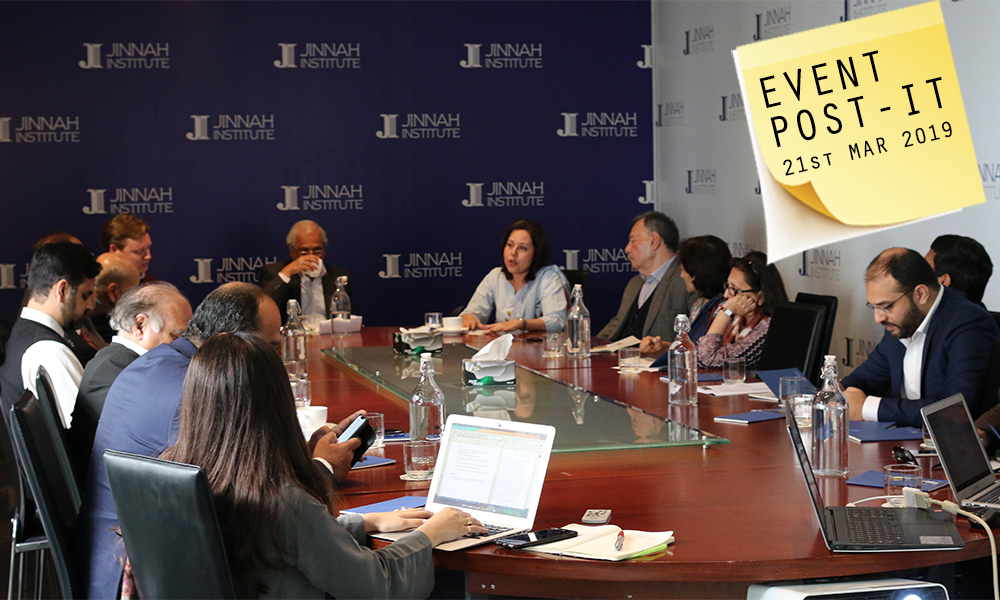 CPEC and the BRI

The Jinnah Institute in collaboration with the Mahbub ul Haq Research Center at LUMS, held a roundtable on CPEC and the greater BRI, inviting senior economists, academics and policymakers to discuss the contours of BRI and the centrality of CPEC in Pakistan’s economic growth prospects.

In his opening remarks, Zahid Hussain, author and Jinnah Institute senior fellow, discussed how a resurgent China was exercising power and its investments under BRI and CPEC were reflective of Xi Jingping’s philosophy of a new and globally invested China.

Dr Ivan Rasmussen presented the key drivers behind China’s outward reach, arguing that the origins of BRI can be found more saliently in its domestic compulsions rather than foreign policy motivations. He cited the expected end of China’s demographic dividend as the reason for this shift to a new economic model, that moves its focus away from Shanghai and the coastal areas, and towards places with a youth bulge and large workforce. He also elaborated on the place that CPEC occupies in the larger BRI imaginary.

The presentation was followed by opening remarks by economist Nazish Afraz who suggested ways in which Pakistan could benefit from CPEC. It is important, she said, that CPEC be engaged with as an economic rather than a transit corridor. She presented a rough blueprint for Pakistan to make use of CPEC and provided three recommendations. The first was to ensure complementary public investments, especially in Pakistan’s labor force so that it is competitive enough to work with Chinese firms and capable of making Pakistani industries internationally competitive. She added that different clusters have to be connected so that people can mobilize inputs and outputs.

Afraz’s second recommendation was to create a business environment conducive to trade and investment in Pakistan. She emphasized that a good business environment was one of the top five indicators for investors; this includes a regulatory system that works, licenses and commissions that are easy and efficient to obtain, and policy stability. Pakistan needs to strengthen all three so that CPEC can attract Chinese, and other firms that are willing to invest in Pakistan, something that will reap long term benefits for the country. She added that if tax breaks are to be offered to Chinese firms, these must be conditioned on investments in and outsourcing to Pakistani SMEs

The third recommendation was to enhance the information environment in which economic policy and businesses operate. It was emphasized that accurate data is essential for effective policy making. Pakistan has no information on the current state of its firms. By not knowing what businesses are like today, policy makers are not equipped to help businesses grow. Afraz ended her intervention with an apt warning that while CPEC has immense potential of being a game changer for Pakistan, we have to work hard to ensure that Pakistan does not become a dumping ground for inefficient power plants and failed businesses.

Following this, most participants brought forward the issue of transparency within CPEC projects. A discussion ensued on the lack of clarity that policymakers and the public has on the terms on which deals are being signed, and benefits being accrued by Pakistan. Equally unclear was whether the energy plants being set up under CPEC were environmentally friendly or not; an important concern for a country with rapidly worsening air and water quality. A participant added that only through transparency and sharing of information can the government ensure greater confidence in CPEC projects. Conspiracy theories will only undermine the project, and make even many who are willing to invest reluctant to do so.

Mosharraf Zaidi countered the claims of ad-hocism surrounding CPEC projects saying that all public spending has gone through the planning commission, but it was agreed that better ways to make this information accessible to the public must be ensured. Additionally, it was discussed that the gaps between those making the policies, those implementing it, and those creating the narrative about the project should also be filled so that accurate information can be revealed and informed opinions and policies be formed.

Dr. Aliya Khan, senior economist and member of the Economic Advisory Council revealed that contrary to public perceptions, investments in Pakistani labor are already being made, but by the Chinese. A training program in partnership with a technical university in China has been initiated in Thar, and other investments in human capital are already being made in pockets. Dr. Khan said that the Chinese have already begun skill training and Pakistan must also pick up pace. She added that currently, there are no non-government personnel in the government to government Joint Working Groups under CPEC, and this must be changed to include Pakistani academics and policymakers.