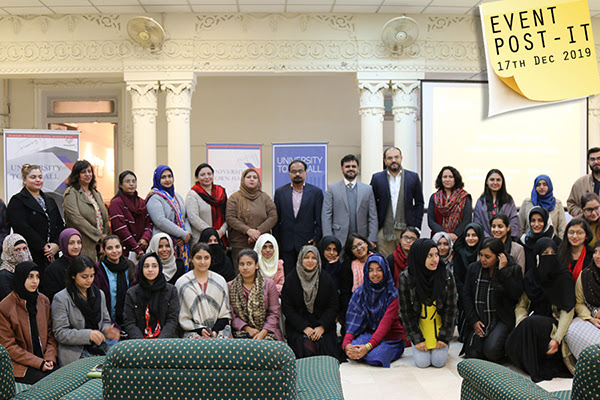 “The purpose of political culture is to create an inclusive environment conducive to the participation of all kinds of people; much of democratic continuity rests on this,” said linguist and professor Dr. Ali Kumail Qazalbash at Jinnah Institute’s townhall titled Cultural Expression and Political Identity. The townhall was held at Fatima Jinnah Women’s University, Rawalpindi and was attended by 200 students.

Political debate is also made more meaningful through investments in indigenous culture that have traditional mechanisms for reconciliation, he stated. Cultures are not inherently good or bad; but the adoption of inauthentic practices corrode traditional values, create stress, and prove regressive for identity formation. There have been forced attempts to create an artificial Islamist culture in Pakistan; these exercises compounded the ideological confusion among people, but did not fundamentally alter traditional culture. Whereas scientific and technological innovations can be ‘imported’, culture cannot assumed to be an import commodity that will change according to political preferences. He warned that cultural preservation is important, but should not be carried out at the expense of cultural diversity, folk heritage, or access to global cultural products. He also noted that culture is ever-evolving; forcing it to remain static and unchanging will result in its eventual extinction, be it a language, dress, cuisine, or any other cultural element.

Much of the rejection that Pakistan’s local languages and culture have experienced can be traced back to the age of colonialism where Enlightenment thinkers wrote off non-Western cultures as inferior and regressive. Hassan Akbar, policy specialist and Director Strategic Security Initiative at Jinnah Institute, discussed the history of the Indian sub-continent and pointed out that politics has a duty to accommodate and provide patronage to different cultures. Even a cursory glance at Pakistan’s origins reflects a strong connection with Muslim culture. Drawing on historical developments, he argued that Pakistan’s dismemberment in 1971 was based on cultural faultiness, whereby the identity and practices of citizens in East Pakistan were undermined and created popular resentment among them. Fifty years on, contemporary political culture in Pakistan shows every sign of intolerance and extremism. The use of social media has created isolated echo chambers that are known to strengthen people’s biases, subvert dialogue and tolerance for differing points of view. The revival of student unions is a positive step in the creation of a much needed enrichment of political discourse, but Hassan Akbar noted the likely risk of campus students being exploited by political parties.

This was followed by an interactive session where students asked the panelists questions and presented their viewpoints on the subject. The townhall concluded with a vote of thanks to the organisers and an informal networking session of students with panelists.