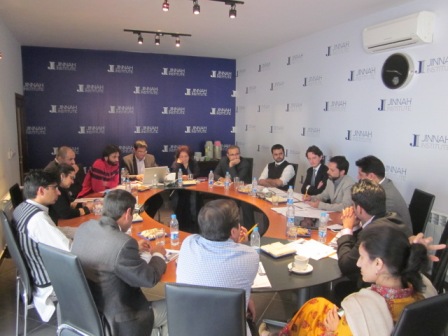 ISLAMABAD: February 20, 2013 – Participants of a dialogue on “Demilitarizing the LOC: Challenges and Opportunities” organized by The Jinnah Institute here on Wednesday urged both Pakistan and India to explore pragmatic policy options in the pursuit of securing a lasting peace in the region. A holistic approach is required to normalize relations and there is limited chance of building peace if sources of conflict are left unattended, participants said.

Nasim Zehra, Director Current Affairs Dunya TV, pointed out the influence of the Indian security establishment on India’s foreign policy and added that Pakistan has made all possible efforts to mainstream the issue of Kashmir. Calling for exploring alternate policy options, she said that the momentum made through peace activism should not be lost.

Yasin Malik of Hurriat Conference termed the idea of demilitarizing LOC a romantic concept and emphasized the need for sustained efforts in resolving the conflict going on in Kashmir without which confidence building will yield limited results. He said that Track 2 level efforts needed to do much more to resolve the Kashmir issue.

Kashmir issue and all they want is trade-oriented continued cooperation. “India doesn’t want to see water or endgame in Afghanistan on the table. Whenever we try to bring in the Kashmir issue in our dialogue, our counterparts quick jump to terrorism related concerns thus deflecting the focus away from the real issue,” he said, adding that demilitarizing LOC was a distant dream.

Terming demilitarization of LOC as a far fetched reality, Riffat Masood, Director General South Asia of Foreign Office, spoke about the growing role of Indian military in formulating foreign policy particularly towards Pakistan. Urging better relations with India, she emphasized the need for ‘addendums’ to negotiations with India and cautioned that sight of the core issue must not be lost. She further noted that Kashmir reflects the reality of Indo-Pak relations.

Gen Athar Abbas, former DG ISPR said that ultimate victory lies in winning peace in the region. “If anything, the nature of relations

with India is such that a single trigger happy soldier can bring on a serious crisis and recent developments around LoC are worrisome for their implications on the ongoing peace process,” he said, adding that atmospherics  will not do anything substantive.

Wajahat Ali, visiting scholar from US said that localized extremist acts have their implications internationally. Islamophobia is growing in the west, he added.

Earlier, Laurent Gayer, visiting French scholar shared his thoughts on the issue of extremism drawing a comparison between the cities of Mumbai and Karachi. Touching upon various factors that result in violence in Karachi, he said that State should be less brutal and more neutral in handling the crisis. In his research, the case studies of MQM and Shiv Sena show that violence has become integral to party politics in India and Pakistan. Talking about the TTP phenomenon in Karachi, he said that a lot of Taliban are products of secular academic institutions spread across Karachi.