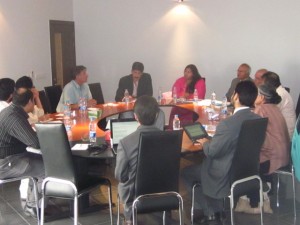 Devolution of HEC should take place after an informed policy debate

Islamabad, April 20, 2012: Two years after the passage of 18th Amendment to the Constitution, the Higher Education Commission (HEC) is yet to be devolved. There is little clarity on the sequencing of its devolution to the provinces; and how such a transition will be managed needs to be seen, concluded experts at a roundtable organized by the Jinnah Institute.

They were discussing devolution and the future of the HEC, as part of Jinnah Institute’s Open Democracy Initiative. In his opening remarks, Raza Rumi, Sr. Policy Adviser JI said that devolution presented new opportunities and challenges; however the Pakistani state was not deft at change management. HEC’s devolution hinged on the political economy of devolution; and required informed policy debates and consensus building.

Dr. Sohail Naqvi, executive director HEC stated that the devolution of the HEC needed to be planned carefully. He informed that this process involved a transfer of resources worth 48 billion rupees and there were lessons that could be drawn from other countries where devolution had taken place. A high-powered cabinet committee was deliberating this issue and examining various options.

Dr. Pervez Hoodbhoy, a senior academic and activist, said that there were many advantages of federally regulated higher education, such as overseas scholarships, digital libraries and ‘economies of of scale’. He added that the existence of HEC was not disputed but how such a body functioned was the real question. Hoodbhoy remarked that the HEC model currently in place incentivized corruption, whereby mass production of poor quality research papers was a proof of an academic’s merit. The granting of university charters did not take into account the quality of research, teaching or learning.

Responding to the concern voiced by Dr. Hoodbhoy, Dr Naqvi observed that HEC has been able to improve the amount of research within the higher education sector in Pakistan, and approximately 6,200 research papers have been published in international journals in recent years. In addition, greater numbers of Pakistani graduate students are admitted in top ranking foreign universities. He felt that in the event of a complete dissolution of the HEC, there will be no alternate mechanism to provide deserving Pakistani students the opportunity to undertake higher studies at institutions abroad.

Civil society activist, Tahira Abdullah said HEC’s devolution must not be done in haste. At the same time, she added, that HEC’s current way of functioning was untenable and the standard of research and fieldwork in higher education institutions were disappointing. The responsibilities for regulation, monitoring and supervision of higher education standards should be clearly stipulated. She also raised the question if anyone in the government was even concerned with the state of tertiary education.

Zafarullah Khan of Center for Civic Education said that quality standards of higher education cannot be lost, but a proper federal institutional framework must be agreed upon. The 18th Amendment, protects provides for federal jurisdiction over certain aspects of higher education but a centre-province agreement was required to ascertain the scope of devolution. He added that the provinces need to build capacity to manage a decentralized higher education system.

Masood Kizilbash, adviser UNDP said that the 18th Amendment is clear about institutions of higher education and research. The Supreme Court of Pakistan also ruled that the federal government administers all policy aspects of higher education in Pakistan. Marvi Sirmed concluded the discussions saying that HEC devolution required more public input into the policy process.