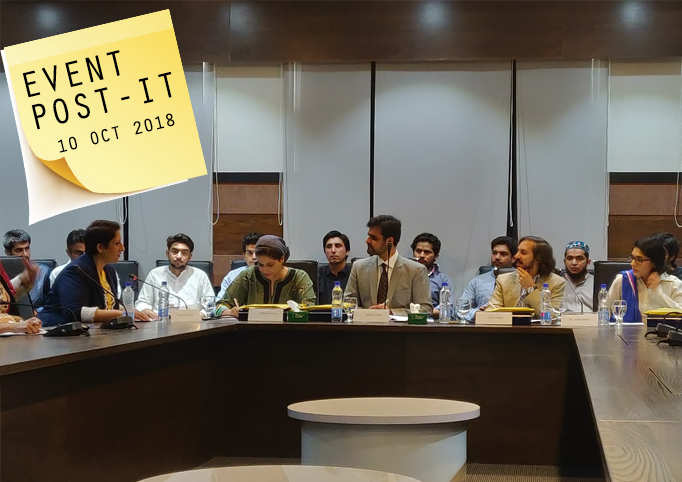 Policy frameworks must imagine Pakistan’s youth cohort as an opportunity to innovate public policy discourse and revitalize an increasingly unimaginative political conversation according to speakers at Jinnah Institute’s University Town Hall on Youth Politics and Policy. The panel discussion, held at the University of Lahore’s Center for Security Strategy and Policy Research, focused on the role that the youth can play in refreshing Pakistan’s outlook on contemporary issues such as political participation, governance, reducing inequity and differentials in education while outlining interventions necessary for allowing the youth to realize its potential. The discussants included Soufia Siddiqi, an ethnographer; Malik Uzair Khan, former parliamentarian; and Mehmal Sarfraz, journalist and TV anchor. The discussion was moderated by Jinnah Institute’s Salman Zaidi.

Malik Uzair discussed the need to remove barriers to entry in policy-making to ensure a greater participation of young minds. Elaborating from his own experience as a young parliamentarian, the former MNA shed light on the approaches that young parliamentarians have taken to long-standing issues such as poverty and health, as well as emerging issues such as climate change. He explained that young people have to work harder to prove themselves within policy circles, and that seriousness of intent, preparation and mentorship can help overcome multiple barriers. Talking about the government’s role in developing the quality of young human resource, he recalled the UNDP’s stress on the provision of education and employment by governments as well as engagement by public institutions. The role of political parties is especially relevant in this domain as they create entry points for youth to make long term contributions to public policy and practice. Political vocabulary and attitudes emerge from within parties and must be paid closer attention to while creating a political culture for youth.

Mehmal Sarfraz stressed that young talent must be mainstreamed in all sectors where perennial, bureaucratic mindsets had created dead-ends. She felt that young people’s ability to effectively communicate with a large number of people through harnessing social media made them better suited to policymaking and delivery. She praised the resilience of Pakistani youth who were creating pathways for themselves professionally despite meager assistance from the state, and finding innovative ways to overcome obstacles. She added that all major political parties had paid lip service to the idea of mainstreaming youth, and that their policy pronouncements on youth did not align with their internal mechanisms. She emphasized that the banning of student unions on university campuses brought a historical end to progressive student politics, as a result of which political party youth wings had been reduced to street-fighting arms. Mehmal recommended the provision of common public spaces, interventions in art, media and culture as ways to improve young people’s participation in public life.

Soufia Siddiqi spoke from her research as an ethnographer and reminded the audience of the vital role that education plays alongside mentorship in empowering young people. She stated that the differentials accruing from private, public and madrassa education were deeply entrenched and could be undone through a uniform system. She observed that young people had far greater access to information and evidence on policy issues, allowing them to negotiate better with policy making structures and improving the quality of their participation in politics. It was unfortunate that millennials did not recognize this advantage and were not mainstreaming issues of public interest as much as they could. Responding to a question on livelihoods, she explained that the latest technological innovations including artificial intelligence could not program human qualities like empathy, which is instrumental in understanding other humans and the wider communities we belong to. Soufia emphasized that educational institutes must work towards imparting analytical skills to young people, as well as develop key human impulses like empathy and creativity.

After a lively Q&A session in which participants shared their own experiences as young professionals and political actors, the session concluded with a vote of thanks to the panelists and the University of Lahore in providing a platform where students and policy experts could engage on key policy issues.

The event was part of Jinnah Institute’s town hall series under the Open Democracy Initiative, which brings Pakistan’s top experts to interact with youth on issues of policy interest.