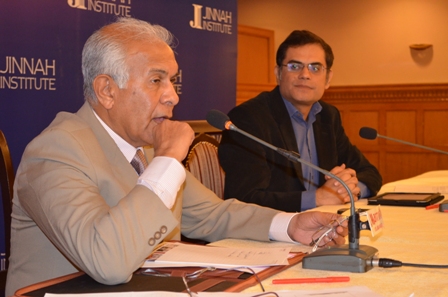 Islamabad – July 25, 2013: An event focusing on the impact and lessons of the Right To Information (RTI) Act in India was held in Islamabad’s Marriott Hotel on Thursday. Mr. Wajahat Habibullah, the Chairman of India’s National Commission for Minorities, spoke as a distinguished lecturer at an event organized by the Jinnah Institute as part of the Indo-Pak Track II peace process.

Mr. Habibullah, who has had a distinguished career as a civil servant and author on Kashmir and human rights issues, spoke on the value the RTI Act held, and how it represented an integral part of any flourishing democracy. Charting the history of the Act, Mr. Habibullah explained how to develop the means and capacity for passing such legislation, as well as outlining the benefits to society and state from its implementation.

Describing the right to information as pouring ‘sunshine’ on the government’s affairs, he asserted that “until that sunlight can shine into every crevice of governance… we must persevere in our quest to make governance ever more participative, more inclusive, which is the essence of democratic governance.”

The lecture was followed by a lively Q&A session, in which members of the audience, comprising of former parliamentarians, civil society leaders, mediapersons and bureaucrats discussed various aspects of the RTI Bill in Pakistan.

Earlier, Raza Rumi, Director Jinnah Institute said that Pakistan had made great headway by enacting RTI as a fundamental right in the 18th amendment and at least two provinces had prepared legislative bills soon to be tabled before the local assemblies. Mr. Rumi added that Pakistan could learn from the experiences of India in implementing RTI especially the challenges and resistance from the bureaucracy.

This is the fourth round of the Distinguished Speaker series, which is part of the activities associated with the Chaophraya Dialogue, a track II diplomacy initiative undertaken by the Jinnah Institute. The Series has enabled an exchange of high profile public speakers including parliamentarians, academics and policy experts.