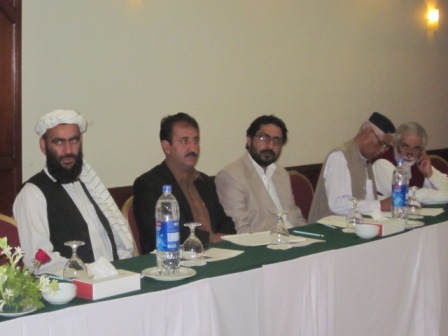 14 February 2013 – Nearly a dozen political parties attended a roundtable on the electoral code of conduct organized by The Jinnah Institute with respect to impending elections in the province of Balochistan here on Thursday.

Participants highlighted security concerns including dispersed polling booths as the key challenges to the holding of fair and free elections in Balochistan. This was the fourth roundtable organized by The Jinnah Institute in its efforts to develop a consensus around the recently issued code of conduct by ECP while collecting the recommendations of political parties to ensure its effective implementation.

Representatives of the Balochistan National Party , Agha Hasan and Khurshid Mir expressed their concerns on the highhandedness of the security agencies and cited lack of trust by Baloch people in the Pakistani State authorities as a major hurdle towards electoral participation. They called for an end to the ongoing operations before the elections so that public confidence increased in the democratic institutions. Other parties however said that the conduct of elections in Balochistan was possible and if necessary measures were taken, the electorate in the province would vote in “reasonable numbers”.

Javed Ahmed Shah, member CEC of PPP said that it was the first time in the history of Pakistan a ruling party is undertaking all possible measures to eliminate the possibility of vote rigging and that his party is fully committed to the holding of transparent elections in the country.

Arbab Hashmi of PMLQ said that if required the military may be asked to provide security and protection to the ticket holders so that polls could be held in a peaceful manner. Participants also suggested that like India we too should consider holding elections in a phased manner so that all chances of sabotage were addressed.

Raza Vakil of Hazara Democratic Party spoke about the recent sectarian killings of the Hazara community and expressed the need to make electoral arrangements more inclusive and secure for all ethnic and religious groups.

The PTI representative stressed that his party is already mobilizing voters via SMS technology.

Representatives of National Party Jan Buledi and Nawab Mohammad Khan Shahwani expressed their concerns with regard to the growing security situation and urged the law enforcement agencies not to aggravate the situation by random arrests of political workers.

Most parties expressed their agreement for electoral code of conduct but suggested improvement keeping in view the geographical and political conditions prevailing in the province.

Raza Rumi, Director Jinnah Institute, said that the route to realization of the rights of Baloch population should be searched through within the constitutional framework and electing true representatives of Baloch people was necessary to improve the situation in the province.