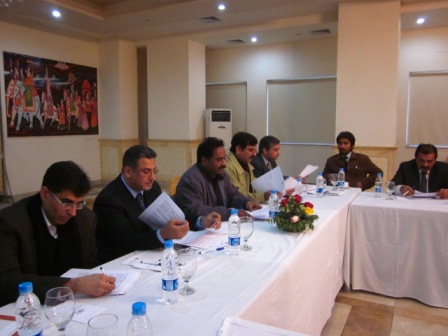 LAHORE, 17 January 2013: Representatives of major political parties agreed to abide by the newly drafted Election Code of Conduct at a roundtable organised by the Jinnah Institute on Thursday, and stressed the need to further empower and strengthen the institutional capacity of the Election Commission of Pakistan.

Tanvir Kaira, Secretary General of the Pakistan Peoples Party (Central Punjab), recommended the modernisation of the election setup with electronic voting machines,to minimise the prospects of rigging. He said that the fairness of elections is contingent upon the efficacy and effectiveness of election tribunals and suggested that complaint-processing procedures be reformed.

Mian Imran Masood of the Pakistan Muslim League, a former Punjab education minister, referred to the case of India, where there is no concept of an interim government, which in his opinion is a major factor tilting political mechanisms in favour of certain interests. Offering insights how to deal with incumbency advantages, he called for the strict enforcement of rules pertaining to the announcement of development schemes, deployment of staff and their training. Highlighting the problems and constraints faced by local election and polling staff, Masood recommended strict monitoring and safety mechanisms for election staff and materials.

Ehsan Ullah Waqas of the Jamaat-e-Islami suggested  obile courts and election tribunals at the local level to ensure the quick resolution of smaller scale disputes. Recommending steps for the effective implementation of the Code of Conduct, Haider Zaman, senior vice president of the PPP in Southern Punjab, urged that election authorities should not rely on traditionally recruited staff from the education and revenue departments. He suggested recruiting election staff from other departments to diversify the exercise. He opined that facilitating voters through the provision of transport is the democratic right of the parties, and it is impossible to put this burden on a resources-constrained ECP.

ZafarSahi of the PMLQ, a member of the Punjab Assembly, suggested that the Election Commission should recruit a pool of competent staff aged 25-40 for a short term to ensure the effective monitoring of compliance with the code of conduct during elections.

Concluding the public debate on the Code of Conduct, Salman Abid, Regional Director of Strengthening Participator Organisation, underlined the need for raising greater societal understanding of electoral processes, which to him is as vital as strengthening the capacities of the Election Commission. He also recommended widening the scope of election monitoring by involving civil society for transparent and credible elections.