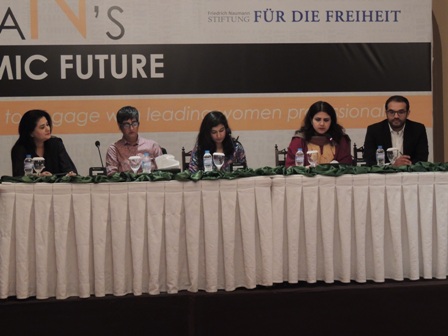 Islamabad: A seminar on women entrepreneurs held in Islamabad concluded with the realization that constraints faced by women in joining the workforce were multilayered and pervasive, yet there was increasing evidence that the entrepreneurial landscape for women in Pakistan is undergoing profound changes.

The seminar, titled Women and Pakistan’s Economic Future, was organised by the Jinnah Institute, and featured Sadia Khan, CEO of Selar Enterprises, Sabeen Mahmud from T2F and Anusheh Ashraf from Invest2Innovate. The discussion was moderated by leading development consultant Ammara Durrani.

Recalling what she described as a ‘non-linear’ career path, Sadia Khan spoke about her journey from Wall Street to the corporate sector in Pakistan. She noted that women faced a greater set of challenges than men in the workforce, and described these in three categories; contextual constraints, economic constraints and what she termed to be soft constraints. Expanding on the topic, she noted that constraints in context and economics make it harder for women to have access to meaningful jobs and directions on how to approach the corporate sector. She also stressed on softer constraints in the form of a lack of mentors, an absence of networks and a lack of training and access for working women, and how these had an equally profound impact on limiting the success of women in the workplace. Noting that her family’s contacts were integral in establishing her own networks, she also brought up the general reluctance towards working with women in non-traditional sectors.

Sabeen Mahmud, the founder of T2F, detailed her personal journey into entrepreneurship, which was driven by a fundamental dissatisfaction with profit-driven endeavors. Sparked by a concern about the lack of community spaces in Karachi, she left a tech company she had co-founded to launch the T2F using money borrowed from her relatives. Stressing on the need for entrepreneurs to retain a sense of naivety about their failures, she spoke on the need for efforts like the T2F to be mission driven, rather than being profit-driven. While describing money as a ‘tyrannical force’, she warned against non-profit efforts which failed to become sustainable. She also detailed the T2F’s recent crowdfunding exercise which allowed her organization to both remain financially independent, but more crucially, entrench its support and relevance in the local community.

Anusheh Ashraf from Invest2Innovate (i2i) talked about how she turned her passion for business into a focus on service-delivery projects, which was how she became involved in impact-driven businesses. Describing these as projects aimed at realizing social change, she emphasized the importance of wealth-creation to ensure that good ideas are realized into sustainable businesses that can create social impact. Describing i2i as a core training program to build capacity, she described how its aim was to “help change-makers become the authors of their own stories.” She mentioned how i2i was developed as a means to close the trust deficit between investors and entrepreneurs in Pakistan, and noted that despite increasing numbers of women applying for investment funds, the gender balance was still extremely skewed.

The moderator AmmaraDurrani expanded upon the importance of failure in entrepreneurship as well as the expectations women face to curb their femininity in the workplace. Anusheh Ashraf added how the idea of an ‘ambitious’ woman was deemed problematic in society, while Sabeen Mahmud suggested using empathy as a way of creating collaborative partnerships. Sadia Khan observed that there was a need to redefine what it meant to be successful to incorporate more diverse experiences and approaches.

The event was part of the Jinnah Institute’s Open Democracy Initiative, which aims to bridge the gap between citizens and the state, and to formulate and articulate policy responses based on inclusive research. The Jinnah Institute is a non-partisan public policy think tank committed to the strengthening of democracy, governance and an independent national security project in Pakistan.