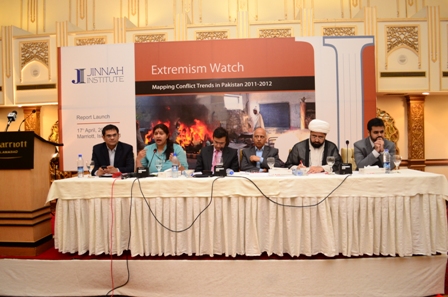 “The insurgency in the province of Khyber Pakhtunkhwa is a war waged against the state of Pakistan, said Ahmer Bilal Soofi, Minister for Law, Justice and Human Rights at a report launch organized by Jinnah Institute. “The issue is not regime specific, but state specific and must be addressed as such, he added, elaborating that Muslim scholars must incorporate contemporary debates in their teaching curricula. He was speaking as Chief Guest as Jinnah Institute’s annual report launch for the publication titled ‘Extremism Watch: Mapping Conflict Trends in Pakistan 2011-2012’. The report maps incidents of religious extremism over the last 15 months and identifies violent and non-violent attacks at Sufi shrines, against Hazaras and other religious minorities.

Raza Rumi, Director Jinnah Institute said that extremism was a long term trend due to mass indoctrination via textbooks, sermons and state policy.  He added that the issue of terrorism should not be confused with extremism though the two are often linked.  He explained that the report recorded 379 incidents of extremism from October 2011 to December 2012, a 67 per cent rise over the 181 recorded in the previous year. The number of casualties, went down with 559 killed and 718 injured across Pakistan, compared with 534 killed and 1, 391 injured in the previous year. The highest number of deaths and injuries, however, were seen in Balochistan, where a wave of violent sectarian attacks against the Shia community killed 190 people.  Sectarian violence was also responsible for the highest death toll across the country, with 525 people killed.

Marvi Sirmed, columnist and human rights activist highlighted the violence and discrimination against Pakistan’s Hindu community. “There is no limit to how badly Hindu low caste women are treated in Sindh. They do not have family laws protecting them and it is impossible to prove whether a marriage or divorce has taken place, due to the State’s policy of legal neglect”. She also explained that sexual violence against women is rampant in the province and there is no recourse to justice, citing several examples of violence against Bheel, Meghwar and Kohli Hindus.

Security analyst Imtiaz Gul stated that most political parties skirt around the issue of militancy and that extremism is a manifestation of systemic failures, that include non implementation of the constitution and violation of the law by state State institutions. He also elaborated that extremism is not a short term phenomenon contained within a specific geography. “If we don’t stand up to this challenge, Pakistan will remain isolated politically and socially.”

Prominent TV anchor, Dr. Moeed Peerzada gave a historical overview of extremism in Pakistan, pinpointing moments in the 1970s when the Ahmadi community was marginalized through a constitutional amendment. He emphasized that a secular polity could not be established thereafter in Pakistan. Dr. Peerzada cited examples from post-World War II Germany where curricula reform and retraining of bureaucracy was undertaken to curb the spread of militancy, violence and extremism. “Decreasing polarization between the Pakistani globalized elite and the religious right in Pakistan is necessary to curb extremism and for progress,” he observed.

Maulana Amin Shahidi, of Mjlis-e-Wahdat-e-Muslimeen said that there was an urgent need for sectarian harmony in the country and the violence against Shia Muslims needed to be checked. He further added that the civil and military institutions of the country should wake up to the dire situation and protect all Pakistani citizens irrespective of their faith, sect and creed. The event was attended by hundreds of people from all walks of life. There was a heated debate on the issue of religious extremism and the imperative of turning Pakistan into a moderate, plural society.