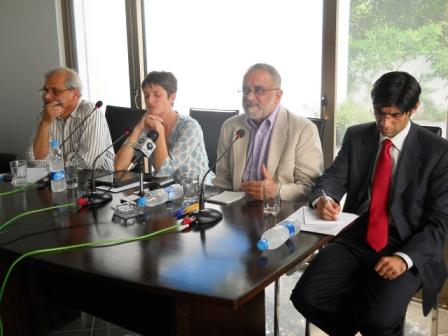 Islamabad, July 12, 2012: Pakistan needs to recalibrate its policy on Afghanistan and commence a much needed dialogue with stakeholders to work out a solution for a peaceful settlement to the conflict, said experts speaking at the 6th Policy Discussion on Pak-US Relations at Jinnah Institute. Pakistan not only needs a rethink of its strategic policy, it needs to engage with the US and other actors involved in the Afghan conflict to overcome divergent strategic priorities. As of now, Pakistan seems to be proceeding without an endgame strategy, they said.

The experts included renowned political commentator Ahmed Rashid, author of Pakistan on the Brink (2012) and Descent into Chaos (2010), award winning journalist Zahid Hussain, South Asia Advisor to USIP Moeed Yusuf and visiting American scholar Rebecca Goetz. They were speaking on the nature of Pak-US relations in the context of reopened NATO supply routes, the bilateral relationship since the Salala incident and the future of the Afghan endgame.

Ahmed Rashid stated that Pakistan needed greater coherence in its policy towards the US and Afghanistan. He felt that Pakistan’s internal crises had created divisions in policy formulation and there was need to resolve differences within. “Essentially countries need to stand on their feet and need to dispense with big powers, increase trade and take part in globalization,” he said. Regarding the nature of the Afghan endgame, he felt there was need for an honest broker in this conflict and perhaps the EU could play this role as all the other players, namely Pakistan, US, Iran, India and the Central Asian states were advancing their own interests.

Moeed Yusuf spoke about how the international players in Afghanistan were pursuing fairly common goals with very divergent strategies. “The ways in which Washington and Islamabad reach their desired goals are polar opposites,” he said, adding that the Pak-US ties  were increasingly subject to “hawkish narratives” from both sides that were exacerbating already fraught relations.  He also felt Pakistan and the US needed to stop viewing each other from a ten year old Afghanistan-lens.

“If Pakistan is living in a state of denial about itself, what about the US?” asked Zahid Hussain, speaking about policies pursued in Afghanistan over the past 10 years. “Admittedly Pakistan has made mistakes, but does that mean the blame for a war fought by 11 armies should be laid at Pakistan’s door?” he commented. Hussain strongly felt Pakistan had been pressured into accepting the decision to open the GLOCs and that the tensions underpinning the whole episode had not gone away.

Rebecca Goetz commented on the negative portrayal of Pakistan in the mainstream American media and how the voting American public was terrified by images of Pakistan as the ‘most dangerous country in the world’. Not only had that led to support for drone strikes, which were purportedly carried out for national security, but also played out in domestic immigration laws. “The way the War on Terror has come home is disturbing, but there is an emerging libertarian nexus that is now asking tough questions about US policy in the region,” she added. Media stereotyping had to be understood and challenged.

Experts concluded that there was a need for fresh narratives on Pak-US relations and for finding a way forward on bilateral and regional issues including that of post-2014 Afghanistan.